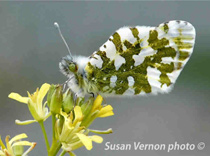 Comments are being taken until on the listing of the Island Marble Butterfly, found only on San Juan Island, as an Endangered Species and the proposed designation of critical habitat. In 2016, the Department of Interior Fish and Wildlife Service determined listing of the island marble butterfly was warranted but was precluded by higher priority listing actions. It was given a listing priority number (LPN) of 3 based on the finding that the species faces threats that are imminent and of high magnitude.

The April 12, 2018 announcement in the Federal Register states:

More information about is available at Federal Register

Comments must be received or postmarked on or before June 11, 2018. Comments submitted electronically using the Federal eRulemaking Portal https://www.regulations.gov/ must be received by 11:59 p.m. Eastern Time on the closing date.

You may submit comments by one of the following methods:

(1) Electronically: Go to the Federal eRulemaking Portal: http://www.regulations.gov. In the Search box, enter FWS-R1-ES-2016-0145, which is the docket number for this rulemaking. Then, in the Search panel on the left side of the screen, under the Document Type heading, click on the Proposed Rules link to locate this document. You may submit a comment by clicking on “Comment Now!”

Send comments only by the methods described above. All comments will be posted on http://www.regulations.gov.