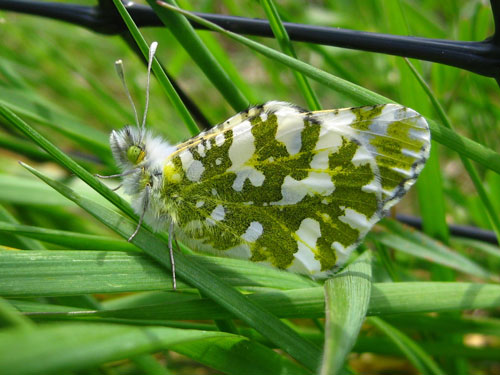 La Conner–The Washington State Department of Fish and Wildlife's (WDFW) enrollment period is still open for San Juan and Lopez islands landowners who would like to participate in a voluntary program to help restore Island Marble Butterflies, a species that could soon be listed as endangered under the federal Endangered Species Act (ESA). WDFW and the USFWS are inviting landowners — especially those with open, grassy landscapes to enroll in a Candidate Conservation Agreement with Assurance (CCAA) to help save the Island Marble Butterfly.

The CCAA is a conservation tool under the ESA. Conservation measures outlined in the Island Marble Butterfly CCAA’s include creating patches of habitat, limiting disturbance to habitat patches, potentially protecting patches through fencing and potentially allowing deer hunting to limit deer consumption of the plants that butterflies depend upon.

Landowners enrolled in a CCAA—including those engaged in agriculture, ranching, recreation, and other activities—would experience no risk of violating the ESA by inadvertently killing or injuring the butterflies so long as they participate in agreed conservation measures. Landowners can also withdraw from the CCAA at any time.

Enrollment in the CCAAs is likely to continue until the Island Marble butterfly is listed under the ESA.

The agreements also provide regulatory surety for landowners who could be affected by ESA regulations should the butterfly become listed as endangered under the Act, as has been proposed.

“We are asking landowners to get out ahead of potential ESA listing and voluntarily adopt a few best practices that will help the butterfly recover,” said Anderson.

Agency personnel welcome CCAA participation with private and public landowners, including those that own or manage state, tribal, non-federal, public or private lands.

"These agreements provide a unique opportunity for landowners to contribute to the conservation of the Island Marble Butterfly," said Acting USFWS Washington State Supervisor, Brad Thompson. "Working together, agencies, organizations and landowners can create and maintain habitat for this rare and beautiful butterfly."

The Island Marble Butterfly does not migrate and is only found on San Juan Island. They are most visible in the spring when they are winged adults. For the rest of the year, they are present as either eggs, caterpillars, or chrysalises. Their primary food source is the mustard plant.

After an Island Marble Butterfly emerges from its chrysalis where it has resided for more than 300 days of the year, it immediately mates and lays eggs on the mustard flower bud, flying only a short time before dying. These characteristics have made this contributor to the islands’ ecosystem vulnerable to a variety of threats.

WDFW is the state agency tasked with preserving, protecting and perpetuating fish, wildlife and ecosystems, while providing sustainable fishing, hunting and other outdoor recreation opportunities. The agency works to keep common species common and restore species of greatest conservation need.