ACCU WEATHER PRESS RELEASE: On May 18, 1980, Mt. St. Helens shocked the nation when it erupted after over a century of dormancy. Now, 40 years later, we look back on that historic day.

On the morning of May 18, 1980, photographer Robert Landsburg hiked seven miles from the summit of Mount St. Helens in the Cascades mountain range. As the lens of his camera viewed the snowy cap of the mountain and lush green forests of Skamania County, Washington, Landsburg intended to photographically document the change steadily occurring.

The volcano was quiet. There had been no eruptions for four days. Rolls of gases vented out of fumaroles, pressure escaping. Seismic activity rumbled below, as it had done since late March. Deformation of the northern face continued at a steady rate, the side buckling outward. About 6 miles to the north, the serene Spirit Lake held a handful of homes and cabins, the majority of them empty of their residents. Harry R. Truman, an 83-year-old resident of the area and owner of Mount St. Helens Lodge, had refused to evacuate.

Five miles from the summit, USGS volcanologist and geologist David Johnston was stationed at an observation post. Over the past month or so, he had been the scientist in charge of studying the volcanic gas and urged officials to resist heavy pressure to reopen the surrounding area. A view of Mount St. Helens from the northeast of Spirit Lake, taken on May 17, 1980, a day before the eruption. (USGS)

Seismologists hadn't monitored earthquake activity in the Mount St. Helens area until seismometers were installed near the volcano in 1972, and from January 1975 through early 1980, only 44 earthquakes had been recorded in the area. However, on the Ides of March in 1980, several small earthquakes indicated the start of possible volcanic activity, according to the United States Geographical Survey (USGS). From March 15 through March 21, more than 100 temblors occurred within 22 miles of Mount St. Helens.

However, it was a 4.2-magnitude earthquake on March 20 just northwest of the summit that caught the attention of seismologists. The quake triggered avalanches from the snowy peak, and activity continued the following day. Monitoring increased, and the United States Forest Service (USFS) closed the mountain above tree line over concern for earthquake-triggered avalanches. By March 24, scientists were convinced that the earthquakes could be the writing on the wall for renewed volcanic activity.

Any doubts of this were erased on March 27 when people near the volcano reported hearing a loud "boom" from a steam-driven explosion called a phreatic eruption. The eruption formed from magma rising below the surface and meeting ground water, steam and pressure building up underground before bursting. A black plume from the explosion was observed rising 7,000 feet above the volcano.

As seismic activity intensified and strengthened, the public grew restless. Phreatic eruptions continued, drawing crowds of scientists and tourists. Johnston was one of the first members of the USGS monitoring team to arrive at the volcano, and he was part of the efforts to persuade authorities to limit access to the area. 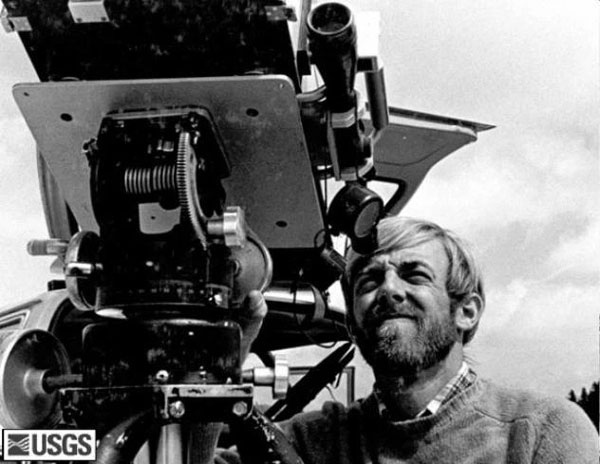 The USGS described a "carnival-like atmosphere" around Mount St. Helens as volcano sightseers gathered around view points such as Silver Lake, about 30 miles away.

On March 31, The Cowlitz County Commissioners declared a state of emergency to address roadblocks and standby in case of orders for evacuations. Public reactions, Vancouver Columbian reported, varied as calls flooded USFS personnel. The calls ranged from people expressing their frustration over not being able to access their cabins within closed areas while members of the press were allowed through to gamblers requesting the number of explosions within the past 24 hours.

On the south shore of Spirit Lake, a lake about 6 miles north of the volcano, local Harry Truman was the only resident of the lakeside who refused to leave his home.

"I think the whole damn thing is overexaggerated ... Spirit Lake and Mount St. Helens are my life ... You couldn't pull me out with a mule team," Truman told the Longview Daily News.

Even after then-Washington Gov. Dixy Lee Ray declared a state of emergency, tourists flocked to Milepost 33 on State Route 504 near the roadblock. Peering eyes took to the skies as well. The Federal Aviation Administration (FAA) reported 109 planes inside the restricted zone around the volcano on April 3. 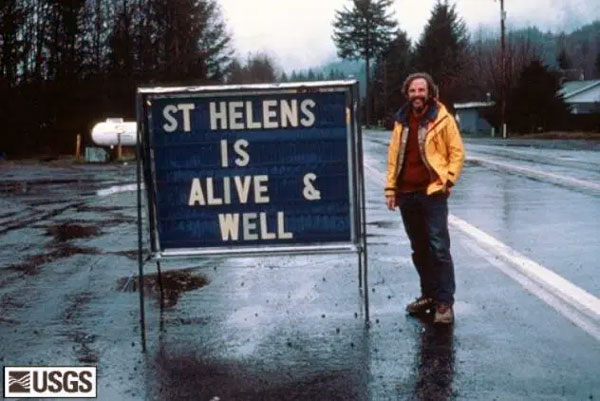 A sign along the road leading to Mount St. Helens. Despite protests against the roadblocks, restriction to areas near Mount St. Helens prevented the death toll from reaching the hundreds or even thousands, scientists estimate. (USGS)

Businesses began threatening to sue officials over loss of business as the blockade line shifted. Despite public pressure, Johnston and his USGS monitoring team resisted the idea of reopening certain areas.

"One of the problems we're having ... is that people in the Northwest have never faced this kind of thing before ... I feel the general public really doesn't understand the danger," USFS spokesman Jim Unterwegner said.

During late April, explosions slowed and then stopped. Scientists and officials remained wary, however. Aerial and ground surveys confirmed a bulge about a mile long and one-half-mile wide on the northern side of the volcano. A few scientists, including Johnston, believed this could suggest the volcano would produce a lateral blast rather than an eruption from the center. 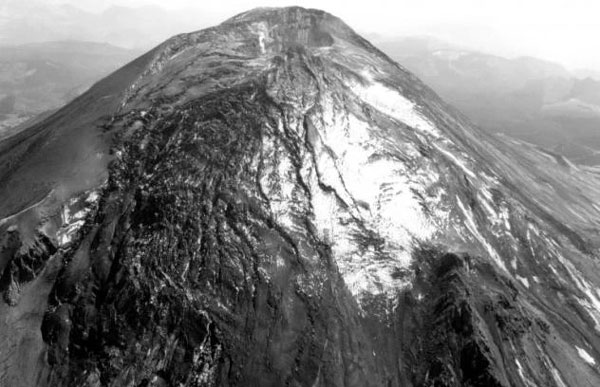 The bulge on the northern face of Mount St. Helens before the May 18, 1980 eruption. (USGS)

Two USGS observational posts, Coldwater I and Coldwater II were established to monitor changes and found the bulge on the northern side of the mountain was growing at a rate of 5 to 8 feet per day. Coldwater II was located just 5 miles north of the summit.

A Red Zone was established on April 30, consisting of a boundary from 3 to 7 miles out from the peak. Only scientists, law enforcement and other officials were allowed into this area. Access to the newly established Blue Zone, skirting the area around the Red Zone, restricted access during daylight hours to loggers and property owners with special permits.

Property owners in the Spirit Lake area, which sat in the Red Zone, increased pressure on authorities to allow them access to the homes they had been forced to leave. Some even threatened to converge on some of the roadblocks in numbers and break through. On May 17, in the shadow of a quiet mountain, law enforcement officers escorted about 50 carloads of property owners into the Red Zone to retrieve their possessions, according to the USGS. The civilians who entered the area were required to sign liability waivers at the roadblocks and were asked to leave by nightfall. Authorities had agreed to escort another group at 10 a.m. the following morning. 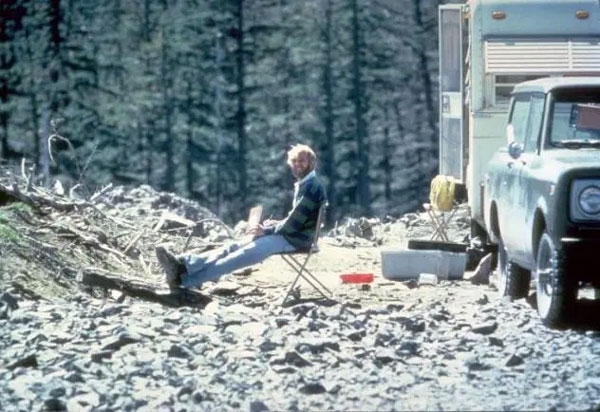 At 8:32 a.m., a 5.2-magnitude earthquake struck, causing an avalanche from the walls of the summit crater and destabilizing the northern face of the volcano. The entire north flank quivered before appearing to almost liquify. As the northern face slid from the cone of the volcano in a stony avalanche, a blast broke through the remaining barrier. For the first time in nearly a century, Mount St. Helens erupted. 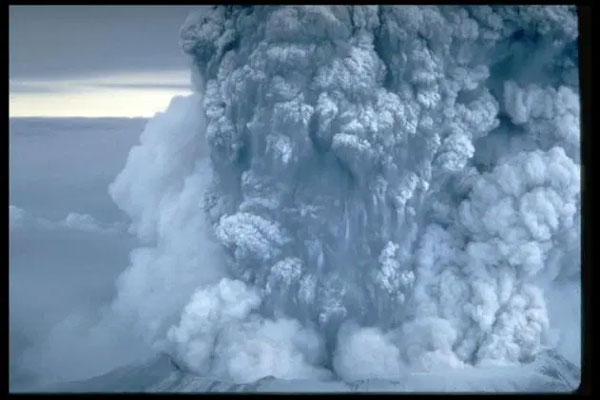 An ash plume from the eruption of Mount St. Helens on May 18, 1980. According to the USGS, the plume moved eastward at an average speed of 60 mph, the ash reaching Idaho by noon. (USGS)

"Vancouver! Vancouver! This is it!" Johnston transmitted over the radio before the line was cut short.

Ash and debris spewed outward with a force that decimated the densely forested area within about 6 miles of the summit. The scope of the full blast reached about 12 miles out, knocking over nearly all remaining trees. The trees at the outer limit of the blast that survived were left seared. 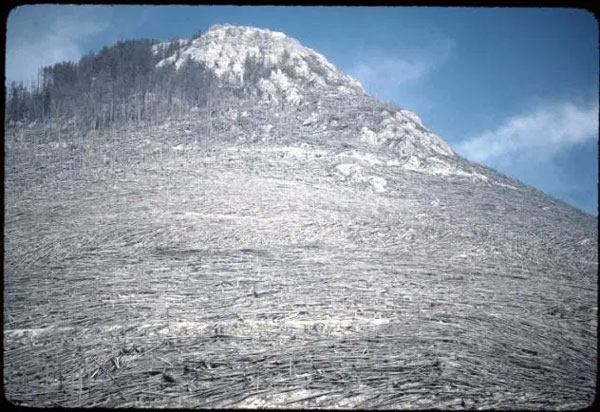 The blast from the eruption of Mount St. Helens knocked down heavily forested areas near the mountain. (USGS)

About 7 miles away from the summit, Landsburg watched the inescapable wall of ash approach through his camera lens. He snapped a few photos, rewound the film back into its case, stored his camera in his backpack and lay down on top of it to protect the contents.

The pyroclastic flow swept over Landsburg, burying him and his camera bag.

Landsburg, Johnston and Truman were three of the 57 people killed by the eruption. Had Johnston and his monitoring team not resisted heavy pressure to reopen the area, the USGS believes the death toll would have been in the hundreds or even thousands.

Seventeen days later, Landsburg's body was found with the film slightly damaged from the heat, but intact. The photos of the eruption and approaching wall of ash were published in the January 1981 issue of National Geographic. 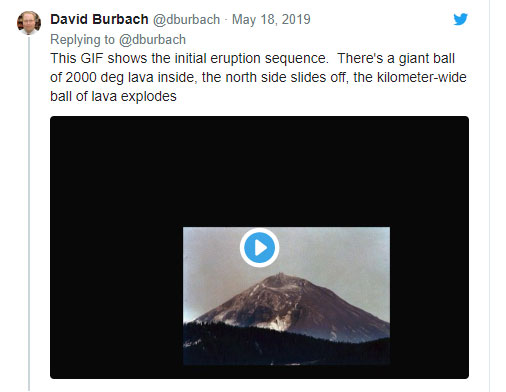 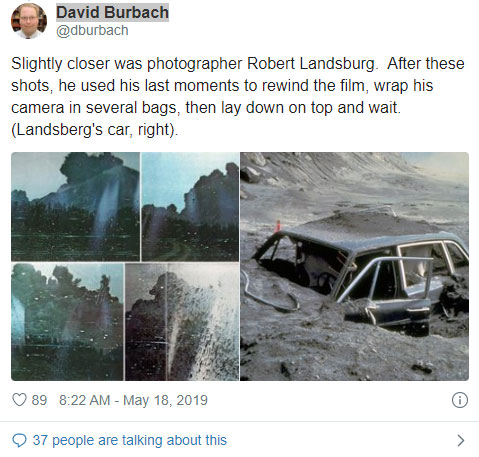 About 11 miles away from the summit, photographer Gary Rosenquist had picked up his camera and fired off a series of snapshots as the northern face gave way. He had been camping at Bear Meadows with a few other people, all of whom managed to survive the blast. His photographs of those first 40 or so seconds were later stitched together to create a timelapse of the event. 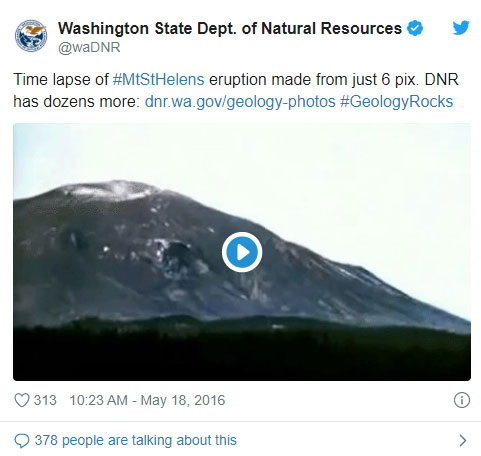 For days after the eruption, volcanic ash lingered in the air around the area. Residents took up wearing face masks while outside due to possible health threats. Many larger animals that had been in the blast zone, such as bears, deer and elk, had not survived. All fish in Spirit Lake had died, according to the United States Department of Agriculture. 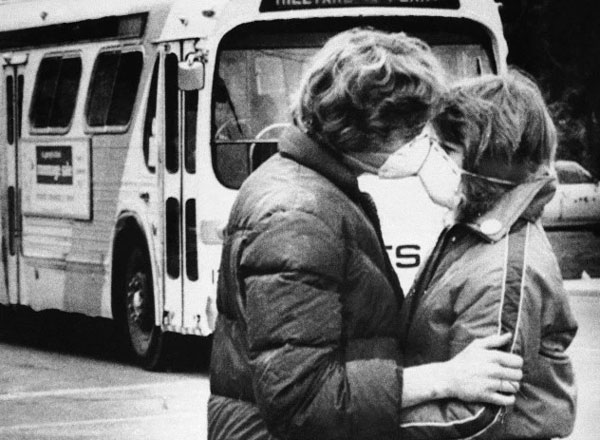 Fifteen-year-old Heidi Havens gives Allen Troup, 16, a kiss as he prepares to board a Spokane City bus, May 27, 1980. Spokane residents have had to wear face masks while outside for nine days now because of possible health threats from volcanic ash sprayed over the area by Mount St. Helens on May 18. Having had them on for so long, some people are obviously forgetting. (AP Photo/Ralph Viggers)

Now, 40 years later, the land decimated by Mount St. Helens is still healing. Animals slowly began to return to the blast zone as new vegetation took root. Parts of the land have not returned to how it was before, however. Mount St. Helens, once the fifth-tallest peak in Washington State, lost about 1,300 feet from its height of 9,677, according to the USGS. The highest part of the crater rim on the southwestern side reaches 8,365 feet in elevation.

As a commemoration of the 40-year anniversary of the historic eruption, the USGS Library has compiled an online exhibit featuring images, reports and other content from the USGS response to the eruption.