A global study into urbanization's impact on white clover shows that the plant is evolving to survive alongside us in Puget Sound.

As the climate crisis becomes harder to combat, more people are trying to live sustainably. Many of us are making small lifestyle changes — reusing bags, buying organic and even growing our own food. But making better everyday choices is probably not as healing to this planet as fixing the communal systems governing how and where we live. 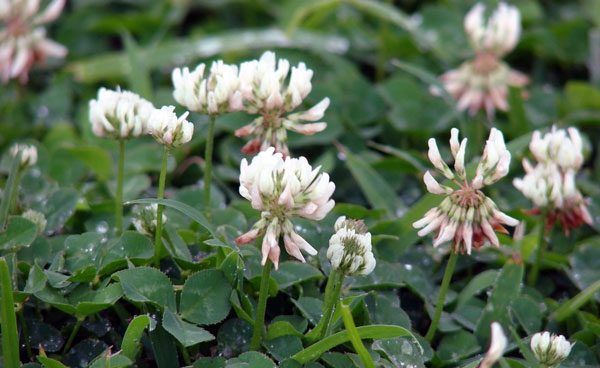 Urban design is one big potential source of healing. The ways we build cities — from the amount and organization of roadways and parking lots to the plants we use to decorate our lawns — influence not only how wildlife behave, but how they physically evolve.

New global research from the University of Toronto Mississauga supported by Seattle-area scientists is capturing attention for investigating how urban environments influence the plants that grow within them, in ways that are good or bad, depending on your perspective. The project’s most recent paper, published in the journal Science (and appropriately on St. Patrick’s Day), explored whether patterns of urban and rural development in 160 different cities influence white clover evolution. The study suggests white clover evolves differently based on its distance from city centers, and that the same patterns of evolution are repeated around the world.

However, clover doesn’t adapt monolithically. In Western Washington, for example, Seattle and Tacoma saw different results. This suggests that something about city environments stresses these plants to change if they are to survive alongside us, but there are important between-city differences.

“Species that we're sharing space with react to what we do, both on an individual action level, as well as a collective one. I think that's really the coolest thing,” said Karen Dyson, an urban ecologist in Seattle with the University of Washington Urban Ecology Research Lab, who collected clover in Tacoma for the study. “We are a part of the environment, and this is actually showing that.”

Not every urban species is likely to adapt to cities as easily. To preserve the kind of biodiversity that helps more urban plants and animals survive, understanding the subtle local differences between cities could be key to climate-proofing our neighborhood ecosystems.

When you pass neighbors’ yards, you might notice lawns full of the teardrop leaves and pompom flowers of white clover. The plant has gone in and out of fashion in landscaping since the 1950s, but clover lawns are on the rise again: People are looking for lower-effort, pollinator-friendly alternatives to grass that thrives with less water, herbicides and fertilizer.

Those strengths also helped white clover spread successfully from its native Europe to most places where people live. That omnipresence makes it a good species for global ecologists to study. Dyson called it “quietly invasive” — not as destructive as something like Himalayan blackberry or Scotch broom, but it holds its own in new environments.

Dr. Marc Johnson, a professor of biology and director of the Centre for Urban Environments at the University of Toronto Mississauga, had been studying clover evolution’s response to urbanization for a few years with students and colleagues, starting with a handful of East Coast cities.

“It kind of occurred to me, ‘Wow, like, we could do this [study] across the entire world… to understand whether environmental change due to urbanization is, first of all, similar when you go from, let's say, Seattle to Shanghai, or Tacoma to Tokyo; and whether those environmental differences, even over different parts of the globe, can lead to similar evolutionary changes,” Johnson says.

Thus was born the Global Urban Evolution Project, or GLUE, with hundreds of researchers investigating whether clover can adapt the same way in different cities.

A total of 287 researchers collected clover samples in 160 cities, including Seattle and Tacoma, and used a standardized kit for analysis. They also sent samples to Johnson’s team for whole genome sequencing. They sampled from places along an urban-rural gradient—that is, from places that have the kind of high building density that screams 'city,' to less dense ones farther from city centers.

The UW’s Dyson and colleagues sampled dozens of Tacoma-area sites, from road verges and downtown parks to horse pastures 20 miles outside the city.

Evolutionary biologist Ken Thompson, a fellow at Stanford University, sampled 40 Seattle-area sites with a colleague in June 2018 from areas as urban as Denny Park and around the Seattle Public Library and the King County Courthouse downtown to as rural as the firehouse at Lake Roesiger east of Everett.

After years of research, the team noticed the same patterns in hydrogen cyanide production: Plants seemed to produce it less in urban areas than in more rural ones.

The researchers determined that not every city puts pressure on clover to evolve, but nearly half of the cities they studied had conditions that put clover on an evolutionary path. In the majority of those cities where evolution is happening, urban clovers are less likely to produce the defensive chemical than their more rural peers. But in a minority of them, the researchers found just the opposite pattern.

In cities where urban areas have fewer plants than in rural areas, fewer herbivores show up to eat them. That puts less pressure on the plants to produce hydrogen cyanide.

But differences in a few aspects of urban environments could explain why evolution doesn’t have the same pattern in every city — aspects like drought, aridity and snow levels. Drought especially seems to play a role. Clovers produce more hydrogen cyanide where water is scarcer, Johnson said.

“What's causing a specific difference in Tacoma and Seattle … is most likely to be one of those two variables,” drought conditions and vegetation, Johnson said.

Evolution happens through natural selection, and in the case of urban clover, it appears to be happening rapidly.

Jennifer Vanderhoof, a senior ecologist with King County who monitors biodiversity and who wasn’t involved with this research, said the scale of the study is impressive. “The scope and breadth of sample locations, and the sample size are remarkable — as is the number of authors,” she said. Johnson said 126 of the co-authors were students.

But the study has limitations. The researchers evaluated the impacts of certain environmental conditions like snowpack and air temperature at single points in time, Vanderhoof said, rather than as trends or averages.

Dr. Max Lambert, a senior scientist with the Washington State Department of Fish and Wildlife, who was not involved with the study, said that while it shows a pattern, it isn’t that consistent, which tempers how much can be concluded from the results.

“They have a similar pattern popping up in multiple places, but they have functionally two patterns — a positive and negative [gradient] — which is interesting. And they have most sites showing no pattern, which I think is also a very interesting pattern to me, but does complicate our understanding,” he said.

Lambert noted that urbanization can mean more than one thing.

“It’s likely we’d find similar types of changes to be relatively common in many highly adaptable species, if we had the resources to look,” Vanderhoof said.

“Knowing that species are rapidly adapting to urbanization implies that in order to design resilient cities we need to take into account evolutionary change,” said Dr. Marina Alberti, a professor at the University of Washington who sampled with Dyson. Intentionally coaxing species to adapt poses important ethical questions, Alberti said, adding that we have the responsibility to think about evolutionary impacts when making design and natural resource management decisions.

Approaches that boost biodiversity in one place may not work somewhere else.

“For all the … species whose ability to adapt to changing conditions cannot keep up with the speed with which our climate is changing, our best bet is the protection of not just singular habitats but rather of entire ecosystems and suites of ecosystems,” Vanderhoof said.

Whether it’s a good or bad thing that clover can adapt in this way depends on your perspective.

“If you care about conservation, then adaptation to cities and how humans are influencing evolution is a pretty darn important thing, and maybe a positive thing when they can adapt. But you can also understand why it may have negative consequences,” Johnson said.

If clover survives, so too may species that depend on them, like pollinators. But we don’t get to choose which species have this evolutionary edge, and some of them may be invasive species that unsettle ecosystems, like zebra mussels; or species we consider pests, like bedbugs. Insecticides worked on bedbugs — until one bedbug with a helpful mutation passed on that mutation to its offspring. Johnson compares this to the coronavirus evolving to evade our vaccines.

Some species that we want to survive — rare or keystone species — might not adapt on their own in certain places. In that case, humans may need to introduce hardier individuals from other populations to give biodiversity a fighting chance.

Ultimately, Lambert said, changing human behavior may be the safer path than hoping plants adapt to us on their own.

Vanderhoof said biodiversity work is complicated by how interrelated species can be; something that helps one species might negatively impact others. And even with plenty of money and political will to put biodiversity measures into play in cities, management may still get down to the question: What should we protect?

“Climate change is going to throw these populations a series of whoppers going forward, and those whoppers are probably going to be most pronounced in urban areas,” Lambert said.

“The best things we can do and advocate for are the things we already know: reduce carbon emissions, protect undeveloped lands, especially those with wetlands and aquatic systems. … The list is long,” Vanderhoof said.

He challenged people to turn whatever outdoor space is available to them into “mini-national parks,” increasing biodiversity of native species, however they can. “This may be as simple as a hummingbird feeder, or as elaborate as converting their lawn to a natural meadow,” he said, much as he did with his Mississauga lawn.

Meanwhile, Johnson’s team in Toronto is continuing to uncover explanations for some of the patterns. At least eight related projects tackle different questions, from whether and how other regions of clover genomes change because of natural selection to the role of climate change in adaptation — which Dyson thinks might help explain some intercity differences.

That not every city studied produces the same effects on clovers gives Dyson hope for species that are "human tolerant" — those that survive alongside humans, even if they don’t thrive. “It means that things are probably not universally bad, if that makes sense.”