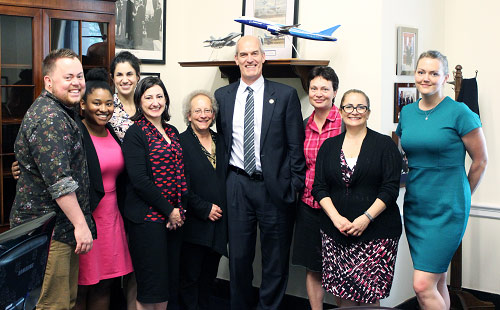 Rep. Rick Larsen (WA 02) at a visit to the Planned Parenthood office in Friday Harbor in June 2016

“As someone who will always stand strong for the reproductive rights of all women and who has been consistently endorsed by Planned Parenthood since joining Congress, I share the alarm of millions of Americans today as they learn of the draft Supreme Court decision to overturn Roe v. Wade.

“If it stands, this will be an outrageous attack on women across America. We must not let it stand.

“As Gov. Jay Inslee has said, women in Washington state know that their right to reproductive health care will remain protected. But in far too many states, automatic trigger laws will go into effect the moment Roe v. Wade is overturned, transforming abortion from a legal practice to a criminalized act in an instant. We need to stand for the rights of women everywhere in the United States – regardless of the position of the Supreme Court.

“After years of speculation about the possibility of the Supreme Court overturning Roe v. Wade, we are now at Red Alert. Everyone in this country who cares about women’s reproductive freedom must urge the Senate to pass the Women’s Health Protective Act to codify a woman’s right to make her own reproductive choices.

“And we must fight as hard as we can in this upcoming election. If voters in Washington state and across the country needed a reason to support Democrats in 2022, the choice is clearer than ever. Only by keeping Congress blue can we protect reproductive freedom for all women.”