Washington News Service: A totem pole from the Lummi Nation in northwest Washington is traveling across the country as part of a bid to call for clean energy and environmental justice. 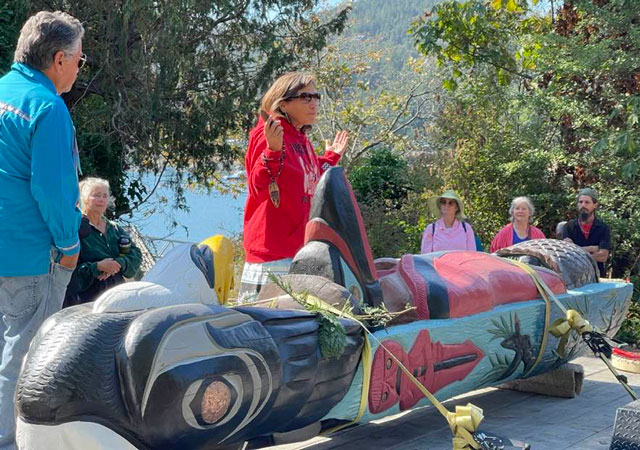 The Lummi Nation totem pole traveled through the islands of Puget Sound before making its way to the East Coast. Freddie Lane photo

The pole left the Lummi Reservation in mid-September and has made stops along the way, including in Seattle, George Floyd Plaza in Minneapolis, and in Pittsburgh - which hosted a ministerial meeting on clean energy last week.

Douglas James is a member of the Lummi Nation's House of Tears Carvers - which crafted the 14-foot totem pole - and he is traveling with it across the country.

"We're just standing up for those that don't have a voice," said James, "like the birds, the frogs, the salmon, the orcas.

The totem pole is scheduled to reach Washington, D.C. this week

James said the Lummi Nation first dedicated a totem pole to the victims of September 11th, two decades ago.

Wes Gillingham, the associate director of Catskill Mountainkeeper in New York, is traveling with the totem pole as well.

He said he's critical of some alternative fuel sources being proposed - such as what's known as "green hydrogen," which has a reduced carbon footprint but still produces emissions.

He said indigenous people should be at the forefront in the transition to clean energy.

"Listen to the voices of indigenous leaders and communities that have been impacted historically," said Gillingham. "They are working on finding some of their own solutions; organic or sustainable agriculture to help reduce the emissions from the agricultural industry and industrialization of agriculture that's taken place over the last 50 years."

James said he believes it will take a monumental effort to beat climate change and ensure clean air and water for the next generation.

"It's going to take every one of us," said James, "everybody that's living and breathing upon this planet, to try and do the best that we can to stand and make a difference."

More in this category: « Bill introduced to thin out the 900K pieces of orbiting junk that endanger the future space economy Study: 100% Survival of Adult Salmon released from commercial Fish Traps in Columbia River »