The sinking of the 49-foot fishing boat, Aleutian Island, occurred at approximated 10 a.m. Saturday morning, August 13 off of Sunset Point on San Juan Island. No action to contain the spill was apparent for the first 24 hours after the sinking.

David Blackshaw, a 45-year resident of San Juan Island, is a commercial fisherman, an enthusiastic diver and has a great deal of experience setting booms to sequester spilled diesel and oil. "It was sad no one was there," he said. "No booms had been set." 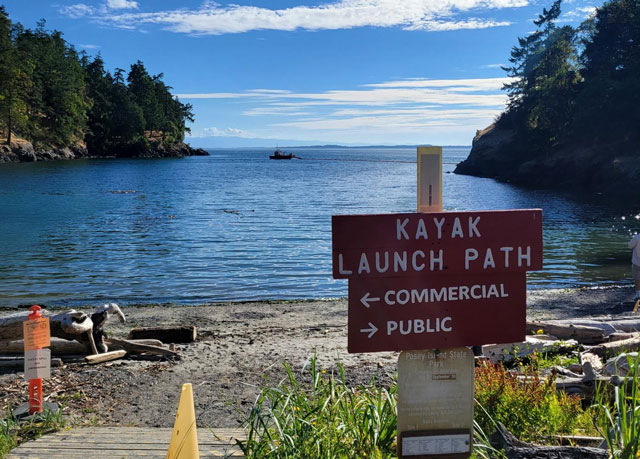 Sunday evening, approximately 30 hours after the sinking of the fishing boat, a boom was set to keep the oil/diesel out of the bay at San Juan County Park. An offer by an experienced private citizen to set a boom during low tide had been rebuffed 14 hours earlier. Photo by David Blackshaw

Realizing that low tide would occur in the early hours of Sunday morning, he gathered his equipment and headed toward San Juan County Park. "The tides were coming in and the winds were blowing south," he said. "It was the perfect setup (to contain the  spillage)." He knew he couldn't save the whole west side but at least he could prevent oil and diesel from damaging the park's waterfront.

He arrived at the park around 3:30 a.m. and was wading in the water with a spotlight preparing to get to work. The park managers saw him and asked what he was doing.

Blackshaw said they were excited and thought it was awesome that he was taking action. They did have some hesitation about whether they had authority to approve his action. So in an abundance of caution, he called the Coast Guard. To his dismay, he was told he would have to fill out forms and fax them to the Coast Guard in order to get permission. He explained he had only 90 minutes to set his equipment in order to take advantage of the low tide.

Further conversation did not improve the situation and he wasn't authorized to proceed.