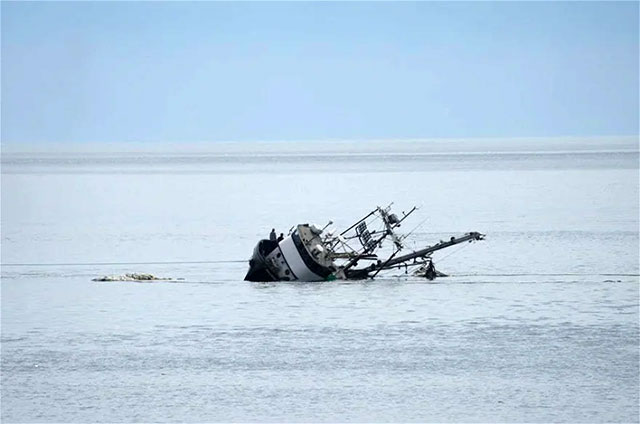 This morning, a Remote Operated Vehicle (ROV) was deployed to help get a clear picture of the state of the Aleutian Isle. The vessel remains upright at over 200-feet below the surface. The vessel is oriented bow up on a slope with the bow at approximately 210-feet of depth and the stern at approximately 240-feet of depth. Netting and rigging obscured part of the view on the port side, but operators of the ROV were able to see that no major fractures appeared anywhere on the hull and the fuel tanks remain intact.

The depth of the wreck poses hazards for divers while they work. They now must use specialized oxygen mixtures and a decompression chamber upon returning to the surface. The increased depth also limits the amount of time divers can stay on scene with the vessel. These factors, combined with significant currents in the area, have necessitated diving operations be limited to periods in and near slack water. Dive vessels have temporarily departed the scene to gather additional specialized equipment required for the depth. The contractor also has additional specialized deep-water divers arriving in the area to assist with response efforts.

“Responding agencies are working diligently to create a safe and effective plan to respond to the pollution threat and minimize environmental impacts,” said Cmdr. Jon Ladyga, Federal on Scene Coordinator. “The contractor is assessing all available options and I have full confidence in our crews.”

The 3,800-feet of absorbent boom placed throughout the affected area yesterday remains in the same spots. This booming is placed as a precautionary measure.

A light visible sheen was spotted by surface crews this morning and was confirmed by drone and helicopter overflights. The recent confirmation of the intact nature of the tanks by the Coast Guard’s ROV confirms that this sheening is caused by diesel escaping in small amounts from the vents on the vessel. Diesel is significantly lighter than water and naturally disperses in the water column or evaporates quickly, especially during the warm temperatures currently in the area. 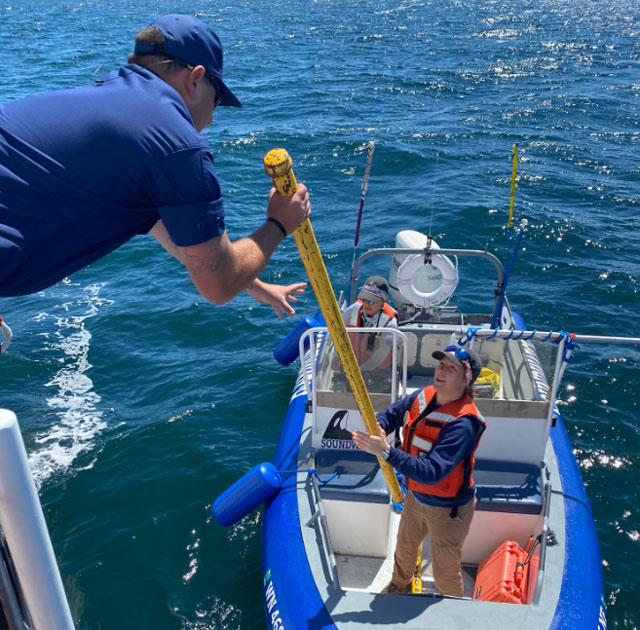 A volunteer with the Whale Museum's SoundWatch program passing an Oikomi pipe to a crew member from the CGC Terrapin. An Oikumi Pipe is a specialized device used by trained personnel that helps deter marine mammals from entering an area.

A paramount goal of the Unified Command remains the protection of all marine mammals, including the Southern Resident Killer Whale (SRKW) population. A dedicated wildlife team conducted an area assessment both along the shoreline and in open water; no marine, terrestrial, or airborne wildlife appear to have been affected by the pollution incident.

The Department of Ecology continues the community air monitoring program, noting that no monitors have shown any levels above normal. 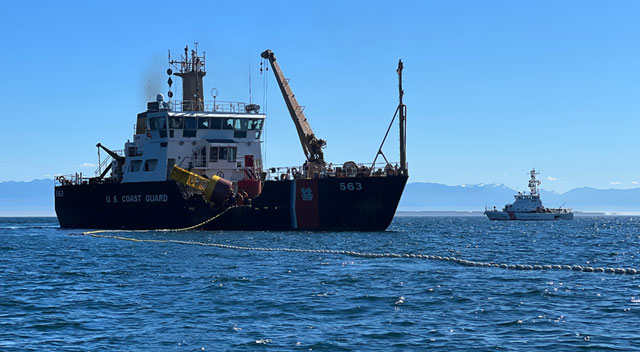 Coast Guard Cutter Henry Blake, a 175-foot buoy tender, was on scene again to recover more netting from the seafloor. A second net weighing 400 lbs. was observed by divers submerged at approximately 100-feet and was lifted by crane out of the water. Approximately 1,400-feet of netting have been recovered by the crew of the Henry Blake and dive crews over the past two days. Five dogfish were found entangled in one net, one of which was successfully released. No other animals were found entangled in the recovered net.

To ensure a safe work environment, safety zones extend 1,000 yards around all responding dive boats. The Coast Guard continues to manage vessel traffic in the area. Crews on scene can be contacted directly on VHF marine-band radio channel 16.

The Unified Command consists of the Coast Guard, Washington State Department of Ecology, San Juan Office of Emergency Management, and the Swinomish Tribe.

An incident-specific webpage has been created by the Washington Department of Ecology. Additional photos of the response can be found on Flickr. Developing updates will also be posted periodically on the U.S. Coast Guard Pacific Northwest social media accounts listed below.