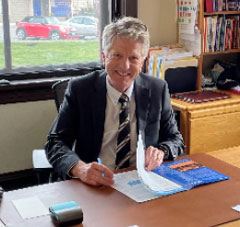 On March 9, 2022, San Juan County Prosecuting Attorney and Coroner Randall Gaylord said he will not seek an eighth term. His seventh consecutive term expires on December 31, 2022.

“I attribute the success of this office to the great group of people who have agreed to work under my leadership and serve the people of State of Washington and San Juan County,” said Gaylord.

Gaylord said he was fortunate to be able to rebuild the legacy of former prosecutor Gene Knapp by hiring two of the deputy prosecutors from his office. “Charlie Silverman stayed 19 years and Karen Vedder who still works on special projects for the Land Bank. After they left, others made their way here with equal skill and dedication.”

Gaylord had a general civil practice in Eastsound before he ran for prosecuting attorney in 1994 at age 37.

The first campaign was a contest between Gaylord from Orcas and Fred Weedon from Lopez. “At the time the ferry was very reliable and dependable with good inter-island service. Given the demands of the job and running an office, the uncertainty of ferry travel today makes it nearly impossible for an elected official to commute daily from Orcas, Lopez, or Shaw Island.” said Gaylord.

Gaylord pointed out that in a small county, the elected prosecutor/coroner is in the trenches with the rest of the office and needs to be accessible all the time. “I love this job, but the dark and sad events we deal with all the time are becoming more of a challenge. It’s been 40 years since I enrolled in law school and charted this course. I have other things to do, so I’m going to step aside for the next leader,” he added.

Gaylord said between now and the end of the year he will focus on resolving civil matters and criminal cases that need his personal attention and work for a smooth transition to his successor.