LAND BANK PRESS RELEASE: A judge has confirmed public access to the 180-acre Mount Grant Preserve. This means that the 180-acre Preserve will remain open to the public from Beaverton Valley Road on San Juan Island. Some signage will be necessary to show alternative access to the 70-acre property that adjoins the preserve. 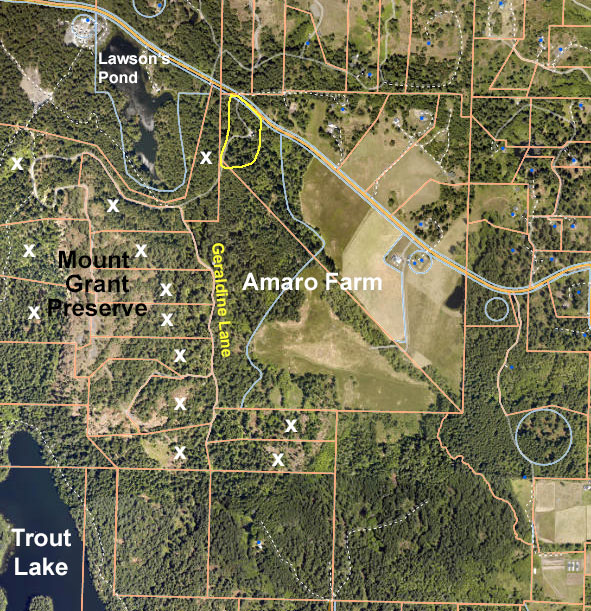 The area circled in yellow is the easement  which includes the parking area and the entrance from West Valley Road.

The court ruling came in response to a lawsuit filed last year by Lance and Rami Amaro against San Juan County and the San Juan Preservation Trust. Snohomish County Judge Richard Okrent, who had been appointed for this case, ruled based upon the documents submitted to him.

Judge Okrent ruled that the existing written easement burdening the North end of the farm property of Lance and Rami Amaro allows the public to access the 180-acre Mount Grant Preserve from Beaverton Valley Road.

Lincoln Bormann, Conservation Land Bank Director said, “With this issue at rest, people can feel secure that the public will have the opportunity to enjoy the Preserve without change.”

“We were confident that the plain language of the easement document made it clear that the Land Bank and the public had access. The case was made based upon basic principles of easement law.” stated Jon Cain, Deputy Prosecuting Attorney for the County.

Angela Anderson, Executive Director of the San Juan Preservation Trust added, “This really is a great outcome for everyone. Hopefully, we can all move on together to keep the Preserve the amazing resource it has become for all islanders.”

The judge clarified that his ruling did not grant access to another 70 acres to the west because they were not part of the original plat subject to the easement. That 70-acre piece is accessed from Lawson Road. The Land Bank expects to allow public access to this low-lying area, but it is unlikely, now, that connector trails will link the 180-acre Preserve and the 70-acre piece.

The court further clarified that public cannot use the access easement to take in the view of Trout Lake from an overlook near the summit. “The public can expect to see signs that will direct people away from the overlook,” added Bormann. Previously, the Town of Friday Harbor had granted a trail easement to the Land Bank to allow people to view Trout Lake.

In other rulings, the judge dismissed the claims for damages based upon claims that the County had interfered with a real estate contract, or that there had been “inverse condemnation,” or a takings because of public use of the Preserve.

“With these rulings on the major subjects, the focus can turn to the few remaining issues in dispute,” added Cain. “We understand the Amaros have other topics to discuss typical of any public use area, such as bathroom locations, fences and signage, and other topics. We look forward to working through the remaining issues of the lawsuit as soon as possible.”

EDITOR's NOTE: The Land Bank's refusal to work with the Amaros on four issues - a garbage receptacle, location of restrooms, indemnity, and a fence - is what led to the couple filing the lawsuit.

Mount Grant Preserve Rising to 750 feet through ancient Douglas-firs and rocky outcrops, the summit road on Mount Grant Preserve on San Juan Island provides visitors of all mobilities the chance to appreciate one of the most dramatic vistas in the islands. New trails for hikers, mountain bikers and equestrians also provide wonderful ways to experience the Preserve at everyone’s own pace. Mount Grant Preserve’s lower parking area is open seven days a week, 365 days/year. The Summit Road is open to vehicles on Sundays throughout the year and Wednesdays April-September. The Preserve is day use only. Please leash your dog and “leave no trace.”