OLYMPIA – Deployment of emergency measures to control invasive European green crabs on the Washington Coast and at sites within the Salish Sea is well underway, including the implementation of an Incident Command System (ICS) to facilitate statewide coordination between various agencies, tribes, and partners. 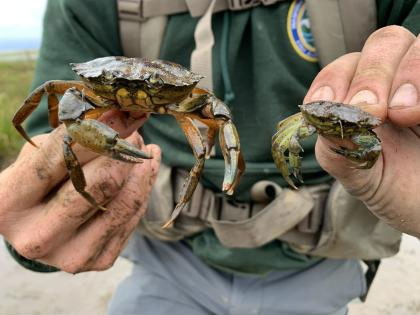 The European green crab (Carcinus maenas) is a globally damaging invasive species that poses a threat to native shellfish, eelgrass, and estuary habitat critical for salmon and many other species.

At the request of Governor Inslee, WDFW, Washington Invasive Species Council, several Native American tribes, and other state and non-governmental partners, the Washington State Legislature appropriated $8.568 million in funding for European green crab emergency measures in the 2022 Supplemental Operating Budget, which was signed on March 31. This amount includes pass-through funding for the Lummi Nation, Makah Tribe, and partners.

The Legislature and Governor had previously provided WDFW $783,000 in a one-time proviso in 2020 and $2.3 million in ongoing funding in 2021 to control European green crabs, but the amounts were not sufficient to control growing infestations.

With the emergency order and funding, WDFW has been working with tribes, other state and federal agencies, as well as shellfish growers and private tidelands owners to establish a coordinated response, hire and deploy personnel, and purchase and distribute equipment to areas with known green crab infestations. Three boats, nearly a dozen new employees, and more than 700 specialized traps have been deployed this spring, with more on the way.

Through the efforts of WDFW Aquatic Invasive Species (AIS) staff, the Lummi Nation, Makah Tribe, Shoalwater Bay Tribe, Willapa-Grays Harbor Oyster Growers Association, and other tribes, agencies, and partners, more than 64,000 European green crabs have been removed from Washington waters in 2022 as of June 11.

Under the emergency order, regular updates are posted on this webpage. A European Green Crab Management Updates email list sign-up is also now available at wdfw.wa.gov/about/lists

“Washington’s European green crab management efforts continue to ramp up this year with Governor Inslee issuing a statewide emergency proclamation and the Legislature authorizing new emergency funding resources,” said Pleus, the Incident Commander. “We’re now working to improve strategic coordination so that by working together, Washingtonians can control European green crabs with the goal that this invasive species does not harm our state’s environmental, economic or cultural resources.”

Washington Sea Grant continues conducting early-detection monitoring throughout the Salish Sea and coastal bays, as well as research to better understand European green crabs and their range in Washington state. The Northwest Straits Commission is conducting monitoring and removal efforts in Whatcom and Skagit counties. WDFW provides support for both entities.

WDFW is working closely with the Washington Recreation and Conservation Office (RCO) to establish a Multi-Agency Coordination (MAC) Group under the ICS structure, as well as to implement a new European green crab Emergency Measures Fund Program with $1,100,000 in funding available for interagency contracts to state, tribal, federal, and local governments. In addition, WDFW is implementing a European Green Crab Coastal Management Grant Program to be disbursed by the Pacific and Grays Harbor County conservation districts, with $675,000 in funding available for local, non-profit, or private entities that seek to conduct green crab removal. Permits, traps, and other support are also available for tidelands owners as supplies allow.

A new sign with European green crab identification and reporting information for Washington marinas, boat ramps or beaches is available on WDFW’s website or by request.

Native to western Europe, these shore crabs are typically found in shallow areas, estuaries, and mud flats, and may be present on both public and private tidelands. They arrived on the U.S. West Coast in San Francisco Bay by 1989 and were first detected on the Washington Coast in low numbers in 1998. Detection within the Salish Sea occurred at Sooke Basin, British Columbia in 2012, and then in the San Juan Islands and Padilla Bay in 2016.

European crabs were recently detected in Hood Canal by Washington Sea Grant, and 13 additional crabs were removed from the Seabeck area through rapid response trapping led by WDFW. European green crabs have not been detected in Puget Sound south of Admiralty Inlet.

If a member of the public finds a suspected European green crab or its shell in Washington, they are asked to take a picture and report it as soon as possible. Crab identification guides and an online reporting form are available at wdfw.wa.gov/greencrab.

Reports can also be submitted using the WA Invasives app, or by contacting [email protected]

At this time, WDFW is not asking the public to keep or kill suspected green crabs because they can be mistaken identification of native crabs.

European green crab are classified as a Prohibited Level 1 Invasive Species in Washington, meaning they may not be possessed, introduced on or into a water body or property, or trafficked, without department authorization, a permit, or as otherwise provided by rule.

Beachgoers, anglers, recreational crabbers, and others are asked not to tamper with European green crab traps, which are often deployed in shallow areas exposed at low tide and are typically identified with a bright orange buoy and an official tag or permit.

More information is available at: https://wdfw.wa.gov/species-habitats/invasive/carcinus-maenas