In order not to overwhelm Town residents and visitors, Friday Harbor Town Council decided to wait until fall to install the mini-roundabout on Spring Street. In the meantime, drivers will be adjusting to the new Pocket Park. Drivers will no longer be able to pass vehicles on the right in front of the theater.

"I think the roundabout in the addition to the park at the same time would cause heads to explode," said Town Administrator Duncan Wilson during the council's discussion Thursday, April 6, 2017. 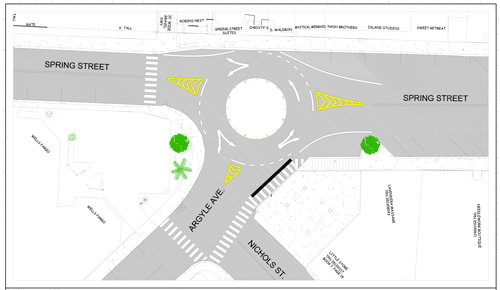 April 2017 version of the proposed roundabout. 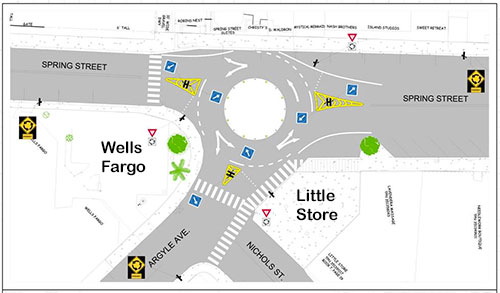 This is an earlier version of the roundabout.

"We moved the crosswalk to the other side of Nichols so it is further away from and probably have less impact on vehicles and greater sight lines for people coming out of the turn to see them, said Wilson.

"We'll have another discussion in August and shoot for a late September, construction and implementation," said Wilson. "And then we'll let the full force of the locals let us know what they think about it. Another thing is while we are still working on some temporary parking solutions for this summer, we've not had any response. If we did this before the summer, we'd lose two parking spaces for the summer."

By moving implementation to the fall "it'll be built at a time when we can probably absorb two spaces being lost and we'll continue on in our long search for the ultimate parking solutions," he said.

Councilmember Steve Hushebeck is concerned about the possibility of traffic backing up as drivers turn left onto Nichols.

Wilson said, "I'm hopeful when we actually watch operations, that there will not be a backup of traffic turning left onto  Nichols because the cars are flowing freely into the roundabout. If that doesn't happen then we go back to the drawing board."

More in this category: « Town not connecting with county's name choice Locational vs historical name chosen for Pocket Park »