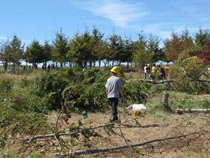 Work is under way at American Camp as the next step in the Cultural Landscape Restoration moves forward. The park will be removing a stand of young Douglas fir that has encroached on Mt. Finlayson and Grandma’s Cove area. There are approximately 300 trees in the stand which will be removed by mechanical methods and chipped on site.

The most significant threat to the integrity of the cultural landscape at American Camp is encroachment of woody vegetation onto prairie land, which is altering the historic relationship between the camp and the natural landscape. The removal of the Douglas fir trees is just one component of the long term Cultural Landscape Restoration Plan. To learn more about the cultural landscape at American Camp, visit:http://www.nps.gov/sajh/parkmgmt/upload/American-Camp-CLI-2004.pdf.

At San Juan Island National Historical Park, small trees and shrubs once confined to hedgerows are beginning to grow in the meadow areas and large rose thickets and Douglas firs are replacing prairie vegetation. In order to retain the open meadow landscape as it appeared during early settlement, it is important to retard colonization by woody vegetation and encourage herbaceous plants.

The overall project involves reducing woody vegetation (Nootka Rose, Douglas Fir, English Hawthorn, snowberry) by mechanical methods. Because of the large area and the extensive yet diffuse nature of the encroachment, a variety of methods will be utilized to maintain the open landscape. Hand pulling, mechanical removal of woody material and prescribed fire are some of the methods.

The area being treated encompasses approximately 250 acres. The majority of the area was farmed in the 20th-century and has a mix of herbaceous plants and colonizing woody hedgerow species, such as elderberry, hawthorn and buckthorn.

More in this category: No leeway on leash law in SJI National Parks »