On June 13, a group of San Juan Islanders met with the Board of San Juan Island Park and Recreation District (Island Rec) seeking to be recognized as an official committee of Island Rec to explore the feasibility of creating a new trail connecting the two camps of San Juan Island National Historical Park – English Camp and American Camp. The Island Rec Board approved and The Old Military Road Trail Committee was born. 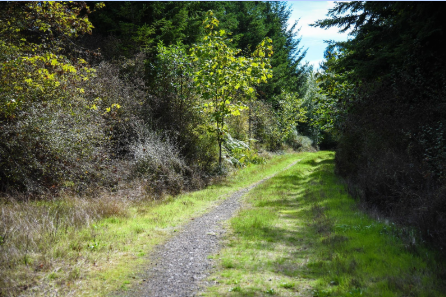 A trail at English Camp near the original Old Military Road)

This Old Military Road Trail would honor the historic road used by Cowichan First Nation peoples, followed by the Hudson Bay Company in the 1850s, and later as a link between posts during the joint military occupation of the island by British and American forces.

While the goal of this project is to follow the historic route when possible, parts of the modern-day trail will likely deviate from the original road for a couple of reasons:

First, over the course of its lifetime, the actual route of the Old Military Road changed a number of times due to various social, political and economic forces. As such there really is no one correct route.

Second, any route across the island will encounter multiple jurisdictions of private and public lands, so there will need to be a range of options for a re-created route of the Old Military Road.

The Committee is working to design a collaborative public planning process and foster solid community participation to develop a range of options across these multiple jurisdictions.

The Committee anticipates a number of benefits to the San Juan Island community from the development and implementation of this trail:

First, it will provide a safe, recreational corridor across San Juan Island for pedestrians, bicycles and possibly equestrian use on some sections, expanding access to outdoor recreation and promoting healthy lifestyles and improved safety for walkers, cyclists, hikers, and joggers by providing an off-road route across San Juan Island.

It will engage our youth by providing a novel connection to the natural world. It will provide a new venue for educational field trips, community recreational events, and stewardship sites for the local youth conservation corps.

This endeavor will continue to support the current cooperation between local land conservation groups who already work in a coordinated fashion to protect wildlife habitat, to reestablish native flora, to eradicate invasive species, to preserve natural wetlands, and to conserve the natural beauty and unique character of the Island.

This “backbone” trail will complement the main goal of the San Juan Island Trails plan of 2006, developed with technical assistance from the National Park Service: to create a network of interconnected trails to major destinations on San Juan Island.

The first order of business is to apply for a grant from the Rivers, Trails and Conservation Assistance (RTCA) Program of the National Park Service for technical assistance in 2020 to aid with development of a feasibility study and strategic plan to develop a realistic route for this 12- to 17-mile, multi-use trail.

If accepted, the RTCA Program will help to foster solid community participation and to cement support for the resultant strategic plan from partner agencies, local businesses, and individuals.

The strategic plan will set forth the first phase of major steps to gain resources, construct, and open a segment of the new trail by 2022 in time to celebrate the 150th anniversary of Kaiser Wilhelm I's famous arbitration decision granting San Juan Island to the United States.