New signs at American and English Camps, installed to remind National Park visitors of the dog leash laws, are stirring up controversy. National Historical Park Superintendent Peter Dederich says nothing has changed regarding enforcement of the law requiring all dogs to be on leashes no longer than six-feet. 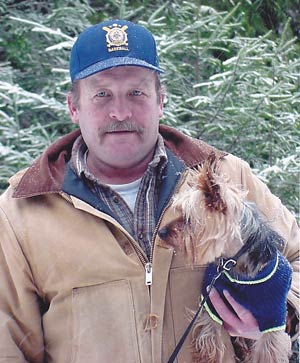 Ask Karl Mueller, who faces a hearing in federal court in Bellingham after an incident at the Redoubt in American Camp this month, and you'll hear a different story.

Mueller regularly walks his three dogs: Tilly, a 14 1/2-pound 8-year-old Australian terrier; Spanky, an 8 1/2-pound silky terrier and Buster, a 12 1-2-pound 13-year-old Yorkshire terrier on the gravel road at the Redoubt at American Camp. He has two on leashes and Buster - "he's a tugger" - without a leash.

He was stopped by a Park Ranger and told he was in violation of the leash law. Mueller said the Ranger launched into an explanation of the law noting all 400 National Parks have the same leash laws. Mueller responded he didn't need a history lesson and said, "Guess what you won't be seeing me in your park again. You just ruined my day."

According to Mueller, he picked up Buster and headed back to his car. The Ranger followed about 20 yards behind in his park vehicle. Mueller stopped and asked him if he needed something or if he wanted to go around him.

When the Ranger was 15 feet from Mueller's car, Mueller said, he jumped out of his vehicle. With his right hand on his holstered gun, he shouted, "Freeze, do not move."

The situation quickly deteriorated. Mueller wanted to place the dogs in his vehicle, but was refused permission. He asked if he set Buster down to get his identification out of his pocket would it mean he'd receive two leash violation tickets instead of one.

When recounting the incident, Mueller readily admits he mocked the ranger. "I thought I was in America when I woke up in the morning," he said.

Sheriff Rob Nou arrived on scene and let Mueller place his dogs in the car. Nou could only observe since it was a federal jurisdiction.

The Ranger wrote the ticket. Then asked Mueller to sign it and give his social security number.

Mueller is a Vietnam War Veteran and was the Commander of the Hackett Larson Post 163 American Legion in Friday Harbor for seven years. "Being in the military I know you already have my social security number on your screen (in your park service vehicle)," he told the Ranger.

The Ranger flipped the ticket over and read a regulation from 1996. Mueller then rapidly rattled off his social security number like they did in the military.

At that point, according to Mueller, the Ranger said, "That's it, turn around." Mueller had to empty his pockets, take off his shoes, be handcuffed and walk barefoot across the gravel to the ranger's vehicle.

He was placed inside the backseat on the driver's side. The front seat was pushed back all the way leaving very little room for the 6' 1" prisoner.

Mueller said he was then ordered to slide over. "I swore at him and told him, I thought this vehicle had four doors and I told him he'd have to kick me if he wanted me to move because that is the only way I could move."

Mueller said the Sheriff intervened and suggested the handcuffs be loosened and he be moved around by getting out the door and in the other door.

Mueller was taken to holding cell at the sheriff's office and his wife bailed him out 2 1/2 hours later.

He received three tickets. One for violating the leash law, one for interfering with a federal officer and another for interference. He must appear in federal court for the interference tickets. 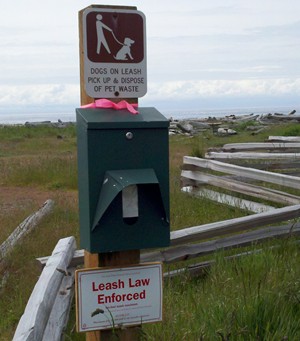 Dederich did not want to comment on the incident since it is going to court. He did say the ticket "for interfering with an officer was issued because Mueller didn't follow the ranger's direction to stop, sit down and process the ticket."

Dederich did stress that receiving a ticket for violating the leash law does not result in a court appearance. It is similiar to a traffic ticket. The fine is dependent on the situation. The maximum is $5,000 and six months in jail.

As for walking dogs in the National Park. They must be on a leash. It can not be more than six-feet long. These are not new rules.

Those rules are the same for all 400 parks in the National Park System. It is up to the discretion of the local park superintendent whether dogs are allowed beyond the parking lots. In the San Juan Island National Historical Parks, dogs have been allowed to go into all areas of the parks. In many National Parks, dogs are limited to parking lots only.

Dederich reminds people the rules are there to protect the wildlife and visitors to the parks. 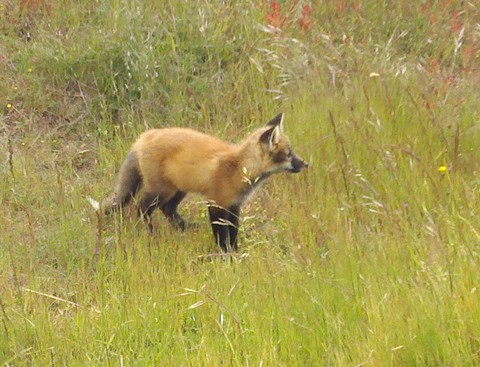 More in this category: « UW students/faculty to design new visitor center for American Camp Share your stories about Your Park »