My Last Days, an uplifting documentary series about courageous people facing one of life’s most difficult challenges, a terminal illness, will premiere as a three-night special event, Wednesday, August 17, Thursday, August 18, and Friday, August 19, 2016 (9 to 10 pm ET/PT), on The CW. 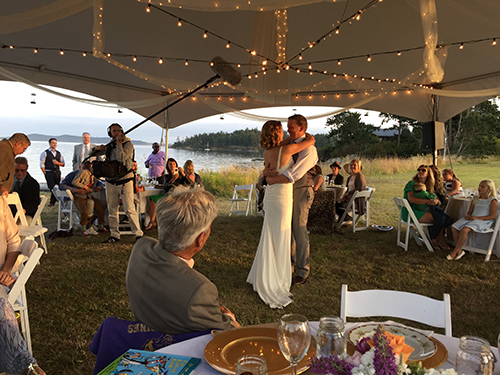 Jessica and Dan at their wedding. Photo courtesy of Jessica Oldwyn

The series, created and hosted by Jane the Virgin star Justin Baldoni,  features the compelling stories of six people who remind viewers that having a limited amount of time doesn’t mean you can’t make a positive impact on the world. One of the six people is Jessica Oldwyn, of San Juan Island.

In an email to SanJuanIslander.com, she wrote:

I was contacted through my blog jessicaoldwyn.blogspot.com by Wayfarer Entertainment. They were producing “a documentary series about courageous people facing one of life’s most difficult challenges, a terminal illness,” and my story resonated with them.

As a brain tumor blogger, I have shared my story in the hopes that I can be a resource, and advocate for patients and caregivers. The day I was diagnosed, my husband proposed, but after a cancer diagnosis, the planning, organization, and mostly the finances, a wedding was too overwhelming. So, when Wayfarer offered to help me surprise my husband with an official wedding, I couldn't turn it down.

Wayfarer entertainment reached out to the San Juan Island community to throw a last minute surprise wedding. I would especially like to thank these donors who made it possible: Vinny’s Ristorante, Archipelago Trio, Flagship Rentals, Susie Wampler, Archie Brooks, Daniel VanHamerseld, Libbey & Nigel Oswald. For anyone who I accidentally omitted, I apologize, and am deeply grateful for your contribution!

Even though the production company got the ball rolling, the efforts of my community is what made this wedding happen. I am humbled, and grateful every day that I was able to be raised in such a loving island family.

"My Last Days, is an inspirational look at what happens when we detach from the material things of the world, and live fully in the moment,” said Baldoni. “I’m proud to share these stories that remind people that each and every one of us has the power to choose happiness and to make a difference — regardless of the hand we’ve been dealt.”

The inspiring people featured in My Last Days include:

Claire Wineland, from Venice Beach, Calif., a 19-year-old with cystic fibrosis, who founded Claire’s Place Foundation, Inc., a non-profit providing support to the children and families affected by cystic fibrosis. Already a best-selling author and a TEDx speaker, Claire is a model of inspiration for others who live with the disease.

“Darth Vader,” of Canandaigua, N.Y., who has been battling leukemia for the last 14 years and has still managed to complete more than 50 Tough Mudder competitions, as well as 37 half-marathons. With 13 surgeries as part of his history, Darth wants only to be defined by his hard work, sacrifice and adaptability.

Kat Lazo, a 25-year-old self-described “proud lesbian” from Las Vegas, Nev., who loves traveling, Beyoncè, and most of all, delicious food. But Kat has a form of stomach cancer that keeps her from enjoying her favorite foods. Through her determination to live life colorfully despite a few setbacks, she consistently inspires people with her vibrant personality and zest for life.

Isabel Bueso, of Concord, Calif., an aspiring sociologist and a romantic at heart, loves everything from dancing to traveling. Born with a very rare medical condition named Mucopolysaccharidosis VI (MPS VI), Isabel was raised knowing she would not live past twenty. Isabel, now 21, continues to research MPS VI, and regularly organizes events to build awareness.

Lifelong gospel music fan Kendrick David Evans, 25, from Tallahassee, Fla., who started singing publicly at age eight, and by age nine had created his own gospel group. In 2012, Kendrick was diagnosed with a rare form of sleep apnea and has been given approximately three more years to live. But Kendrick won’t give up before he completes his fourth album and puts on a huge gospel concert with some of his favorite artists.

Thirty-five year-old Jess Oldwyn, from Friday Harbor, Wash., who has been diagnosed with brain cancer, and has had three brain surgeries that have at times left her unable to speak and unable to move her right side. Jess’s love for her husband and her determination to find a treatment that will work keeps her going.

Extended episodes of My Last Days, will be available on The CW’s new digital vertical dedicated to giving back, CWGOOD. CWGOOD highlights the causes that CW stars and fans care about, with content that will both entertain and inspire. CWGOOD will launch in August in conjunction with the premiere of MY LAST DAYS on The CW Network. CWGOOD content has been created in partnership with Wayfarer Entertainment.

My Last Days, was created and directed by Justin Baldoni and produced by Wayfarer Entertainment, in association with SoulPancake, with executive producers Justin Baldoni, Rainn Wilson, Ahmed Musiol, Farhoud Meybodi and Sam Baldoni.

Link to a GO FUND ME site for Jessica