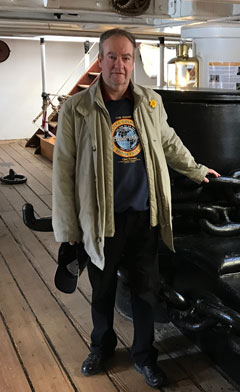 Mike Upton was a great friend of San Juan Island National Historical Park during his tenure as consul during the late 1990s, the highlight being his arranging for the British government in 1998 to purchase the magnificent fiberglass flagpole on the English Camp parade ground. He was also instrumental in helping to organize the establishment of the park's first Encampment event as a result of the dedication ceremony of the pole, which was attended by more than 600 people in August 1998.

Encampment has since become an annual event attended by thousands, with the peak coming in 2009 when 5,000 trooped through English Camp to celebrate the sesquicentennial of the Pig War. Mike also arranged to have the British Army's Queen's Own Scottish Borderers Pipe Band visit the island in 1998 giving two performances at the community theater and memorably marching from the ferry landing up Spring Street on arrival. Even after his tenure in Seattle was complete, he influenced British contributions to the park through successors and key contacts in Seattle.

This is largely because Mike believed in the primary mission of the park: that individuals and nations can sometimes resolve their differences peaceably without resorting to violence. As a career British diplomat he lived by and was dedicated to this idea throughout his career.

He retired in recent years to his home in Wokingham, where he lived with his wife Susan, who was also a part of that flagpole dedication in 1998 when after failing to break a bottle of Madeira on the pole, she uncorked it and poured it around the base. (Mike's name is on the commemorative plaque mounted on the pole.)

Mike leaves Susan, a daughter Kate of Toronto, Canada; a son Richard, an officer in the Royal Air Force currently stationed on Cyprus; a daughter-in-Emma; and granddaughters Penelope and Beatrice.

He was a great personal friend of mine, I'm honored to say, who made a difference in this world and will be missed.

More in this category: « Perham Black takes 13th place in the nation at Cressy Cup Katie Loring is the next San Juan County Superior Court Judge »