It’s the second week of May. Temperatures are climbing. Poppies are popping on the westside of San Juan Island. A rising tide of tourists is flowing onto the islands sidewalks, streets and roads. Baseball boosters will be hanging another league championship plaque on the Hartman Field’s backstop, Friday Harbor High School’s home field. 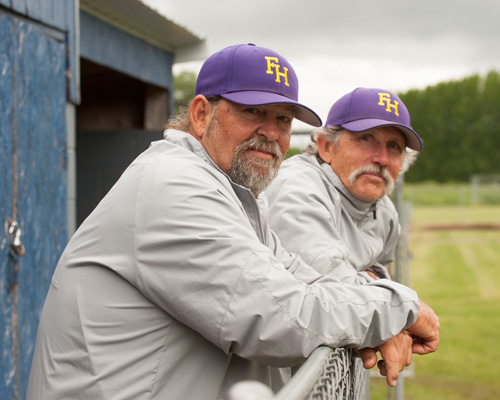 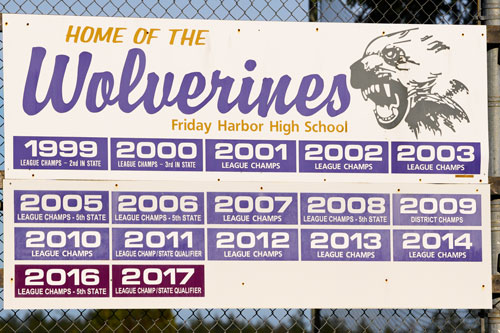 Friday Harbor’s sluggers won all nine of their Northwest 2B/1B League contests on the way to earning the 18th conference championship since head coach Rich Warin and assistant Steve Schramm began directing Wolverine baseball in 1996. Over that 24-year span Friday Harbor’s teams posted more than 250 victories while recording winning seasons in all but a couple years. The Wolverines also missed the playoffs just as few times. They advanced to the state tournament 12 times. Four seasons the Wolverines tied for fifth. In 1999 they finished the Class A runnerup after a bizarre ending in the championship game. The next year they placed third among even stronger competition and came one run shy of playing in the title game.

Randy Sweeney, Concrete High School’s head coach, knows too well how competitive the Wolverines have been during his 20 years of coaching the Lions. “It’s always been tough,” Sweeney said. “It seems like we’re always shooting for Friday Harbor.”

Though he would have preferred winning more games against the Wolverines, the Concrete coach appreciated Warin and Schramm’s approach to the game. “They are always well-prepared,” Sweeney said. “Rich and Bones (Schramm) are a great couple of guys.”

Sweeney knew Warin when he played softball against him and Schramm in games against Friday Harbor Mudsharks. That experience prevented the Lions’ coach from discounting the hippy head coach in the other dugout. (When off the diamond Warin often sports a Hawaiian shirt and shorts and some contend resembles “The Dude” from the cult-classic film “The Big Lebowski.”)

“He was a heck of a ballplayer,” Sweeney recalled of competing against Warin and the highly-regarded Mudsharks in the 1980s. “Rich was always a fiery competitor.”

Warin still exhibits that competitive spirit after nearly a quarter-century of coaching high school ball. In a recent game, with arms spread wide, he argued for his baseman after a baserunner clearly went out of the base path to avoid a tag.

“Rich is as intense as the day he started coaching,” Sweeney said.

Just as consistently Warin deflects credit to Schramm and his players for the program’s success.

“A key to our success has been the dedicated players that believed in making our program the best it could be, one that they all could be proud of having been part of,” he said.

Warin collaborates considerably with Schramm. “I was lucky enough to have been able to team up with such a baseball savvy coach as Steve is,” Warin said.

“Rich and Steve work so well together. Their personalities just mix,” said Fletcher Vynne, a 2002 FHHS grad who advanced to the College World Series while attending the University of British Columbia. “The strength of one covers for the weakness of the other.”

Vynne, who went on to fly fighter jets for the Navy, appreciated his former coaches’ ability to communicate. “They could both be sending the same message but communicated in their own unique way.” 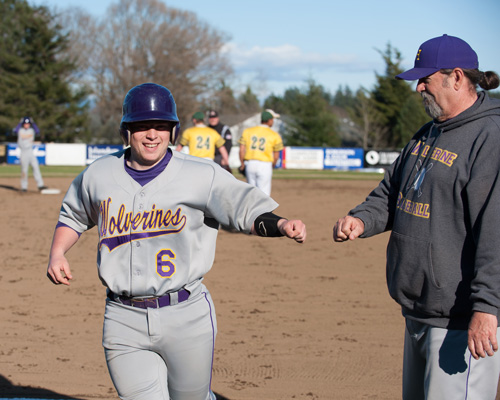 Schramm credited Warin with setting up a winning “protocol” early in their coaching tenure. “It’s a nice blend of having fun, joking around, and being serious at the same time,” he said. “It was a continuation of that approach we had playing softball.”

Players from some of the program’s best years agreed Schramm’s and Warin’s “old-school” approach to baseball works.

“They had a really good understanding of how to play the game,” said Jordan Ross, a 2000 FHHS graduate, who continued playing at Marshalltown Community College in Iowa.

“They’re coaches that care,” said Justin Nibler, a 1999 FHHS grad who is back on the field as an assistant. “They’re dedicated, experienced ballplayers and they love the game.”

Their coaches also were adept at inspiring their players to give their most. “We always had the hardest working team,” Jordan Ross said.

While coaching two years at Seattle University’s fledgling Division I program, Vynne gained an appreciation for his coaches’ ability to teach the game without preaching. “They let us figure it out at times,” he said.

Jacob Ross, a 2002 FHHS grad who played at University of the Pacific, recalls Warin as “really humble,” a coach who allowed the players to contribute to strategy. “Rich was really inclusive,” he added. 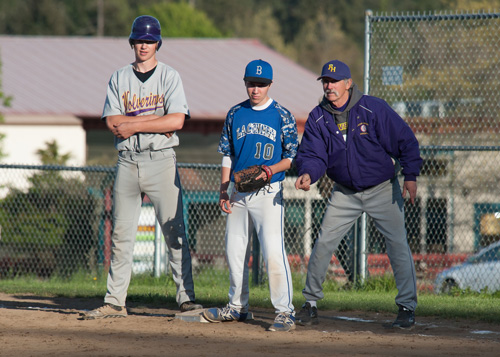 Former players credit Schramm and Warin with teaching them much more than hitting, pitching and fielding.

“Of all the coaches I had they were the ones I respected the most,” Jordan Ross said. “They knew the game of baseball but also taught us how to have fun.”

“Steve and Rich made it a lot of fun,” said Peter Shanks, a 2005 FHHS grad who played for George Fox University,

“I had the most fun playing baseball when I played for them,” Jordan Ross said.

“Rich brought so much joy to the game…It was always fun to play at Friday Harbor,” said Jacob Ross.

“There was a time to have fun and a time to be serious,” Shanks said. “As a player we knew where that line was.”

“We have fun when fun can be had and we’re serious when we need to be,” Nibler said. “It’s still the same program.”

Shanks fondly recalled his Friday Harbor baseball games being “a community event” with the third baseline “Dirty Birds” chowing on peanuts and rooting on the Wolverines.

“The community is lucky to have Rich and Steve there,” Shanks said. “Springtime was a fun event for most people.”

Likewise the veteran Wolverine coaches appreciate their boosters. “We’ve probably the most loyal fan base in the state,” Warin said.

More in this category: « After 18K rides, Roundtowner turned over a Leaf C J Woods will be Camp Eagle Rock director »