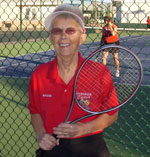 Margaret Ann “Maggie” King, 84 years young, died amongst her friends, family and caregivers at Hearthstone Adult Care Home at 5:15 PM on Friday, January 17, 2014, after a long battle with dementia and the physical deterioration from multiple strokes and seizures.

She was born on March 31, 1929 in Friday Harbor, WA to Louise Karen Lovaas King and Carleton Wright King. Her partner, Bette Story, was at her bedside when she passed.

To earn money for college Maggie worked in Friday Harbor at her grandfather’s grocery store, King’s Market and for her father at King’s Slaughter House where she was the chief gutter. She also worked at the Fish Cannery.

She retired in 1985 from Mountlake Terrace High School in Edmonds, where she taught and coached for 24 of her 26 years of teaching.

While teaching at Mountlake Terrace High School, Maggie had highly successful coaching seasons in volleyball, basketball, tennis, and track. She also participated on organized sport teams in basketball, and softball and was an avid runner, tennis player, and swimmer. She was recognized for her fierce fight for equality for girls’ sports in Snohomish County and throughout the Pacific Northwest. In 1980 she was awarded the Seattle Times “Woman of the Year Award” in recognition for her contributions to women’s sports. In 2002 she was inducted into the Mountlake Terrace Hall of Fame.

The family will have a celebration of life event for family and friends at a later date. Memorials may be made to Hospice of the Northwest, 819 S. 13th Street, Mount Vernon, WA 98274, or the Animal Protection Society of Friday Harbor, 111 Shelter Rd., Friday Harbor, WA 98250.