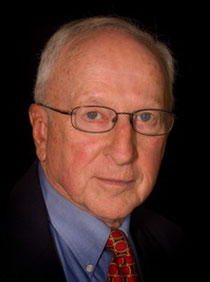 Dr. John Hugh Aberle, born in Jenkintown, PA on February 27, 1928, passed away August 17, 2011 at the age of 83. He is survived by his wife of 55 years, Joann, his son Mark, daughter Maren, grandchildren Devin and Kylie and brother Richard Aberle.

John lived a fulfilling retirement at home on San Juan Island where he inspired all those around him with his love for boating, the islands, and his delightful sense of humor.

For 40 years John served as an Orthopaedic surgeon at the Seattle Orthopaedic and Fracture Clinic. He was a member of the American Academy of Orthopaedic Surgeons, President of the Puget Sound Chapter of Western Orthopaedic Association and President of Seattle Surgical Society. He served many years as an attending physician at Children's Orthopaedic Hospital and clinical professor at the University of Washington.

He attended Penn Charter School in Philadelphia, was in the US Naval Aviation Cadet Program, attended University of Virginia, graduated Temple Medical School,and did his residency at the University of Washington.

John was an avid sailor, pilot, skier, craftsman and watercolorist. He was a loving and tender husband, father and grandfather and cherished friend to many. Please visit John's Memorial Website.

Arrangements are in the care of Evans FuneralChapel and Crematory, Inc., Anacortes, WA and the San Juan Islands.