David Merle Stier passed away gently on August 27, 2011 at home, surrounded by his family in Santa Cruz county California, due to complications from smoking. Dave was born on Mayday 1940 in Hartford and grew up in Cleveland OH and Bellevue, WA attending the Cleveland New School and Bellevue High('58) and graduating U of W with a degree in Psychology. 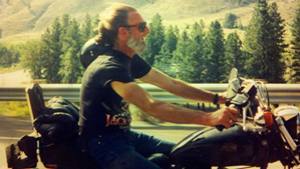 Dave had a fascinating work history as an executive for the Ford Motor Company; tavern owner, urchin dive boat captain and finally as the "friendly face on the dock" for the Port of Friday Harbor.

David was an avid and lifelong biker, a real "iron butt" with many rides to Sturgis, Daytona and even New Zealand on his bagger.

He was also a successful and competitive sailboat racer on Puget Sound in the 70's and 80's, winning many events. He leaves behind his first wife Sheila Clark of Spokane, sons Donald Robert Stier and Wayne Bradley Stier, daughter in law Doreen Stier and six grandchildren A small private family gathering will take place in California, the family wishes to thank Hospice Santa Cruz for their incredible skills and compassion. You will be missed...