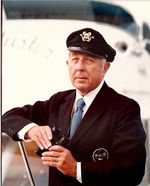 Bill was born in Seattle. His parents were Edward Lee and Lucy Brant, early northwest pioneers. Bill attended Lincoln High School and the University of Washington School of Architecture. He married Beverley Dorr in Tacoma in 1938.

With World War II approaching, he did tool design work at Boeing, later moving to Santa Monica where he became involved in the first Atomic bomb project. After the war he did store design work while studying photography.

In 1949 Bill and Beverley opened the Brant Photographers, Inc. in the Bellevue Square. They operated their studio for over 30 years until retiring to San Juan Island. His photographic work consisted of portrait, commercial, aerial, magazine, text book and over 2000 wedding assignments.

In the early 1950s Bill became fascinated with British sports cars and raced his MGTD and later a Jaguar XK 120 when not busy photographing races for Road and Track magazine.

Many wonderful trips were made north on the Starduster and later the cutter Tangerine.

Six years were spent as a Port Commissioner and recently four years on the Marine Resources Committee. Bill's love for the islands was so strong he felt he must have salt water in his veins.

Interment will be in the San Juan Valley Cemetery. Arrangements are in the care of Evans Funeral Chapel and Crematory, Inc., Anacortes, WA.