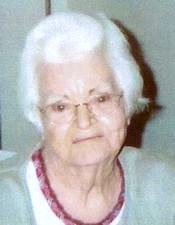 Marjorie Grace [Langdon] Gradl, 97, went home to be with the Lord July 5, 2011. Formerly a long-time resident of Lopez Island, Washington, she resided in later years at her daughter's home in Seabeck until her passing. She was born to Ralph and Emma [Culton] Langdon at Clarkston, Washington November 17, 1913, and was the third of six children.

She and Max Milton Gradl were married in 1941 and resided in Aberdeen until the couple moved to Lopez Island in 1967. Marjorie was a homemaker and avid gardener, and was affiliated with the Enchanted Quilters club. She was an active member of the Lopez Island Community Church, but while residing at Seabeck, attended Sylvan Way Baptist Church in Bremerton.

Marjorie's husband Max, three brothers Raymond, Gale, and Morris, and two sisters, Maxine McMahone and Lila Zuber preceded her in death. She is survived by daughters and sons-in-law, Judy and Richard White of Seabeck, Myra and Charles Rockwell of Aberdeen, Cheryl and Dan Kilpatrick of Anacortes; nine grandchildren; 16 great-grandchildren; and 4 great, great-grandchildren. A memorial service will be held at 2:00 p.m., Thursday, July 21, 2011 at Sylvan Way Baptist Church, 900 Sylvan Way, Bremerton, WA. In lieu of flowers, contributions may be made to Hospice of Kitsap County Hospice at P.O. Box 3416, Silverdale, WA 98383. Please sign on-line guestbook www.tuellmckeebremerton.com. Arrangements by Tuell-McKee of Bremerton, 360-377-5179.