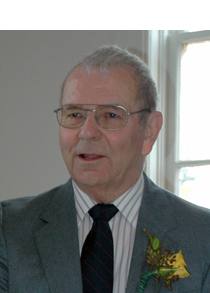 Hubert James (Jim) Cahail passed away at Life Care Center in Friday Harbor on December 23, 2011 from an aggressive form of lung cancer.

Jim was born on January 4, 1934 in Friday Harbor to Hubert and Frances (Mickey) Cahail. He lived his entire life on San Juan Island. He is a descendent of Dan Madden and as such, a third-generation islander. He spent several years fishing on the Denny M around the islands.

Jim graduated from Friday Harbor High School in 1952 and attended Washington State University where he studied engineering. While there, he met Mary Jean Thomsen and the two were married on April 7, 1956 in Wenatchee, WA. They returned to the island and there raised three children – Doug, Peggy and David.

He worked as civil (county road) engineer for San Juan County for 12 years beginning in 1956. In 1969, he joined OPALCO as an engineer and retired as the Assistant General Manager in 1999. He also worked over the years for the Corps of Engineers and worked on a bridge to connect the islands.

Jim also served the Friday Harbor community for many years. He was initially elected to Town of Friday Harbor – City Council in 1963 and periodically over the next 3 decades served as city councilman or mayor. He often was greeted by people calling him "Mr. Mayor".

In the early 1990s, he and Mary Jean built a log vacation home north of Leavenworth where they spent several weeks during the year including many snowy Christmas’ with his family.

He enjoyed spending time with his family and dogs, traveling around the Pacific Northwest and Europe, gardening and golfing. He also had a strong interest in Northwest railroads and lighthouses. He volunteered for many years with the San Juan Historical Society mowing lawns, doing research, and performing odd jobs.

Jim, like his mother, was a lifelong member of St. Francis Catholic Parish and volunteered in various functions. Jim is survived by wife Mary Jean, son Doug (Carla), daughter Peggy (John Negley), son David (Paul), and grandson Ian. Jim was a devoted family member and supporter of the community and will be sorely missed.

A mass will be conducted at noon Wednesday, December 28th, 2011 at St. Francis Catholic Church (425 Price Street). A reception from 1 to 3 p.m. at the Presbyterian Church (425 Spring Street) will follow.

Please make donations to the San Juan Historical Society in support of the Milk Barn restoration and much needed walking paths.