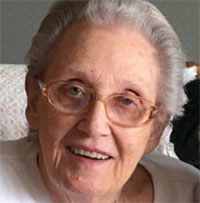 Marjorie Briney was born November 21, 1933 in Tacoma, Washington to Baltz (Joseph) and Elizabeth Kennel. She graduated from Lincoln High School in Tacoma; there she met the love of her life, James (Jack) Briney, They married December 29, 1950. Jack served in the US Marine Corps so their early life included duty assignments in several west coast cities and Jack’s deployments in the Philippines. The couple was blessed with daughter Patricia in 1951 and son Michael in 1952.

Marjorie and Jack made West Linn, Oregon their permanent home when Jack retired from the Marine Corps in 1966. Marjorie continued her life as a mother, wife and home maker. Once the couple became empty nesters, they developed a five-acre homestead in the Highlands Oregon area, complete with chickens, rabbits, pets and a large vegetable garden.

Jack passed much too young in 1985. Marjorie decided to move back to her roots in Tacoma to be near her mother and her sister. Marjorie developed community in Tacoma and was loved by many close friends and church members. As Marjorie’s health declined, she decided to move closer to her daughter Patricia in Friday Harbor, Washington. Island life had its ups and downs but being close to her loving daughter made Marjorie happy.

Marjorie passed on February 11, 2022 due to complications from a fall. She died at home, as she wished, surrounded by her loving family. She was anxious to unite in heaven with Jesus and her husband Jack. She will be remembered for her strong will, her sense of humor and her strong faith. She is survived by her children Patricia McKay (Mike), Michael ‘Mike’ Briney (Jill), sister Donna Reinke, four grandchildren and nine great-grandchildren. At her request there will be no memorial service.

To share memories of Marjorie, please sign the online guestbook and bookmark this link for return visits: www.evanschapel.com/obituary/marjorie-briney