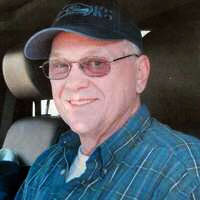 On the evening of July 3rd, Michael “Mike” Wiley of Orcas Island, WA died peacefully at home, overlooking his yard and with his dog by his side.

Mike was born to T. Wayne and Esther V Wiley in Kingsburg CA where he graduated from high school. He married Gayle, and together they raised 3 children: Michele, Timothy and Anthony. In 1981, he moved to Orcas Island WA. Here he later met and married Carolyn, and they enjoyed years together until her passing in 2008.

He enjoyed his work as a painting contractor, creating things with woodturning, welding and loved riding his motorcycles. He always had a project to work on, but also had a good book (or 2) he would retreat to. Although people often referred to him as kind and gentle, his ability to also be intensely focused with an excellent work ethic was apparent in everything he touched.

He would say that his best friend(s) and longtime customers were like family and he talked to them regularly. He loved his chatty phone conversations!

A public memorial service/celebration of life will be held at a future date to be announced.