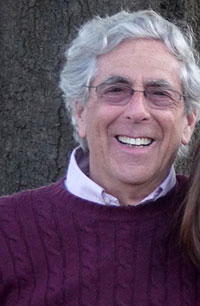 Richard Fadem, who retired to Orcas Island after a distinguished career as an English literature professor only to resume teaching literature seminars that enriched and inspired the lives of dozens, if not hundreds, of Orcas, San Juan and Shaw islanders over the next decade-plus, died May 17 at his home outside Santa Fe, NM.

He died from complications of multiple myeloma. He was 82.

Richard moved full-time to Orcas after a career as a 19th century English literature professor at Scripps College and the Claremont Graduate School in California. Prior to that, he and his family had spent summer vacations on Orcas.

Having not lost his love of teaching, Richard resumed teaching literature seminars, first through Skagit College, then freelance, on Orcas, San Juan and Shaw Islands. Each class ran for six or sever weeks, about four hours one day each week, and ran the gamut of literature. While his specialty was Romantic and Victorian English literature, his classes also ranged to Russian, French, German, American and South African novelists and poets.

As time passed, he dropped his seminars on San Juan and then Orcas, but continued on Shaw for 17 years, until 2017. The classes, at the Shaw community center, always had 12 to 16 participants and were free of charge. The age range in one class was 90 to 15, and the life experiences, reading histories and freely-shared opinions were both informed and sometimes radically digressive. Yet Richard had a way of honoring all contributions without losing the class’s way.

Keith Gerrard, who graduated from both Harvard and its law school and was a regular at Richard’s Shaw seminars, said Richard was “far and away the best teacher I ever had.” Others described Richard as “erudite” and “elegant” and quite funny.

Richard was born Sept. 26,1939, in Newark New Jersey, but his parents then lived in Manhattan. When he was school age, his parents sent him to board at the Lawrenceville School in New Jersey. From there, he returned to New York to Columbia College for his bachelor’s degree and to Columbia University for his Ph.D. After receiving his Ph.D., he joined the Scripps College faculty (where he also became the Dean of Faculty and the college’s Acting President). It was there he married a former student and fathered two children, Luke and Anna.

“We had a television in the house, but couldn’t watch it,” recalled Luke. “We got to watch one video movie each week and dad would read to us every night, often Kipling or Dickens or another Victorian writer.”

“He was deeply intellectual and raised us to be independent. (And) he and I spent a lot of time cycling together,” Luke added. Luke is a former prosecutor, including prosecuting war crimes on behalf of the United Nations, and now is a professor the University of California/Davis Law School.

Richard’s writing also took a creative turn, recalled his daughter, Anna Fadem, a psychotherapist in San Diego. When Anna was a child, her father wrote her letters from an Antarctic penguin, Packy.

“He would put the letters in the freezer before they were delivered to me, so they would be cold to lend them authenticity, “ she said. “Packy and I wrote back and forth for years, and I swore to my elementary-school friends he was real and I was going to visit him in Antarctica. One evening over dinner dad tentatively broke it to me that Packy wasn’t real, but fortunately by then I had figured it out.”

Also surviving is a second daughter, Clara Merrill, from a later relationship. Clara recently graduated from Haverford College and will begin a nursing program at Villanova University.

In addition to his Claremont teaching, he was on the board of the Sir Francis Bacon Foundation, affiliated with the Huntington Library in Los Angeles, for many years. Several Orcas institutions received grants from the foundation during Richard’s time on Orcas.

Richard loved teaching so much that he had a hard time with the isolation needed to write books. While a graduate student in the 1960s, he began one on the poet William Wordsworth, whose work ushered in the Romantic period of English literature, while a graduate student in the 1960s. Richard could — and did — quote Wordsworth at length, and when asked what he’d been up to his answer often was “finishing” his Wordsworth book.

He finished it shortly before his death.