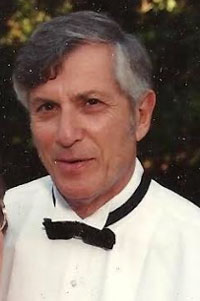 James John Asher, the son of James and Antoinette Abdo Asher, passed away at his residence in Los Gatos, California on February 19, 2022. He was 92.

Jim was born on August 10, 1929 in Detroit, Michigan. He graduated from Visitation Catholic High School in Detroit. He went on to receive his Bachelor’s degree at University Of New Mexico in 1951, and his Masters degree in Arts from University of Houston in 1955. He also holds Doctorate degrees in Philosophy which he achieved in 1957 from University Of Houston and after that achieved a Doctorate degree in psychology.

Following his Military Service in the Korean war from 1951 to 1954, he completed a course in Arabic at Fort Ord Defense Institute for Language in Monterey,California. From 1956 to 1957 he was an instructor at the University of Houston in the Psychology department.

In 1957 he began his professorship at San Jose State College in San Jose, California where he taught statistics and Psychology. He was the associate dean at San Jose State in the school of social studies from 1976-1978 until his retirement from teaching in 1990.

Dr. Asher also taught at Stanford University, Univ of California at Berkley, The University of Cambridge in the U.K. , University of Santa Barbara and The United States Army’s Defense Language Institute in Monterey California. Dr. Asher was also a consultant for IBM thru the years.

Dr. Asher achieved prominence for his innovative method of learning a second language. He founded TPR (Total Physical Response) in the early 60s. The basic premise of TPR is to coordinate language with physical movement. Dr. Asher developed this pioneering approach to teaching language by observing how young children first learn how to express themselves. As a young child, he was often cared for by his Arabic grandmother, who didn’t speak English. The need to respond to her commands contributed further to his understanding of how a second language develops. Of his three siblings, he was the only one able to communicate in Arabic.

As the TPR method gained momentum in educational settings worldwide, Dr. Asher was frequently asked to lecture at colleges and universities in the U.S. and abroad. His many accomplishments in this field earned him a place in Who’s Who in America. Dr. Asher was also a prolific writer, publishing 100s of books and articles in his lifetime.

Just prior to his passing he developed a new method of learning Algebra that broke the mold on traditional thinking. This method was circulated to prominent mathematicians around the world who could not prove it wrong.

Dr. Asher was an entertaining storyteller with a delightful sense of humor. He was inquisitive, always interested in learning about and celebrating others. Dr. Asher never shut down and had a pad of lined paper next to his bed and nightly would get up and spend hours writing down ideas which would keep him up nights on end.

Dinners at the Asher home, a frequent gathering place for relatives and friends, was always an occasion for laughter as he regaled everyone with his hilarious renditions of events. He is lovingly remembered by his wife of 70 years, Virginia Lee Gardner, his children Jeffrey Asher and Melissa Smith, his four grandchildren Russell, Sam, Katelin, and Morgan, his sisters Leatrice Asher and Jacqueline Asher, and a multitude of nieces and nephews who always looked up to him. He is preceded in death by his sister, Claudette Asher. He will be greatly missed by all who benefited from his outstanding work as a professor, writer, and lecturer, especially for his ability to inspire and motivate all he met.

A private Memorial Service for family and friends will be held June 7th at 2:30 pm.

Dr. Asher was always sympathetic to people who were struggling and would stop to give to people in need.

Dr. Asher had a long list of charitable organizations he wanted to give back to but at the top of the list are those that address the issue of hunger. The family asks that any offerings be directed to: