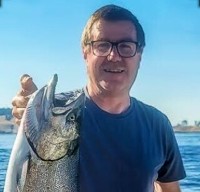 The world lost a wonderful man, a fisherman and brilliant technology "geek", a loving husband, father, son, brother, uncle and friend. Mike lived his life, especially his last 11 months of retirement, to the fullest.

On the evening of July 29th, while fishing on his beloved boat Nor’Westy, he suffered a heart attack at age 53.

Michael Dennis Westover was born March 25, 1969 to Dennis and Pat Westover of Bellevue. He is survived by his parents, wife Michelle, son Oswald, sister Alex (Steve), and brothers, Erik (Alethea) and Steve (Fiona) and numerous nieces and nephews.

Mike was always into technology. He was the first on the block to have a Commodore 64 computer and solve Rubik’s cube in grade school. He was also an avid athlete participating in cross country running and bicycle racing in high school and recently completed a bike trip thru Portugal with Michelle. Highly educated, he attended Holy Family School in Kirkland, Eastside Catholic in Bellevue and the University of Washington. He went on to receive his MBA at Boston College Carroll School of Management where he met his wife, Michelle. They married in 1998 in Boston, MA. Soon after their child was born, they relocated back to the Pacific Northwest.

Mike’s career has been technology based from the start. Focusing on the insurance industry, Mike had a long career at Liberty Mutual, quickly moving to roles in the international division and later director of applications. His entrepreneurial spirit kicked in and he launched the digital fabric printing company Digital Textiles Northwest, using the latest dye sublimation technology. He also founded the interactive fantasy gaming site Velo Fight! Mike then returned to the insurance industry and showcased his strategy expertise for a variety of companies. This led him to his final corporate venture at Assurance where he started as Chief Information Officer and transitioned to the role of Senior Vice President. The company’s sale sent Mike on a path of retirement. At the time of his death, Mike was working on yet another venture, Digsbury, with his brother Steve.

During his recent retirement, he found his oasis on San Juan Island. Every spare moment he was not travelling the world with Michelle, he was out fishing. Being very hands-on, Mike milled his own wood from fallen trees at his property, was in the process of hand cutting stone for a wall, working on his boat and planning his dream home. Known for his generosity, Mike and Michelle shared this special property with everyone close to them, offering a place to stay, fabulous fishing trips and rides on his beautiful boat.

A service will be held on August 24 at the Woodmark Hotel in Kirkland, WA.

In Lieu of flowers, donations can be made in his memory to Team Booger, a non-profit youth cycling program, of which Mike was a board member. He was passionate about this organization that uses cycling as a catalyst to teach kids to give back to their community while helping them achieve their goals in cycling. Venmo: @teambooger, Instagram @teamboogerfanpage.