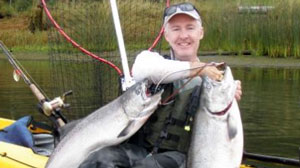 It’s with heavy hearts that we convey that on November 19, 2022, Scott Brenneman, Kenmore Air Express’ chief pilot who had flown for the company since its 2006 launch, was involved in a fatal airplane accident while performing a test flight for another local aviation company, of which the cause is still unknown.

Scott was a loving father of three children, a devoted husband and a friend to many. Scott was highly respected for his piloting skills, training capability and the way he engaged with his passengers and colleagues.

The Kenmore Air family was shocked and devastated by the sudden and tragic passing of his life and wishes to support his surviving family during this period and into the future. Those wishing to join in this effort may send a check to Kristen Brenneman in care of Kenmore Air or contribute online to the crowd funding site established by Scott’s family.

Scott’s loss is felt deeply by all of those he touched and his memory will be maintained in the highest esteem by his Kenmore Air family.