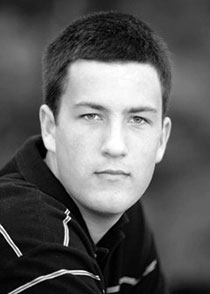 Landis (Lando) Pederson, 20, of Friday Harbor passed away on August 8, 20ll while swimming with friends at Lawson Pond. He was born on April 17, 1991 in Olympia, WA and moved to Friday Harbor in 1993 with his parents Richard and Rhonda Pederson.

He attended Friday Harbor schools and graduated in 2009. Landis attended Central Washington University where he made many friends and explored his independence.

As a youth he participated in many sports activities. His first "real" job was as a visitor's Ambassador in Friday Harbor where he developed his great communication skills. Landis loved to talk to everyone. He also loved rap music, being physically active and staying in touch with his friends on the phone and internet.

In lieu of gifts or flowers donations may be made to the Animal Protection Society of Friday Harbor in Landis's name.

Arrangements are in the care of Evans Funeral Chapel and Crematory, Inc., Anacortes, WA and the San Juan Islands. To share memories of Landis, please sign the online guest register at www.evanschapel.com.