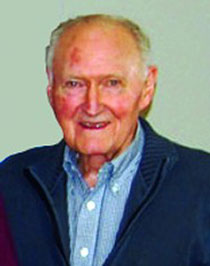 Roger Crosby passed away peacefully on June 27th while vacationing in Glacier National Park, Montana. He suffered a severe stroke and was transported to Kalispell Regional Medical Center where he lived another nine days with Joan at his side day and night. Roger's children were also able to be with him. Thankfully he suffered no pain. Roger was 91 years old.

At an early age Roger and his family moved from Wyoming to Spokane, WA. He enjoyed playing in orchestras and bands; including playing French horn in the Spokane Symphony while in high school. Notable in his early life is that for two years he was yo-yo champion of Spokane!

Upon receiving his undergraduate degree from Washington State University Roger moved to Seattle where he received a law degree from University of Washington. He spent five years in private practice before becoming a corporate lawyer for Burlington Northern, Inc., (formally Northern Pacific). He retired from the company as Vice President and General Counsel in 1982.

Roger loved the water and the mountains. He met Joan, the love of his life, on a chair lift and they subsequently skied frequently in the U.S., Canada and Europe. They purchased their property on Orcas in 1974 and built their home along the shoreline outside of Deer Harbor. This island and its wonderful community claimed their hearts as no other place had.

Roger served on the OPALCO Board of Directors for 22 years. He was a member of the Orcas Island Tennis Club, the Orcas Island Yacht Club and the Deer Harbor Community Club. During his early years living here he actively promoted and succeeded in getting single party phone lines and equitable charges. He also worked diligently to improve cell phone service on the islands.

A memorial will be held at 2:30 p.m. on Saturday, August 6th at the Orcas Island Community Church in Eastsound.

Submitted by the family.