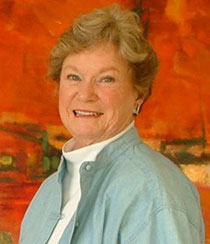 Ann Walbert-Yelverton died at her home near Friday Harbor on the morning of Tuesday, August 23, 2011. She had suffered from the effects of ovarian cancer.

Ann was born to Nelson and Gladys Cummins in Dix, Illinois, on May 25, 1930, and was raised on her family's country property where they grew and shipped apples. While she was still a child she developed a passion and talent for art. Art became the focus of her interests and shaped her life. After high school in Mount Vernon, Illinois, she enrolled at Millikin University in Decatur, Illinois where she received a degree in fine art, graduating in 1952. She received additional training at the Chicago Art Institute. Ann began her professional career as a commercial artist and then taught painting and sculpture at the Wheaton, Illinois high school.

Ann and her late husband, Richard Walbert, lived for many years in Chicago before moving to Carmel, California upon Richard's retirement in 1984. In Carmel, Ann established the Ann Walbert Studio and she became one of the leading painters in that vibrant art community. She gained particular recognition for her “atmospheric abstract” paintings, a signature style that offers reflective expressionist treatment of landscapes. She also created scores of realistic plein aire and still life paintings. Most of her work was executed in oil on canvas, though she did many watercolor paintings as well. Richard Walbert died in 2002. She married Jack Yelverton in 2006 when Ann and Jack moved from Carmel to Friday Harbor.

In addition to her husband, Ann is survived by her son, Scott Meyers, her daughter-in-law Brigit Waring and grand daughters Lindsey and Jamie, who reside on Lopez Island. She is also survived by her brother, Dr. James Cummins and his wife Cindy of Knoxville, Tennessee.

Ann was recognized as a painter of atmospheric abstract works through the many scores of her canvases that hang in private collections throughout the country and the many works that are owned by residents of San Juan Island. She was equally adept at realism; her landscapes, still-life works and portraits are widely admired. Ann was known for her strong use of color and mastery of brushwork as well as bold composition.