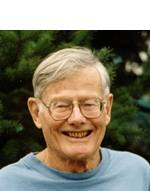 John Marx, of Friday Harbor, passed away peacefully at age 90 on February 3, 2012, in Bellingham, WA, after a brief illness. John had been a resident of Friday Harbor since 1983, when he retired there with his wife Georgia Baciu.

John was born in Chicago, grew up in Tucson, and was a graduate of the University of Arizona and the Harvard Business School. After brief stints working as an engineer for Douglas Aircraft and Columbia Steel, John spent 28 years at Ampex Corporation in Redwood City, CA, at various management positions in production planning, marketing and finance.

John was very active up to his passing with a variety of activities including Pilates, backpacking, kayaking, skiing, singing, sailing, tennis, traveling and swimming.

He was also active in numerous organizations and causes, including the Friends of San Juan, the San Juan Singers, St. David's Episcopal Church, the Nature Conservancy, the Sierra Club, the San Juan Preservation Trust and the Earth Justice Defense Foundation.

John will be fondly remembered by friends and family for his generous spirit, passionate opinions on every topic, interesting conversations and engaging personality. He was particularly proud of his feat of climbing all 13 of California's 14,000 ft peaks.

A memorial service will be held at St. David's Episcopal Church on Saturday, February 11, at 2 pm, with a reception to follow.

In lieu of flowers, donations can be made to the Friends of the San Juans, the San Juan Preservation Trust or St. David's Episcopal Church.