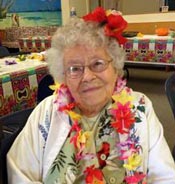 Barbara E. Dann, 93, of Friday Harbor, Washington died peacefully at her home on Friday, April 25, 2014, with her daughter, Janet by her side.

She was born on March 30, 1921 in Irondequoit, New York, a suburb of Rochester, to Arthur Alfred Stanford and Elsie (Stanbridge) Stanford, both of whom emigrated from England to Irondequoit in 1913.

She was the youngest of three children. Barbara grew up a tomboy, preferring to climb trees and play baseball with her brother and his friends rather than playing dolls with the girls in the neighborhood.

It was not surprising that she chose to attend the State University of New York at Cortland where she majored in Physical Education and received her Bachelor of Science in Education degree.

Her first position was teaching Physical Education to boys and girls, grade school and high school, and included coaching the varsity teams because it was during World War II and male teachers were mostly in the service. It was during that time that she met and married Bob (John Robert Dann).

Shortly thereafter, Bob joined the Navy. Their son, John, was born while Bob was stationed in Boulder, Colorado. After his time in the Navy, Bob worked for Eastman Kodak for two years, and then took a leave of absence to obtain his Ph.D. in Organic Chemistry at the University of Colorado.

Bob and Barbara returned to the Rochester area where Bob again worked for Eastman Kodak in the Research Laboratories. Their two daughters, Janet and Cathy were born in Rochester.

Barbara taught physical education in the Irondequoit School System and volunteered her services in many organizations. She was den mother for the Cub Scouts, Brownie leader, troop leader and later district chairman for the Girl Scouts. She was also active in the P.T.A. and the Episcopal Church women's organization.

While their children were in high school, Bob and Barbara hosted six foreign students, Barbara studied for her Master’s Degree and they were very active in various dancing groups in Rochester.

When they retired to San Juan Island, off the coast of Washington State, Bob and Barbara immediately started an International folk dance group and a Scottish Country dance group in their home.

Barbara was instrumental in rescuing the machines Jim Crook had made to make his own woolen clothes.

Because Barbara was concerned over the lack of Christmas decorations, she organized a committee that started decorating the Town of Friday Harbor for Christmas.

Barbara was preceded in death by her husband, Bob.

She is survived by her son and daughter-in-law, John and Roxana and their three children, Hanan, Jessica, and Ariana; daughters and sons-in-law, Janet and Tsolo, Cathy and Michael and their son, Eamon.

A funeral service will be held at 1 p.m., Saturday, May 24, 2014 at St. David’s Episcopal Church in Friday Harbor followed by a reception at the church. Interment will be held at 3:00 p.m. at Valley Cemetery, following the reception.

In lieu of flowers, memorials may be made to:

Arrangements are in the care of Evans Funeral Chapel and Crematory, Inc., Anacortes, WA and the San Juan Islands. To share memories of Barbara, please sign the online guest register at www.evanschapel.com.