[This column first ran in April 2003] The season of blue camas is upon us. The delectable lily and icon of Northwest prairies is now in flower and our island scape will soon be lush with its legendary blooms.

My most vivid impression of camas came while walking a rocky upland trail and finding it nearly impossible to get a foothold without stepping on one of the delicate plants. I watched the sunlight move across its spikes of purplish-blue flowers. The spectrum of color shifted from deep blue to an azure sheen. Then, when clouds passed overhead, a violet blue veil settled over the plant, or was it only an illusion. 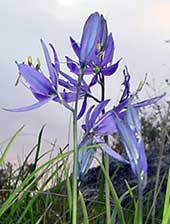 Two species of camas grow in the San Juans. The difference between them is slight. Common camas (Camassia quamash) flowers first; its lowest tepal curves away from the others and wilts separately. Great camas (Camassia leichtlinii) is a bit larger and less common; its tepals twist together as they wilt. Both plants cast a bright blue luster over the landscape and occasionally a spell upon one’s mind.

Meriwether Lewis, of the Lewis & Clark Expedition, penned these famous words in his journal in the spring of 1806: "The quawmash is now in blume and from the colour of its bloom at a short distance it resembles lakes of fine clear water, so complete in this deseption that on first sight I could have sworn it was water."

Camas has thrived in the islands for centuries. It was an important plant culturally and nutritionally to the Northern Straits people who came here in the spring and summer to hunt and to gather food. On the mainland the coveted plant grew extensively across the southern prairies of western Washington and beyond. Disputes erupted between neighboring tribes over prime camas beds, and a rich lore developed around the wildflower’s role in saving early explorers from starvation. With European settlement of mainland prairies, Northwest Natives turned toward the islands as one of their sources for the precious plant.

The prize they sought was the camas bulb: smooth, onion-like and deeply seated in the soil. When steamed, some said it had the sweet taste of creamy potato or stewed pumpkin; others were not so complimentary. It was rich in nutrients if not easily digestible.

The bulbs were harvested at the end of the camas bloom, usually in late May, so they would not be confused with those of death camas which often grew in association with the quamash. Once on Yellow Island, I noticed death camas growing along the margins of the trail. The land steward suggested that the Lummi’s (presumed to have harvested camas on Yellow) may have pulled the death camas out and thrown it to the side as a precaution against unwittingly harvesting its poison bulbs.

Many of the camas beds in the islands were historically open to everyone, although favored locations were likely owned by prominent Native families. The First People preferred to gather camas on rocky south-facing slopes because the shallow soil made it easier to get to the bulbs with their digging sticks.

The Natives’ sojourns to the islands accomplished several tasks. The men hunted for waterfowl and fished for spring salmon, while the women gathered bulbs, picked berries and roots, and harvested mussels, clams and other marine invertebrates. Once the camas beds had been gleaned, the meadows were often fired to insure their fertility for the next season and to prevent the encroachment of Douglas fir seedlings and other vegetation into the area.

The camas bulbs were steamed in pits often lined with sword fern and salal. When the steaming was complete, the bulbs were dried and stored in cattail baskets. The season may have been short, but the bounty provided an important food staple for the winter.

While the days of gathering camas on the islands are gone and the plant’s habitat significantly reduced by development, the striking lily still grows commonly throughout the archipelago on prairies, grassy knolls and even along sunny, moist forest edges. One of the best places to see camas is American Camp. It flourishes by The Redoubt and along the Finlayson trail. My favorite spot is next to the parking lot at Jakle’s Lagoon. The grassy area that slopes toward Griffin Bay is rife with blooming camas growing among western buttercups, death camas, chocolate lilies, field chickweed and several other species. It is a serene setting - perfect for enjoying the wildflowers and perhaps taking a moment to appreciate the importance of camas to the rich cultural history of the islands.