The last week of summer I stopped by the San Juan County Land Bank office in Friday Harbor to visit botanist Eliza Habegger. It was Planting Day at their brand new nursery and while I may have been looking forward to fall birding, Eliza already had spring wildflowers on her mind.

Early last March I had joined Eliza at the Westside Preserve where we spent part of an afternoon caging sprouting satin flowers to protect them from the deer browse that takes a heavy toll on the beautiful and uncommon wildflower.

Later, Eliza returned to retrieve the seeds from those matured plants and others on Cady Mountain. Olsynium douglasii is one of a short list of native blooms including camas, shooting star, chocolate lily, western buttercup, tiger lily, spring gold, prairie starflower, and columbine that were slated for the first phase of the Land Bank’s Native Plant Nursery Pilot Project. The seeds collected will be raised in their nursery over the winter and the seedlings out planted back to preserves some as early as next fall.

The south-facing slopes, grasslands, and oak savannah where the seeds were collected represent remnants of an ancient prairie ecosystem that was nearly lost to the encroachment of forests, invasion of non-native plants, the lack of fire that was once used by the Coast Salish to keep open spaces available for cultivation, and to development. In more recent times, deer have been a major factor in wildflower demise, as well, foraging on the succulent blooms before seeds can be set for the next generation. Restoration of these habitats and wildflower blooms are among the goals of this pilot project (See SJNN/Restoring Wildflowers).

As a long-time admirer of satin flower, I was glad for this opportunity to meet with Eliza again and to see the seeds of the next generation of these beautiful plants.

Eliza had developed a meticulous plan for the operation. The seeds collected during the spring and summer had been carefully catalogued and stored for safekeeping. Now the plugs, trays, and beds were readied with mixtures of compost and sand in just the right proportions for each species.

The raised beds at the nursery had already been planted with seeds of great camas and chocolate lily from the Westside Preserve and Cady Mountain on San Juan Island and Turtleback on Orcas. Louisa and Jane had begun sowing seeds of shooting stars and spring gold in the plugs. This was painstaking work and Louisa was careful to insure that only three or four seeds were placed in each receptacle. In this first year of the project, seeds from some species had been hard to collect.

Eliza showed me a small packet of satin flower seeds knowing they were my favorite. They were to be planted in plugs, too. She poured some of the seeds into her hand – minute, brown, finely pitted orbs. There were not many of the irises this year, so just one seed per plug would have to suffice. I smiled and thought ahead to a time when the six-tepaled blooms, still just embryos inside these tiny seed casings, might emerge into stunning purple apparitions perched on the bluff along Haro Strait.

There still was lots of work to be done, though. I walked inside with Eliza and Shaun where they counted seeds of other species. Eliza admitted to being at bit "fussy" about the process. It was not hard to understand why. There were dozens of jars, envelopes, and packets of seeds stored at the office and paying attention to details was essential to the survival of the plants.

I glanced at the names on the small packets of seeds on the table: Triteleia grandiflora, Cady Mt. 2013; Triteleia hyacinthina, Cady Mt. 2013; Tiger Lily, Lilium columbianus, Orcas Island, 2013. A jar with oblong seeds of Lomatium utriculatum was especially intriguing. The wafer-thin ivory sheaths appeared fragile yet held the prospect of next year’s spring gold.

Once the count had been completed and the additional seeds ready for sowing, Eliza had a special task for Shaun: a bonus plant! She presented a small container of seeds from Lithophragma parviflorum (prairie starflower). There was an audible gasp as we peered into the bottle and realized that the seeds were no larger than specs of dust. Oh my goodness!

Eliza set out six pots: three with the straight soil mix and three with a sphagnum and soil mix and entrusted the transfer to Shaun who would be more than up to the challenge of placing the minute bits of life in the soil.

While this drama was unfolding, Casey was getting ready to sow the brodiaeas, Hooker’s onion, common camas, and tiger lilies in deep trays at the far end of the nursery. The day’s planting was going well, but this was only the first phase of the seed sowing process.

Eliza explained: "Many of our native wildflower seeds need to go through a cold, wet period before they can germinate. We sow them when the fall rains begin, let them sit out all winter, and they germinate in the very early spring -perhaps February or March 2014. Some of them will be ready to plant on preserves - mostly Cady Mountain - next fall.

Others will need another season or more to be large enough for transplanting. In the nursery, we will sow additional species (including Idaho blue-eyed grass, Douglas’ aster, and Canada goldenrod) in October, and the remainder next March. The latter are species that do not require the cold/wet treatments in order to sprout.

"Species that I expect to plant out on Cady Mountain in fall 2014 include western buttercup, Oregon sunshine, California oat grass, fine-leafed desert parsley, Pacific woodrush, and possibly others."

I asked Eliza when she hopes to see the first blooms from these seeds. "I would expect to see some of the annuals bloom next year including bi-color lupine, sea blush, and blue-eyed Mary," she replied. "I doubt the perennials will do much flowering in 2014."

Meantime, the sowing of native seeds continued. As I left, Shaun, Jane, Judy, and Casey were finishing the day’s plantings. It was heartening to see the care that these wildflower enthusiasts bestowed upon this year’s class of precious seeds. I suspect we all share the vision of these embryos sleeping through the winter in pots, plugs, and raised beds at the nursery, much as their wild counterparts are resting in the cold soil on the slopes of Westside Preserve, nestled near ancient Garry Oaks on Cady Mountain, and settled amidst grassy balds on Turtleback. 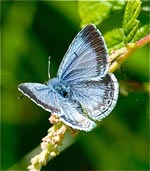 And so, the Land Bank’s prairie restoration project moves ahead one wildflower species at a time. We all have our own reasons for loving wildflowers. In addition to the obvious role they play in the intricate fabric of life, wildflowers make our spirits soar, give us an aesthetic sense of place, keep us connected to our cultural heritage, and inspire creativity.

The arrival of spring wildflowers is especially important to me because of my work with butterflies. Early emerging species count of the blooms as nectar sources: the Spring Azures in buttercups; Silvery Blues in lupine; Propertius Duskywings in camas; Ochre Ringlets and skippers in our native grasses; and Pale Tiger Swallowtails in Columbia lilies.

One of our more dynamic butterflies, the Anise Swallowtail, counts on camas, columbine, and lupine for nectar, and uses fine-leaved desert parsley (spring gold) as a host plant. All these wildflowers are among those currently being cultivated in the Land Bank's seed project. 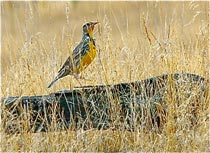 Restoring even a small wildflower bloom may take several years, as in the case of camas, but it is time well spent. Out planting Northwest natives, and protecting them on small patches of prairie, helps insure the continuity of our island landscapes in a dramatically changing world. Reclaiming bits of prairie supports wildlife.

In the years to come, when I watch butterflies fluttering over a field of wildflowers, see fat humblebees collecting saddlebags (the sacks on their back legs) full of yellow pollen from the blooms, and hear meadowlarks and bluebirds singing in native grasslands, I will know it has been worth the hard work.

Author’s Note: For readability, Sowing Seeds was written referencing the common names of wildflowers only. Here is a list of the common and scientific names of the plants mentioned above.

SAN JUAN NATURE NOTEBOOK / SOWING SEEDS © Susan Vernon 2013. No part of this column, text or photographs, may be reproduced in any manner without the written consent of the author. Susan is the author of RAINSHADOW WORLD – A Naturalist’s Year in the San Juan Islands. She can be contacted at susanvernon@sanjuanislander.com.