Last week, I watched a Long-billed Dowitcher foraging in the brine of a saltwater lagoon on the island. The appearance of the statuesque shorebird was an indication that mid-summer and fall bird migration had begun.

The dowitcher - standing nearly a foot tall - was resplendent in blackish-brown garb, each dark feather on its scalloped back edged in buff. The brick red wash extending across its breast and belly was faded foretelling its molt out of breeding plumage in August. It strode the mud with a purposeful gait using its fine long bill to probe the substrate for protein-packed marine invertebrates to sustain its stout frame. For me, its presence, while not unexpected, was deeply felt and a reminder of the fascinating life histories of animals we seldom encounter.

There was a soft, warm breeze blowing across the lagoon that afternoon. Summer may have been in full swing but another seasonal shift was already underway. Shorebirds - like the dowitcher - having spent the short nesting season in Canada, Alaska, or even the far reaches of eastern Asia were passing through the San Juans headed for their fall and winter domains to the south. Some were venturing only a short distance down the Pacific coast while others favored Mexico, Central and South America, or even islands in the South Pacific. While the stream had only recently begun, this shift was perceptible along our coastline where small flocks of sandpipers and plovers gathered to feed.

The San Juan Archipelago is an important stopover for shorebirds that inhabit the rims of our oceans, inland seas, coastal estuaries, and inland lakes, marshes and bogs. While not a major hot spot like Boundary Bay in British Columbia or the Gray’s Harbor estuary on the southern Washington coast where tens or hundreds of thousands of birds may pass by, the islands provide a smaller, yet vital, refuge for these graceful and gregarious wanders. A migration of many thousands of miles may seem awe-inspiring to us, but for the birds it is an imperative fraught with perils at every turn. They need safe places like San Juan beaches and mudflats to stop, rest, and replenish from their exhausting peregrinations. It is in these moments of respite that I value getting even a brief glimpse of their restless lives.

On my early-July walk, I had expected to find Least Sandpipers (the world’s smallest shorebird and a breeder of northern boreal forests and coastal wetlands) and Western Sandpipers (ground- nesters of the Alaskan tundra) along a sand and gravel beach I knew offered good foraging opportunities. And there they were scurrying at the tideline pecking in the fertile wrack. The foraging was intense but the migrants were wary and took to the air at the slightest provocation. I learned long ago the best way to enjoy the birds – and not to disturb them – was to sit quietly along the drift and let them come to me. Oftentimes, the peeps come close enough that, with a good pair of binoculars, one can distinguish even the slightest variations in their richly hued rufous feathering and the intricate black and white patterns of breeding plumage. These birds were in transitional garb, their feathers looking a bit worn and undefined as they shifted to winter whites.

As I stopped to sort out the sandpipers, Barn Swallows swooped out of the pebbled sky snatching insects from the thin air above the wrack; a bold dragonfly with gold-veined wings darted past a pile of driftwood herding goldfinch out of its path; and the lilting refrain of a Swainson’s Thrush resonated from a nearby stand of Douglas firs. Soon the thrush’s serenade would cease as the salmonberry bird, along with the swallows and buttery goldfinch also would follow the sun south although not likely on the same route as the sandpipers.

I was still at the drift line when a Killdeer arrived in full rant -- its piercing “kill-dee” call alerting me to its territory. Year ‘round residents of the islands, these handsome, red-eyed plovers are fixtures on our beaches. During migration, Killdeer shares its space with sojourner kin and it was only my intrusion that seemed the transgression. I moved on quickly. 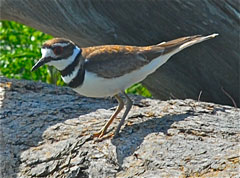 Farther down the beach I arrived at the small saltwater retreat I hoped would prove productive. The tide was out leaving the briny mudflat exposed. Microscopic diatoms and other algae, polychaete annelids (worms), tiny crabs, grubs, and mollusks all lived either at the surface or within the mixed substrate of mud, sand and gravel there. The shoreline was edged with lush, deep green Salicornia – a pickleweed that reflected the salty nature of the realm. It is a food plant for the larvae of some species of insects there. This is a sophisticated matrix of life that, even in a relatively small area, likely feeds thousands of shorebirds. I counted several dozen sandpipers (mostly Westerns) foraging in halting gait about the substrate frenzied to consume their fill while the low tide obliged. This scenario – the stopover and frenetic feeding – would continue sporadically through the late summer into early fall with several more species notably Semipalmated Plovers, Black-bellied Plovers, and Whimbrel taking advantage of this refuge, as well.

I found a spot to sit quietly out of the birds’ range of view. After several minutes half a dozen silver-sheened shorebirds flew in low over the drift and onto the flat. They did not see me in the tall grass. I heard a rush of air at they careened overhead, instinctively ducked, then regained my composure and changed my vantage point slightly. What luck, for it was that slight shift in view that directed my gaze toward a large, full-bodied shorebird foraging quietly forty yards away.

It was the dowitcher standing confidently on slender yellowish-green legs; long bill held straight out; prominent white brow; strong gaze. It had the countenance of bird-world royalty although perhaps only in my eyes. Long ago this bird was called Robin Snipe and Red-breasted Snipe for its dazzling brick plumes. I knew where there was one dowitcher, there were likely others, and a quick scan produced two more of the gentle birds quietly feeding.

Unlike the rushed forage of the Western Sandpipers, the dowitchers were calm, methodically working their way along the flat, assertively probing the mud with their dusky bills. They seemed in no hurry.

Dowitchers nest in the Far North. In our part of the world, they breed inland from the coast of western Canada and northern Alaska possibly to eastern Siberia. Both Long-billed Dowitchers (Limnodromus scolopaceus) that prefer freshwater habitats, and Short-billed Dowitchers (L. griseus), oriented to saltwater realms, are somewhat common. Were those truly Long-bills I was watching or were they the Short-billed kin? I was not entirely sure, as these birds are notoriously hard to differentiate at a distance. It was enough, though, to see either dowitcher and to bear witness to a few brief moments of their lives.

I watched the birds for about thirty minutes until a Greater Yellowlegs – another sandpiper passing through – arrived and, spotting me in the grass, sounded a sharp “tew-tew-tew” admonition that sent the dowitchers into an abbreviated flight to the far side of the lagoon. I was surprised that the “tattler” called me out of the grass but appreciative of its keen protective instincts. The spell was broken and it was time to go before my presence caused the gathering to grow nervous.

I left with a sense of gratitude for having seen these marvelous birds once more and for knowing that there are still places in the San Juans where the shorebirds (and other species) can safely stopover to rest before the next leg of their journeys.

When I see shorebirds, I always wonder where they had been and where they are going. Could these dowitchers have bred in eastern Siberia as some references suggest? Where was that high-spirited Greater Yellowlegs going – perhaps only to the southern U.S., but possibly to South America? What about the Wandering Tattler I sometimes saw resting on the rocks just below the Cattle Point Lighthouse in the fall? A solitary bird, I read its journey’s end is the South Seas. How extraordinary! All these birds have different destinies. And always they move through the islands with single-mindedness to carry on.

How do they do it – navigating by the sun and stars; following coastal landforms; or sharing the instincts of their flock? And what does it matter? What do their comings and goings through the islands mean to us?

To me, shorebirds represent the mysteries – and miracles -- of the natural world. Perhaps we have lessons to learn from them about perseverance, living in the moment, and trusting our instincts. I ponder the dowitchers and their unwavering imperative to journey south and ask myself what will I be accomplishing while these amazing birds continue to chart its own maps of the world?