The view from the top of Lawson’s Ridge was stunning – or so I had been told. In nearly thirty years of living on San Juan Island I had never ventured to the summit of the 740-foot hilltop adjacent to the Trout Lake watershed. It was private property. I knew folks walked up there occasionally but I bided my time. It was worth the wait.

As spring approached, the San Juan Preservation Trust, in partnership with the San Juan County Land Bank, announced their plan to purchase a 141-acre parcel on the ridge and surrounding slopes to forestall development of the vast tract of native island habitats. The acquisition would insure the preservation of this richly diverse realm and provide multiple recreational opportunities for the public. Stands of old growth conifers, wetlands, mixed deciduous woodlands, grassy balds and steep, rugged precipices are all part of the terrain. This is one of the last large un-fragmented properties on the island and a natural treasure. Old survey maps revealed the original name of the ridge was “Mount Grant” (likely after Ulysses S. Grant) and so the Campaign to Save Mount Grant began.

Lawson’s Ridge is one of those places most islanders take for granted. We barely notice its broad shouldered profile and the sensuous contours of the surrounding hillsides. The massive conglomerate of ancient wild rocks is part of the bedrock of our little island but its inaccessibility had put it out of mind. Now that the Preservation Trust and Land Bank have secured a substantial down payment on the property public access is allowed.

I cleared my schedule in late April to finally take a look. The goal of the first visit was to see that highly touted summit view. I started out early on a gray morning forecast to turn bright and headed up the gravel road from the trailhead off West Valley Road. The way was steep in places winding through a green corridor of old-growth Douglas-fir, western red cedar, hemlock and pine. Rocky slopes were crisscrossed by gullies and ravines thick with sword fern and salal. The rocks glistened from rain. The woods reverberated with bird chatter.

I reached the top under a flurry of light rain and intermittent gusts of wind but a little weather did not diminish my reaction to the 360-degrees of unobstructed view. It was spectacular! The archipelago spread out before me like that “… mighty chart of Nature … “ explorer C.B.R. Kennerly wrote about in 1859 while standing on tiptop hill on Stuart Island transfixed by a similar view perhaps looking in this very direction.

I took in the intoxicating evergreen-infused air. Where to look first? That was easy. A bald eagle glided by at eye level and I turned northeast to watch. It was an immature bird; the dark chocolate feathers on its back, belly and wings were still mottled with white - and too young yet for the signature snowy pate. It was carrying a stick in its talons. Was there a nest nearby or was it, more likely, practicing some new skills? The bald made several passes as I gazed across the Salish Sea to Vancouver Island and the Canadian Gulf Islands to the north. One usually looks up to see eagles; at times I looked down upon this bold bird as it continued to navigate the currents and cross winds that bumped into the side of the mountain. The eagle flew away as a red-tailed hawk materialized out of the clouds making slow circles in a patchwork of gray and blue sky. Two mature balds soared higher still to the south where the wind had cleared the overcast. Mount Grant was an eagle’s aerie to be sure.

As it turned out I was not alone on the summit that morning. Another enthusiastic islander was taking in the view, too. “This is massive,” she declared, smiling broadly. “ There is a feeling of wildness up here …”

She was right. There was a feeling of freedom, too, evoked perhaps by the sight of those iconic birds soaring so high and effortlessly in the broad expanse of sky over the summit.

I strolled on a path cushioned with chartreuse moss. It meandered among rocky outcroppings pockmarked with blue-green, silvery-gray and orange lichens among others. Tiny ferns with a celadon glaze grew from crevices in the stones and comingled with blue camas. Lustrous patches of field chickweed flourished in the rocky till, sparking spring gold nestled in tall grasses with more camas, bright pink sea blush glowed in the diffused light, and thousands of tiny blue and yellow forget-me-nots unfurled in a shy display of understated floral bliss. A white-crowned sparrow shouted its signature song of self-adoration, orange-crowned warblers trilled in the trees, and wrens continued their buzzy rants protesting, perhaps, my invasion of the solitude of their world.

I turned east for another vantage point orienting in the direction of Mount Baker intuiting its presence far away on the cloud-shrouded Cascadian mainland. Closer to home the rounded profiles of Lopez, Orcas, and Shaw Islands seemed firmly anchored in the inland sea. Looking down from my summit perch, I could see West Valley Road winding east toward town. A small, chattering flock of violet-green swallows swooped through a cut between the conifers just off the rocky precipice pursuing swirls of tiny insects before diving with seeming cheerful exuberance toward the valley below.

In one of those old-growth firs the unmistakable rhythm of a wood warbler’s song drew my attention. It took a few moments to track the series of wheezy notes to the masked Townsend’s warbler. It was resplendent in gray, black, white and yellow plumage designed to mimic the subtleties of sunlight and shade in the trees. Nature’s perfect camouflage. Newly arrived from points possibly far south, the Townsend’s was insistent in song. There were brown creepers, chickadees, nuthatches, juncos and thrushes nearby, too. 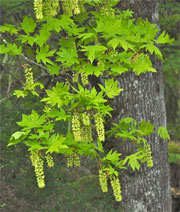 The wind kicked up again so I moved down mountain stopping in a small clearing to look at big-leaf maples in bloom. The furrowed bark of the mature trees was etched in deep green moss; long, slender clusters of brilliant yellow flowers hung from the boughs of the old trees - beacons for the bees. As I admired Acer macrophyllum, I heard a spirited See-u-weet call from the shadows and knew the Pacific-slope flycatcher had returned home for the breeding season. I departed to the harmonic strains of a pair of varied thrushes.

From a naturalist’s point of view, this is an amazing place – a realm where my curiosity will never be completely satisfied but where many questions will be answered. I was energized to explore new terrain so close to home. Only a few days passed before I returned to Mount Grant with artist pals Nancy and Lewis Spaulding. Nancy had been to the summit two weeks earlier on a wildflower walk with the Preservation Trust and, like me, was eager to return. We headed straight for the summit under clear blue and calm skies – a delightful spring day. Nancy’s eye for details was perfect in pointing out distant landmarks like Twin Sisters on the mainland and, in the intricate system of waterways, Obstruction Pass and Thatcher Pass, too.

While Nancy and Lewis headed off looking for new vistas to spark their creativity, I stayed at the summit watching for warblers. While waiting, a tiny rich-brown and rusty- gold butterfly with white fringe and white etchings on its hind wings caught my eye. It was perched on Teasdalia by a mossy outcrop. I held my breath to stay still and took a photo of the gossamer-winged beauty for identification. It was Moss’s elfin – an uncommon butterfly in the islands best known for its association with stonecrop, its host plant, that was likely growing nearby. The elfin has a wingspan of just over one inch. This adult would live its entire short life, possibly measured in merely days, on this small patch of mossy mountaintop. I was cheered to get even a fleeting glimpse of the little soul. 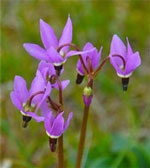 The Spauldings returned and we explored lower on the mountain. Nancy, too, admired massive big-leaf maples in bloom and I suspected was looking for a yellow warbler to alight upon those clusters of bright yellow flowers – a powerful visual image to be sure. I wandered into the woods looking for wildflowers. Lewis disappeared with his camera.

Under the thick shade of madrones and cedars I was surprised to find dozens of shooting stars still in bloom; others were already going to seed. I was puzzling over their shady repose when Nancy returned to happily report having found several spots in the woods where sunshine was filtering through the canopy forming little spotlights where white fawn lilies, blue camas, and more stars were thriving in the duff. She was eager to get some of her impressions down in her sketchbook.

Past several hummocks rife with woodland starflowers Lewis was looking for just the right angle to photograph an alluring patch of western buttercups shining in full sun on the crest of a steep slope that invited closer, yet careful, investigation another time.

We shared a picnic lunch – and our impressions of the mountain - on an open patch of ground surrounded by wildflowers. Tiny spring azure butterflies fluttered nearby. Lewis pointed out a hummingbird resting atop a high, spindly Douglas-fir down slope. Nancy and I were amazed he had spied it. The female was perfectly appointed in green feathers the shade of cedar boughs with a madrone bark red wash on her sides. Poised against a backdrop of rich rain-nourished conifers she was nearly invisible. Soon it was time to go. Our packs were filled with field notes, sketches, and photographs we would use as reference points for this fine excursion. Our hearts were filled with joy.

The allure of Mount Grant was undeniable. Seeing San Juan Island from a new perspective was almost like seeing it for the first time. In anticipation of a long-term relationship with this proposed preserve, I began learning the language of this place in bird songs, the sound of wind rushing through the conifers, the whirring of hummingbird wings, the drumming of woodpeckers in the old growth, and the hooting of great-horned owls. 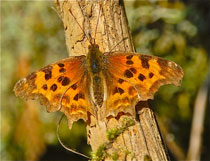 I watched dragonflies levitate on gilded wings out of a wetland; flycatchers perch-hunting from alders; and satyr anglewing butterflies mating in a sun-dappled glade. I marveled at the intricate patterns of old man’s beard lichens draped over the gnarled limbs of ancient Douglas-firs, and smiled at a hairy woodpecker standing knee deep in a tangle of woodland starflowers and sword fern while chipping away with its finely engineered bill at a moss-encrusted stump foraging for grubs. And, when I saw ripened salmonberries along the trail, I knew Swainson’s thrush would arrive soon from the south and the sound of its melodious song would float through the forest announcing our island summer had begun.

And so, my first spring with Mount Grant is drawing to a close. I am pleased to be making the acquaintance of such a beautiful and bountiful place. It is a haven for wildlife – a place where both flora and fauna can thrive and survive. It is a place for islanders to thrive, as well. Ahead is the summer solstice and many new discoveries on the mountain. But first a tip of the hat to the San Juan Preservation Trust and San Juan County Land Bank for partnering on The Campaign to Save Mount Grant. Thanks to the generosity of early donors the campaign is off to a fine start. Count me in. 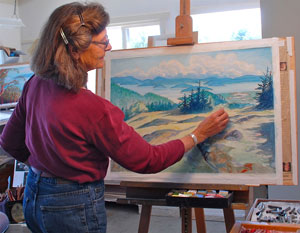 For more information on the Campaign to Save Mount Grant go to: sjpt.org/mountgrant/

Susan can be contacted at susanvernon@sanjuanislander.com