(Originally posted December 2008) Two weeks ago, I watched a hummingbird fly through a snowstorm to get to the bird feeder that was hanging by my back porch. It was a female Anna's hummingbird, barely 4-inches in length, and weighing less than one-half ounce. She arrived in a blur of green feathers, hovered over the red plastic receptacle hanging from an old post, and dipped her delicate, slightly down-curved bill into a bowl of sugar water using her tongue to retrieve the liquid until she was sated. She must have known I was watching her, but considering the snow, gusty wind, and riot of other birds that had careened across her flight path, it did not seem to matter. This was likely her first-light flight. It was imperative to restore energy lost during the long, frigid night, and swirling snow was obviously not a deterrent. Anna's wings were beating about 50 times per second as she whirred through the dense air. It was a rare and wonderful sight I shall not forget. 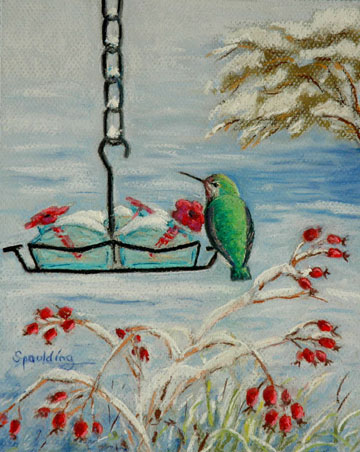 Anna's hummingbird has been in the islands for some time, but I had never observed one close at hand. She was beautiful: bright green above - the color of salal - and pale gray below with a faint greenish/yellow wash along her flanks. Her throat, the gorget, was emblazoned with a triangular-shaped mottling of coppery iridescence. Through binoculars, I could see a small white spot behind each eye and, when she perched, white tuffs on her rump accentuated dark wings held close to her body. (The male is more brightly colored with a dazzling pinkish-rose head and throat.)

I first saw Anna's at my place in mid-November when a hummingbird fly-by alerted me to the possibilities of a closer encounter. I rushed to the store, bought a feeder, hung it conspicuously, and waited. Soon I had two female hummers stopping by for energy drinks. It was not until the big storm, though, that my feeder appeared to become more a necessity than a convenience.

The female who arrived in the storm stayed. She perched in the ocean spray nearby occasionally displaced by boisterous songbirds that also used the jumble of vegetation for shelter. She was tenacious in defense of her territory fighting off the second hummingbird that was eager to appropriate the feeder. They darted about the small flyway between the porch and the thicket chasing one another around and around the post where the feeder was hanging. Always victorious, she returned to the same bare-twig perch; her body swayed back and forth as she stood guard. The feisty visitor fed every 15 minutes or so throughout the day, even snatching spiders from a web underneath the feeder without breaking her rhythm. She always left right at sunset charting the same course north toward a stand of Douglas-firs as faint ribbons of pink and blue light faded into the darkening western sky. During the coldest days, I de-iced the drinking holes in the feeder every hour or so, and sometimes brought it inside to defrost the sugar water. Anna waited for my return often emitting a cacophony of clicks to demonstrate her impatience. Once the temperatures returned to the 30s, she fed less often and disappeared for hours at a time likely foraging elsewhere in the neighborhood.

Anna's hummingbird (Calypte anna) was first described by French naturalist Rene Primevere Lesson in 1829. He named it after Anna Massena, Duchess of Rivoli, a European noblewoman who was a patron of the sciences.

Hummingbirds (members of the family Trochilidae) are New World birds found only in the western hemisphere. Originally, Anna's hummingbird occupied a limited breeding range in northern Baja and southern California, but by the early 20th century it had expanded its realm to northern California. In the mid-1930s with the proliferation of urban and suburban gardens displaying non-native plants that bloomed all year, this species rapidly extended its range northward and to the east. The first sighting of Anna's hummingbird in Washington State was near Seattle in 1964, and the first breeding record was near Tacoma in 1976.

In their book, Birding in the San Juan Islands, Lewis and Sharpe reported the first sightings in the archipelago were in November of 1983 at a feeder on San Juan Island, and on Lopez Island in June 1986. While still not common, the birds were seen occasionally in residential areas like Friday Harbor, Eastsound, and Lopez Village into the 1990s.

I remember many years ago hearing about Anna's hummingbirds sighted in the Roche Harbor area, and five years ago a neighbor confided having Anna's at his feeder on property near the Friday Harbor Marine Labs. In the last two or three years, the reports of Anna's on San Juan Island have increased significantly, and folks from Cattle Point, Kanaka Bay, San Juan Valley, Mitchell Bay, Hillview Terrace, Friday Harbor and points in-between have delighted in hosting this robust humming bird throughout the year. Last summer, Nancy and Lewis Spaulding had the familiar rufous hummingbirds and Anna's hummingbirds on their property at the same time - both breeding. I got my first glimpse of these tiny titans sparring for feeder space and blooming wildflowers in their lush garden last June during the Artists' Studio Tour.

I wondered what made it possible for Anna to overwinter in the sometimes-harsh climate of northwest Washington when rufous hummingbirds leave by late July or early August following late-blooming wildflowers to southern climes.

I found several explanations in the literature: (1) they have a slightly larger body mass than the rufous, calliope, and black-chinned hummingbirds that reside in Washington state in the spring and summer; (2) Anna's regulate their daily energy budget less by nocturnal torpor than by daily gain in energy stores increasing its body mass by over 16% during the course of the day*; and (3) a larger portion of their diet appears to include spiders and other insects that metabolize as a slower rate, thus giving them increased energy stores to get through the cold nights. They also harvest sap from sapsucker wells in trees.

This species appears ideally adapted to continue to expand its range into areas where it was once unknown. From Baja to British Columbia, Arizona, Texas, and Wisconsin, Anna is becoming a common bird throughout the West and beyond. While its natural habitat preference is chaparral, steppe-shrub, open woodlands, and riparian woodlands, Anna also is taking advantage of the proliferation of hummingbird feeders everywhere to enhance its survivability in colder climes.

Here on San Juan Island, there are abundant resources supporting Anna's year-round appearance. The blooming season for native shrubs extends almost all year. A week before winter solstice, Ron Keeshan reported red-flowering currant already in bloom on his property. Gardens play an important role, too. For instance, Colleen-Howe Gregory has Anna's hummingbirds at Mitchell Bay Farm nectaring on non-native plants including charity mahonia, winter-blooming jasmine, and dawn viburnum. At the Spauldings, a hardy fuscia seems to be one of the main attractions, with viburnum, winter-blooming honeysuckle, and jasmine about to bloom.

In the small wild space outside my back door, the hummingbird feeder appears to be helping to sustain Anna until wild plants bloom. The patch of young madrone, Oregon grape, sword fern, salal, and ocean spray offers shelter to nearly two dozen species of birds. I have written before about the merits of ocean spray (Holodiscus discolor) and I am convinced Anna appears here, in part, because she has this hardy and productive shrub to retreat to.

Here she comes now, headed for the feeder. She takes fifteen sips of nectar. Her tiny black feet are tucked up into her white-feathered belly as she sups, and the greenish wash on her quivering flanks turns chartreuse in the light, the same color as the lichens on the twigs nearby. And there she goes, in a flash of green light, to the ocean spray where she may perch a while in the momentary white silence of this snowy day.

When I first encountered Anna this fall, I pondered her vulnerability to the cold weather ahead. During the storm, I watched the hummingbird hold her own in a riotous gathering of sparrows, nuthatches, chickadees, juncos, and kinglets that were also using feeders near my porch. I knew the other birds were well adapted to withstand the cold even without my support, but I wasn't sure about Anna.

Then I witnessed a fascinating behavior I had only read about. A red-breasted sapsucker had taken up residence in an old Douglas-fir nearby several days before and had drilled dozens of holes in the deep furrows of the trunk of that tree mining for sap. During a calm in the storm, Anna flew over to the knarled fir, investigated several of the sapsucker's wells, and began extracting liquid oozing from the rectangular holes. The large, redheaded orchard bird kept drilling as the hummingbird satisfied her appetite thanks to its hard work. I was reminded of the complex web of life that connects and sustains all the wildlife of the archipelago. The tiny humming bird - relatively new to our island - was surviving, in part, due to the efforts of the hardy woodpecker, a long-time winter resident. Appearing frail, she is actually quite tough, highly adaptable to the change in weather, and opportunistic, too. Anna seems to be doing fine.

Susan Vernon is a former executive director of The Whale Museum, co-founder of the San Juan Nature Institute, and author of Rainshadow World – A Naturalist's Year in the San Juan Islands.

SAN JUAN NATURE NOTEBOOK / HUMMINGBIRDS OF WINTER Copyright 2010 by Susan Vernon. No part of this column (text or photographs) may be reproduced in any form without the expressed written consent of Susan Vernon. All rights reserved.