In the Santana Lab at the University of Washington, our research focuses on the relationship among ecology, anatomy, and behavior in mammals. Much of our lab's research involves bats, as they are one of the most diverse groups of mammals — they comprise nearly a quarter of all mammalian species.

Despite the incredible range of shapes, sizes, behaviors, and the ecological importance of bats, two common images seem to be perpetuated in the mainstream media: that of small brown flying rodents, and rabid vampires. 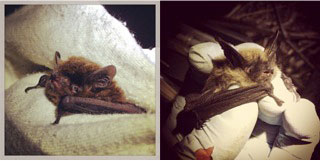 Example of two species in the genus Myotis caught on San Juan Island: M. volans and M. evotis. It is important to note that M. evotis cannot be distinguished from M. keenii in the field; genetic analysis is needed to confirm species. Photo credit: R.M. Kelly.

Batting a thousand ... and then some: diversity of bats

While it is true that vampire bats exist, they are only 3 out of over 1,200 species of bats, and they only occur in the new world tropics. Of the remaining bat species, more than 70% feed exclusively on insects. Even though most species are small (less than 60 grams) and sometimes brown, they are far from being flying rodents.

Bats evolved around 55 million years ago, and a recent genetic analysis suggests that their closest relatives are in fact carnivores, ungulates, and cetaceans1. Microchiropteran bats (a.k.a true echolocating bats) occur on every continent except Antarctica and exhibit high diversity even at higher latitudes.

For example, the State of Washington is home to 15 species of bats, 10 of which have been documented to occur on at least one of the San Juan Islands.

Tales from the cryptic diversity:

In the San Juan Islands, 6 of the 10 bat species that have been documented are in the genus Myotis (Figure 1). Commonly referred to as “mouse-eared bats”, species in this genus abide the stereotype, as they are small bats (between 4 and 25 grams) and usually some shade of brown.

Despite their general morphological similarity, these species exhibit high “cryptic diversity”. This means that while they may look very similar or even indistinguishable in some cases, they are in fact separate species that differ in terms of their ecological roles.

For example, research in Germany suggests that differences in ear size between two closely related Myotis species explains their differences in hunting strategies and diet2.

This partitioning of resources enables multiple Myotis bat species to coexist without competing directly with each other. However, untangling these differences in bats is particularly difficult, as it is logistically challenging to study their behavior in nature. 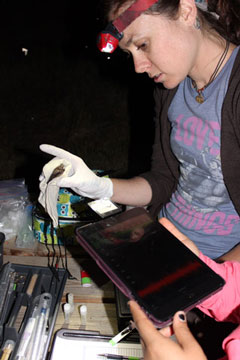 Background behind my research:

I am interested in understanding whether ecological differences among closely related species influence their patterns of dispersal. Bats are the only mammals capable of flight, and are often assumed to be unaffected by barriers to dispersal (e.g. habitat fragmentation or geographic barriers)3.

However, dispersal ability in bats may be more closely linked to their ecological requirements4-7. Barriers to dispersal can reduce genetic diversity and increase risk of extinction8-10. Therefore, comparative studies can improve our understanding of the relationship between ecology & dispersal in bats and help inform their conservation.

Using a comparative approach, I began investigating whether differences in dietary and/or roosting ecology influence patterns of dispersal and gene flow among bat species in the San Juan archipelago and northwest Washington State.

I began my research this July on San Juan, Orcas, and Vendovi islands. While I based my research out of Friday Harbor Labs, I needed access to field sites across the islands. Therefore, I sought collaboration with San Juan County Land Bank, The San Juan Preservation Trust, and the San Juan Island National Historic Sites: English and American Camps.

These organizations granted me access to their preserves throughout the islands, where I carried out my fieldwork. At this point you may be wondering, how exactly does one go about studying bats?

This was a common question I received while in the field. Biologists need to employ a combination of methods in order to carry out a comprehensive survey of bats, including mist netting, acoustic monitoring, and roost surveys.

In the bat toolbox: While this combination of sampling methods can make things labor intensive and costly, relying on solely one method underrepresents certain species and leads to biased and incomplete results11. Each method has pitfalls and may be biased towards specific types of species.

For example, while passive ultrasonic detectors are great for monitoring bat activity, it is impossible to distinguish individual bats based on their calls. Therefore, one cannot draw any reliable inference about population size from this type of data alone. Similarly, mist netting (capturing bats in a fine-mesh net) can be biased toward low-flying species.

For my study, I combined acoustic sampling with mist netting, which allowed me to confirm species, sex, and age information, and also collect tissue, fecal samples, and record their echolocation calls .

I am now processing the samples back at UW to analyze the population structure and diet of bats on the islands. 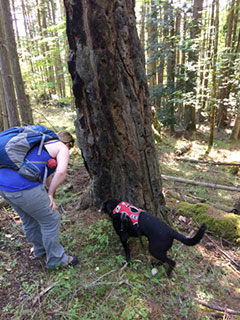 Additionally, I collaborated with UW Professor Sam Wasser to employ scent detection dogs (a.k.a conservation canines) to locate tree roosts of bats on the islands (Figure 3). It turned out that going from finding Orca scat to sniffing out bats was more challenging for the dogs than we initially anticipated, and much of the summer was dedicated to refining our sampling design.

Despite these obstacles, the dogs showed remarkable ability to track the scent of bat feces in trainings, and we successfully confirmed one tree roost. Using infrared video, we were able to survey bats exiting the roost and are analyzing fecal samples we collected to confirm species.

We hope to refine this sampling methodology for future field seasons as well as more broadly in the field of roosting ecology, as this approach represents a non-invasive alternative to many traditional studies of roosting ecology.

This pilot field season would not have been possible without support and advice from my advisor: Sharlene Santana, Jim Kenagy, Ruth Milner, and my collaborators at San Juan County Land Bank, the San Juan Preservation Trust, and San Juan National Historic Sites.

Additionally, I must thank my field assistant Elena Cheung, as well as all the volunteers from Friday Harbor that helped out in the field and all of the residents on the islands that invited us onto their properties to collect this valuable data. Funding sources for this project include the Washington Research Foundation and Benjamin Hall Graduate Fellowship, the Richard and Megumi Strathmann Endowed Fellowship at Friday Harbor Labs, and the FHL Emily Carrington Endowed Student Travel Support Fund.

Rochelle Kelly is a Ph.D. student at the University of Washington. She is advised by Dr. Sharlene Santana in the Biology department, and began studying bats in the San Juan Islands this summer.