As a graduate student I wanted to study how animals evolve, but not from an adult perspective. I wanted to understand how embryos develop. How does a single fertilized egg go through development as an embryo to make a specific animal? What genes are turned on and off during this process? How do the cells of the embryo become different mature cell types? 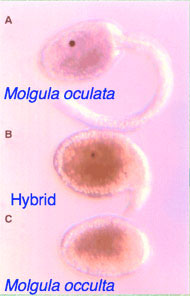 Fig. 1: The hatched ascidian tadpoles of the tailed Molgula oculata (top) and tailless Molgula occulta (bottom), and a hybrid larva. The hybrid in the middle is from an egg of M. occulta fertilized with the sperm of M. oculata. It has a short tail and a pigmented sensory otolith.

I was especially interested in the vertebrate body plan, with a spinal cord on the backside of the animal and a belly on the other side: when and how did this body plan evolve? At the time, everyone believed that ascidians (“sea squirts”) were the animals to study in order to answer this question. So, off I went from the University of Iowa to the Marine Biological Lab (MBL) at Massachusetts in 1983 to see ascidian embryos for the first time and study how they develop.

Wow — ascidian eggs are so cool, with colored egg cytoplasms that make them look like Easter eggs, and they develop fast — a tadpole hatches about 24 hours after fertilization. I decided to finish my Ph.D. at Iowa studying chicken embryos and then do postdoctoral studies working on ascidian embryos in 1988.

I soon found a very cool model system, where tailed ascidian species and closely related tailless ascidians live in the same place near Roscoff, France...so off I went to study them. These species' eggs looked so similar that I decided to do something daring: why not try to cross-fertilize them? This rarely works with ascidians because their eggs have a very strong chorion membrane to keep other species’ sperm out, but I reasoned that they would be able to cross hybridize if they were closely related.

So, I tried the experiment and waited until the wee hours of the morning to watch them hatch. Very tired by then, I thought perhaps I was imagining it when I saw little tails and eyespots appear in the hybrid embryos!

I excitedly told my Postdoctoral advisor and collaborator, Dr. William R. Jeffery, and he watched the next night and thought he saw the same thing. This was very exciting, had never been reported before, and would make a great model system to study how genes elaborate morphology (Figure 1)!!

We published many papers on these two species but it was hard to move forward without genomic information, which was very expensive at the time (Swalla & Jeffery, 1990; 1996). 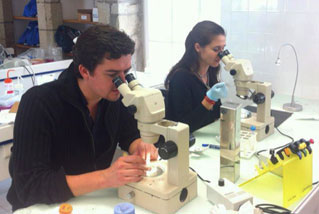 Fig. 2: Lionel Christiaen (NYU) and Claudia Racioppi (Stazione Zoologica Naples) work in the lab at the Station Biologique de Roscoff on the tailed and tailless Molgulid species. A few years ago, my research lab had the opportunity to collaborate with Dr. C. Titus Brown at Michigan State University, to sequence the transcriptome of these two ascidian species (Lowe et al. 2014).

This has been a wonderful collaboration, funded by the NSF STC BEACON – Evolution in Action: http://beacon-center.org/. Several of FHL's summer REU students have worked on these French ascidians, and a graduate student in my lab, Zander Fodor, has been working on this project at FHL this fall.

You might ask, how do we work on two species from France at Friday Harbor Labs? We go and collect samples in France and then bring them back and do the molecular analyses here. We actually work on marine invertebrates from all over the world here at FHL, as my lab uses molecular techniques that are applicable to any species.

We have freezers full of samples, similar to the Smithsonian Institution or any place that is working on large-scale genomic projects.

Eventually, we sequenced the genomes of these two Roscoff ascidian species with Dr. Lionel Christiaen at New York University (NYU) (Stolfi et al. 2014), and now we have all of the genomic tools that we need to unlock the mystery of why one of these species fails to develop a tail during development (Figure 2). Our working hypothesis is that the metamorphosis program is turned on early during the development of these tailless species, causing them to degrade their tails while they are still developing.

We will eventually test these hypotheses by doing functional experiments with tailed ascidian species to see if we can inhibit tail formation.

Information from these publications is cited in this issue of Tide Bites: