Years ago when I stepped into a river and experienced the strong forces of the current, I wondered how animals are able to live in such a challenging environment. This experience stayed with me, and the interplay of currents and animals is still one of my main research interests today.

Clingfishes are small fish that usually live in shallow water or the marine intertidal. The ~110 known species of this family can be found almost all around the world. While most fish swim freely in the water or rest on the bottom, a few species have attachment "devices" to cling to substrate surfaces.

What makes clingfishes special is the suction disc on their belly. This feature gave this fish family its name. The suction disc enables the fish to attach themselves in strong currents to avoid the danger of being washed away or to prey on firmly attached animals such as limpets. 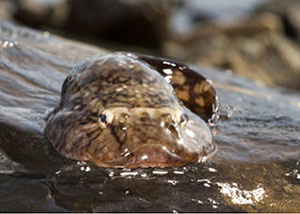 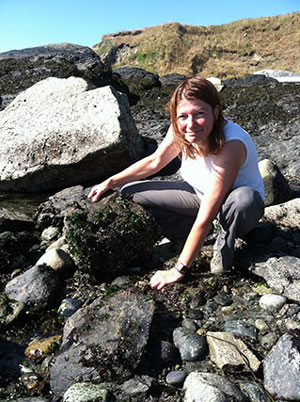 Northern Clingfish can hold onto different surfaces very strongly. The attachment forces are as high as 150-250 times the body weight of the fish. Considering what a human can do (1-2 times its body weight), that is extremely impressive. But this fish can do more: while manufactured suction cups can only attach to smooth surfaces, this fish can attach to rough surfaces very well (Wainwright et al. 2013; Pennisi 2012).

Actually, they stick even better to rough surfaces than to smooth ones, and can attach to surfaces as rugged as roughest sandstone (Ditsche et al. 2014). The rim of the Northern Clingfish's suction disc is covered with hierarchically sized structures; papillae (~150µm) that are covered with rods (~5µm), which themselves are divided into small filaments at their tips (~0.2µm) (Figure 3).

We had proposed that these hierarchical structures on the disc rim enable a perfect adaptation to the irregularities of rough surfaces (Wainwright et al. 2013; Ditsche et al. 2014). Video on Science Friday: www.sciencefriday.com/video/02/27/2014/this-fish-sucks.html

Now we are very excited that our newest results confirm this hypothesis. Applying a paired design, we measured the complete suction disc first and then repeated the measurement after removing parts of the disc margin. The suction disc can still stick to smooth surfaces when a part with hierarchical structures is removed. However, the altered disc failed on rough surfaces. 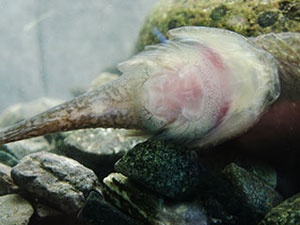 Fig. 3: View of the belly of Northern Clingfish with its suction cup. Click to enlarge a close-up of the suction disc. Photo credit: P. Ditsche.

In their 2014 summer research projects, the REU students Lisa Truong (Wellesley College, MA) and Christina Linkem (University of Hawaii) investigated the habitat conditions of Northern Clingfish (Figure 4). We measured rock roughness as high as the ones investigated in the lab and in a few cases even higher. This indicates that the ability to attach to rough surfaces is essential for Northern Clingfish in their natural environment.

Roughness is not the only obstacle that clingfish have to deal with. In aquatic environments, solid substrates are usually fouled by bacteria, algae, and invertebrates. This growth changes the biomechanical conditions for attachment. To study the impact of biofilm on clingfish attachment, we incubated surfaces of various roughness for six weeks in the Salish Sea. Then we compared the attachment forces on un-fouled and fouled substrates. Clingfish were able to attach to both fouled and un-fouled substrates, but attachment was higher on un-fouled, rough substrates compared to fouled ones. Nevertheless, even on fouled surfaces Northern Clingfish generated impressive attachment forces of about 150 times higher than their body weight. We were very excited that these results made the cover story last July in the renowned “The Journal of Experimental Biology” (Ditsche et al. 2014). 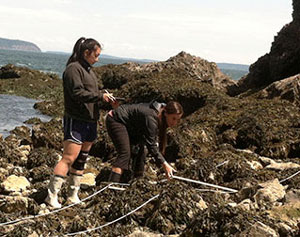 We are aware that these results are just the beginning of our understanding of the impact of biofilm on the biomechanics of attachment, and many open questions are waiting to be answered (Ditsche and Summers 2014). Another research goal is the development of biomimetic suction cups. Northern Clingfish’s attachment abilities are very desirable for technical applications and this fish can provide an excellent model for strongly and reversibly attaching to rough, fouled surfaces in wet environments.

After my undergraduate degrees in Germany, I worked for several years in applied science in the area of water pollution mitigation and control. Driven by the impulse to gain deeper understanding of the interaction of the animals with the stresses of their physical environment, I was pulled back to pure science and went back to University.

After finishing my PhD at the University of Bonn, I worked at the Universities of Bonn and Kiel (Germany) before I came to the Friday Harbor Laboratories for the first time with a postdoctoral scholarship of the German Academic Exchange Service in 2012.

It was planned to be a three month research stay and I had to go back to Germany, but this island really hooked me and I was drawn to come back. I was very excited when one year later the possibility turned up to come back to Friday Harbor and work with Adam Summers on an NSF project on sticky fish in the marine intertidal.