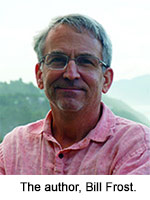 In the mid 1950s, Charles Yentsch and Donald Pierce brought some orange sea anemones back to the lab from their UW bottom trawls in Puget Sound. Anyone who has spent time poking around tide pools is familiar with these “flowers of the reef,” which sit motionless with their crown of colorful tentacles out, attracting the attention of small fish and other prey that happen by. But these alluring tentacles are a death trap. Anything contacting them is harpooned with nematocysts and pulled by the tentacles to the anemone’s mouth, where the victim soon disappears. In the lab, several anemones were fortuitously placed in the same aquarium as a Dermasterias sea star, which is an anemone predator.

To the amazement of Yentsch and Pierce, when the seastar approached and touched one of the anemones identified as Stomphia coccinea, the latter responded by detaching from its perch and swimming away to safety! Their observations, published in a 1955 issue of the academic journal Science, were considered a significant discovery for two reasons.

First, it hadn't been known that any sea anemones could swim, so this was really surprising. Second, anemones have the most primitive nervous system in the animal kingdom, with no brain or central nervous system. All they have to work with is a diffusely-distributed network of neurons that doesn’t seem up to the task of generating such complex behavior. This is what makes Stomphia so interesting: how can it do what it does without a brain? 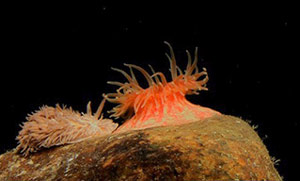 Fig. 2: An Aeolidia nudibranch (left) about to contact a Stomphia anemone (right).

Many investigators before me have been fascinated by this question. One of the first was Paul Sund, who came to Friday Harbor Labs in the summer of 1954 to take the Invertebrate Zoology course. The course instructor was Dixie Lee Ray, then an Associate Professor of Zoology at UW, who later became the state governor.

Paul joined the UW graduate school and Dr. Ray, now his supervising professor, encouraged him to do his masters thesis on the newly discovered swimming anemone. Paul was a good choice: he arrived at Friday Harbor Labs with a new device called an aqualung, and pioneered the use of SCUBA for research at the Labs. He used SCUBA to make the first observations of Stomphia’s behavior in its natural habitat, and published his research in a 1958 issue of the Quarterly Journal of Microscopical Science.

His paper remains to this day one of the best of many on the behavioral and physiological bases of Stomphia’s escape swim. Paul Sund wound up in Anacortes, and recently wrote a reminiscence of his time at the Labs and of diving around the San Juan Islands with Charlie Yentsch, which can be read in the FHL library. 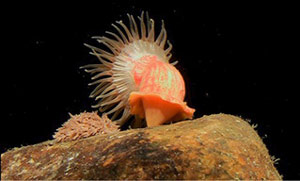 Since Paul's research, there have been many published studies of Stomphia, often by scientists that traveled from around the world to collect and work on them here at Friday Harbor Labs. While we’ve learned a lot, we still haven’t cracked the central question of how this animal without a brain is capable of such complex behavior. Two years ago I came to FHL from Chicago to see it for myself.

Together with Rhanor Gillette from the Univ. of Illinois and two undergraduates from Lake Forest College, we studied Stomphia’s responses to two different predators: the nudibranch seaslug Aeolidia papillosa and the sea star Dermasterias imbricata.

To our delight, Stomphia deepened its mystery by displaying different behavioral strategies for each predator. It responded to the nudibranch with a mix of aggression and caution, stinging with its tentacles (Figure 2) and then quickly yanking them out of sight and closing up tight after each attack. If it was successful at driving away the Aeolidia, then Stomphia would stay put and unfurl its tentacles, returning to business as usual.

Only occasionally did we see it detach and swim upon contact with Aeolidia (Figure 3). On the other hand, contact with the sea star Dermasterias always elicited Stomphia’s full escape swim response. Thus we found that Stomphia has an even more complex behavioral repertoire than had been previously reported: it can distinguish between two different predators, and employs a different behavioral strategy in response to each one.

This summer I’m at Friday Harbor Labs working with Chris Brandon, Tigran Norekian, and Jeremy Berg, another Lake Forest College undergraduate, staining Stomphia’s nerve net to see whether it might have undescribed specializations capable of mediating such behavioral sophistication. Driving this work is the hunch, shared with scientists all the way back to Paul Sund, that Stomphia’s secrets may have relevance to how and why centralized brains evolved from the distributed nerve nets of our distant ancestors. 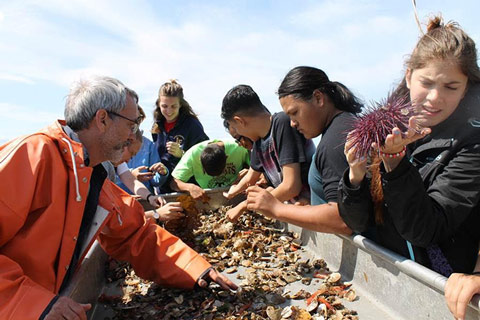