Early this year, the pink coralline-algae and anemone-covered rocks (as well as everything else) were moved out of their decades-long home at the base of the stairs in the main Fernald lab building, and transported by truck, bucket, and wheelbarrow to temporary tanks in Labs 8 and 3. My article in FHL's spring eNewsletter included "before" and "empty tank" photos, but not a "during" shot.

Here's a photo of our capable Maintenance crew wrestling mud and rocks out of the drained tank in early February (Figure 1). These have been among the most beloved rocks in San Juan County, and staff and visitors alike were sorry not to see them this spring and summer while the bottom floor of the building and the tank were under construction. 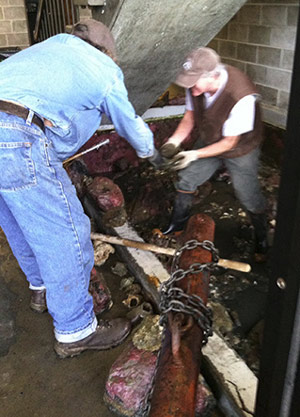 Fig. 1: The FHL Maintenance gurus, including Jeff Seitz (left) and Tom Campbell (right), worked hard lifting the rocks out of the tidepool tank. The largest was around 150 lbs and the crew used our Bobcat loader (with an arm extension and some chain, foreground) to transport that rock back to the ocean. After the rocks were all out of the tank, many buckets of mud were scooped out to get to the empty "before" shot in the article from the Spring eNewsletter. Photo credit: P. Kitaef

Now at long last, these rocks and critters have returned! Our Maintenance crew refurbished the tidepool tank by lining the cement with fiberglass and then covering that with new potable paint before the same standpipe was re-installed. By the end of July there was water flowing, and we let it circulate for some days in preparation for the animals’ arrival.

On Thursday August 13, 2015 the entire Ecology Between and Below Pacific Tides (EBBPT) class along with Megan Dethier, Alex Lowe, and Max Kessler (a Young Investigator Prize winner working at FHL this summer) got to work — gently filling buckets and a few coolers with heavy rocks and their attached residents.

The most challenging animal to move was the large "beaded bag" anemone (Figure 2), which had stretched its body to cover two rocks that had to be lifted simultaneously by Olivia Graham and me. On the other end, EBBPT student Julian Campillo Luna (dressed in his dry suit) chilled out in the tidepool tank and helped place rocks carefully and strategically. Although it had taken ten days to empty the tank in preparation for Fernald construction, it took less than 3 hours to re-fill it due to so many helping hands! 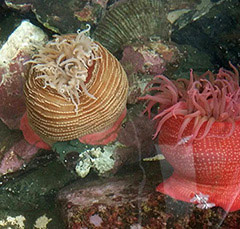 Fig. 2: The beaded bag anemone Urticina columbiana (left) is partly closed here, showing the tubercles on its column that contribute to its common name. The white-spotted anemone Urticina lofotensis (right) was easier to move into the refurbished tank because it seems content attaching to only ONE rock at a time!

Now that our tidepool/stair tank is properly re-established (Figure 3), you’ll notice a few changes from the way things were before: first, there are no gunnels or sculpins in there now. They were difficult to care for and rarely seen. And second, you may notice it’s a bit less crowded with rocks than it was previously. We hope this allows more room to properly view the beautiful animals and algae that are kept there. People have commented that the tank looks deeper than it was before, but it's actually the same depth it always has been! It looked shallower before the renovation because of all the accumulated mud and the multiple layers of rocks in it.

If you take a look soon, keep your eye out for the patch of pink hydrocoral (Stylaster verrilli), the orange cup corals (Balanophyllia elegans), a rose star (Crossaster papposus), and a pedal sea cucumber (Psolus chitonoides). How many anemones can you count in our tidepool tank? Welcome back to all the marine life! 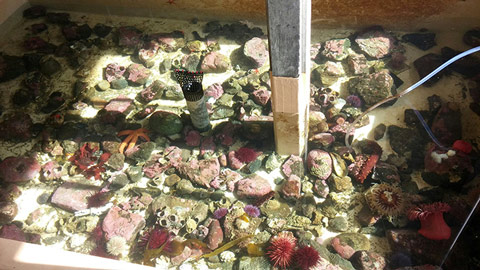