Skates are cartilaginous marine fishes that are closely related to sharks. They can be considered cold-water rays since they generally replace ray species in cool temperate, boreal, and deep-water regions. Upon first inspection, skates appear to be flattened sharks. Although they don’t grow as large as some shark or ray species, some skates, like the locally occurring (and aptly named) Big Skate, grow to over 2 meters in length and can weigh in excess of 200 pounds. They are slow-growing, long-lived, and lay distinctive leathery egg cases ("mermaid's purses" to your average beachcomber). 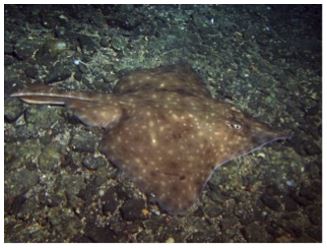 Information on skates has been historically scarce for several reasons: 1) they have not supported lucrative or sustained fisheries, 2) the species are similar in coloration and morphology and therefore are extremely difficult to identify, and 3) they are not nearly as charismatic as large, toothy sharks.

Because skates have been something of an uninvestigated mystery to biologists and fishery managers, some broad generalizations have been perpetuated concerning the ecology of this group. Skates are widely considered to be generalist predators that occupy sandy and muddy seafloors. However, there are nearly 300 described species of skates among an approximate global total of 1,200 cartilaginous fishes; 1 in every 4 species of shark, batoid, or chimaera is a skate!

Furthermore, the number of known skate species is increasing steadily as the polar and deep-water regions are being explored, and genetic analysis has assisted morphometric analyses to reliably distinguish species. Skate diversity is not simply a result of the extreme depth range (0 to more than 4000 m deep) and cosmopolitan distribution of this species; skates occur in speciose assemblages. The perceived ecological roles and considerable diversity of skates presents a paradox: how can there be so many skate species if they all perform the same ecological function? Niche Theory — that no two species can coexist if they occupy the same ecological niche — states that this situation is not possible.

With this problem in mind, I sought to understand and then compare the ecological roles of skates in two eastern North Pacific assemblages, one off central California and another in the western Gulf of Alaska. The continental shelf and upper continental slope of each region contains five species of skate. Three species off California are relatively small ( 1 m) and limited in distribution, the California, Sandpaper, and Starry skates. Two other species, the Big and Longnose (to 1.9 m, Fig. 1) skates, are relatively large and widespread.

In fact, these two species also occur in the western Gulf of Alaska. Two other species that occur in this Alaskan assemblage also are large-bodied (> 1 m) and range to the Western Pacific, with a third co-occurring smaller, more restricted species. Using these assemblages as study systems, I posed the following general questions in my Ph.D. studies: 1) where do skates like to live, 2) what do skates like to eat, and 3) can a deeper knowledge of skate biology explain the current diversity of skates? 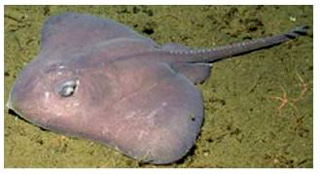 Fig. 2: A juvenile Sandpaper skate (Bathyraja kincaidii), typically found on unconsolidated mud and sand bottoms like the one depicted in this photo from Monterey Bay. Photo credit: MBARI.

To determine the distribution and abundance patterns of skates in each assemblage, I gathered trawl survey data from federal (National Marine Fisheries Service) and state (Alaska Department of Fish and Game) agencies and used it as a basis for analysis. I found that in California, where habitat information was available, skates were not at all restricted to unconsolidated sand and mud habitats. Some, such as the Sandpaper Skate (Figure 2) and California Skate, did prefer these substrates, but others occurred mainly on mixed habitats (Longnose skate, Figure 1) or even rocky reefs (Starry Skate). Each study species off California additionally occupied distinct core regions — or “hotspots,” further differentiating them spatially. In Alaska, three species exhibited obvious spatial segregation, but the core distributions of Aleutian and Bering skates overlapped substantially. When this situation was further explored, however, size differences were noted between Aleutian and Bering skate populations in areas of high overlap. In these regions, the full size range of Bering Skates replaced small, juvenile Aleutian Skates. Since between-species competition (for food or space) is typically greater than within-species competition, this situation may be a mechanism to reduce competition. When further explored, it was noted that in both regions where skate species tended to overlap in catches, they were consistently of different sizes. Skates are therefore not ecologically redundant. Differences in distribution, abundance, and habitat associations alone provide a strong basis for explaining current patterns of skate diversity. Resized JPEG graphic

Fig. 3: Maps of the proportion of euphausiids and crabs in the diets of skates in the western Gulf of Alaska. Photo credit: J. Bizzarro.

But what about trophic differences? Are skates actually generalist predators, as long believed, or are dietary differences also evident? It turns out that a skate really does eat whatever swims, crawls, or wiggles in its general vicinity. The timing and location of collection trawls explained the great majority of dietary variation in each study region — much more than species- and length-based differences did, combined. It was demonstrated that small skates like to eat amphipods, small shrimps, and polychaetes, with medium-sized species incorporating larger decapod crustaceans and fishes, and the relative dietary contribution of fishes-to-decapods is greatest in the largest individuals. The species composition of these general prey types changes based on timing and location of collection hauls; however, when they are in the same area, skates of all species generally eat the same things.

An example of spatio-temporal differences in prey abundance driving dietary differences is seen in the western Gulf of Alaska. During 2007, an extremely cold-water year, euphausiids commonly occurred in the Shelikof Strait region and were abundant in skate diets (Figure 3). Crab predation, by contrast, was much more spatially and temporally variable, reflecting local differences in crab abundance. The stereotype of skates as generalist predators thereby held up — but another unexpected finding proved interesting: even though the skate assemblage in the Gulf of Alaska contained larger species, they fed on a lower trophic level food base than the central California assemblage.

So, what did I learn about the ecology of skates and how can it explain current patterns of diversity in this group? Foremost, I determined that space is much more important than food in differentiating the ecological niches of skates. One stereotype (“skates all live in the same places”) was debunked, whereas another (“skates all eat the same things”) was supported. Well-defined spatial distinctions, coupled with extreme trophic plasticity (flexible diets) probably limit direct competition within skate assemblages when food resources are in limited supply. This same trophic plasticity probably allows them to expand and forage collectively when resources are plentiful, such as during groundfish recruitment or euphausiid entrainment events. Skates are therefore extremely good competitors with other groundfishes, while avoiding much direct within-group competition. This appears to provide a plausible explanation for the question of “How can there be so many species of skate?” 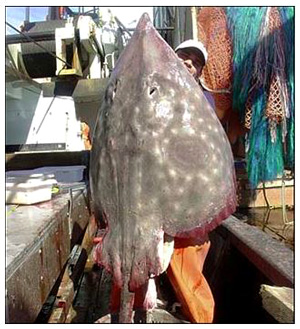 The results of this research have applications beyond an improved ecological understanding of skates. Skates have been heavily exploited by commercial fisheries, which mainly catch them incidentally along with targeted groundfishes (Figure 4). This practice has resulted in major changes in the structure and composition of skate assemblages, and substantial population declines for many large nearshore species. Some skates are among the most threatened of all marine fishes. Management of skates has therefore become a recent priority for the National Marine Fisheries Service.

Ecosystem approaches to management are in development for both study regions, and recent quantitative ecological data are of fundamental importance to this process. Food web models are used in management considerations in the Gulf of Alaska, and spatial management is of primary importance off the U.S. West Coast. The results of this work indicate that fine-scale, species-specific data should not be a research priority for food web model development in Alaska. Improved prey composition and per capita as well as overall consumption estimates, however, were deemed important and will be incorporated to improve the accuracy of the current food web model for skates.

Off the West Coast, species-specific differences are extremely important as a basis for spatial management of skates. Predictive models of skate distribution and abundance patterns were created using the spatial results of this study and will be applied to distinguish essential fish habitat for these species as a basis of potential spatial management. In these ways, explaining how there can be so many skate species may provide a way to keep them around awhile longer.

Joe finished his Ph.D. in the summer of 2015 working with Adam Summers at UW, where he studied comparative resource utilization in eastern North Pacific skate assemblages with applications for fisheries management. He's now working with Mary Yoklavich and the Habitat Ecology Team at the Fisheries Ecology Division of NOAA's National Marine Fisheries Service in Santa Cruz, California. They're engaged in determining spatial associations and trophic relationships of west coast groundfishes, including research to inform species-specific management plans for skates.