In 1955, Columbia Pictures released the thriller It Came From Beneath The Sea, in which an enormous octopus begins terrorizing the good citizens of San Francisco (Figure 1). Though lacking in certain factual details (for instance, the octopus possesses only six legs in some shots) and decidedly biased against the octopus, the film alludes to one phenomenon that is not entirely fictitious.

Fig. 1: Movie poster for It Came From Beneath The Sea. Photo © Columbia Pictures, 1955.

It turns out there are giant octopuses lurking in the depths of urban waterfronts in coastal cities on the West Coast. They are Giant Pacific Octopus (Enteroctopus dofleini), the largest known octopus species in the world. At up to 20 feet in length from one tentacle tip to the other, they are veracious predators of crabs, clams, and other invertebrate prey.

It may seem surprising that they occur in relatively high densities in heavily urbanized areas, where marine habitats are generally thought to be of poor quality and lacking in species diversity and abundance. But if you’re standing at the waterfront in downtown Seattle, chances are there is a Giant Pacific Octopus just a stone’s throw away, denning in an artificial structure provided by humans and foraging in the surrounding seascape.

Octopuses are one of several organisms I’ve been studying as part of my Ph.D. research on the species that inhabit urban underwater environments. Most of us think of the shoreline as the boundary where coastal cities like Seattle end, but in fact the urban landscape extends well beyond this line and deep into the subtidal zone, which is below the level of the lowest low tide. Here, the seafloor is littered with a vast array of artificial structures. Riprap (the rocky material used to make seawalls and breakwaters), concrete slabs, submerged pipelines, sewer outfalls, sunken boats, cars, tires, discarded household appliances, and even garden statues are among the structures that have been added to soft sediment seascapes through urbanization.

All of these materials serve as habitat for marine organisms that rely on hard substrate to settle and persist (Figure 2). A typical urban seafloor is therefore comprised of a complex patchwork of hard bottom and soft sediment habitats. These are the environments I visit regularly on SCUBA for my research. 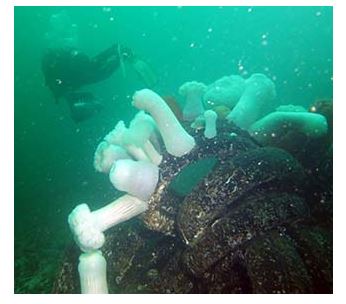 Why work in these settings when there are far more beautiful and pristine places for a marine biologist to practice her trade, like the Friday Harbor Labs? Over the next ten years, the percentage of people living in coastal areas is projected to rise from 50 to 75%, increasing coastal populations by an estimated 2.5 billion people globally. The coastal infrastructure needed to simultaneously support this growth and to mitigate the effects of sea level rise will be extensive.

Despite the widespread habitat modification that is anticipated in coastal zones, we know surprisingly little about the community of organisms that form underwater in response to urbanization. Urban marine ecology is a field in its infancy, and much work is needed to build basic knowledge and a functional understanding of marine ecosystems in urban areas. Such knowledge may be increasingly important if we are to anticipate the challenges ahead for marine ecosystems as coastal zones become increasingly urbanized.

The overarching goal of my dissertation research is to improve our understanding of urban marine ecosystems in Puget Sound, specifically in the subtidal zone. I’ve pursued this goal through a series of research objectives, the first of which is to characterize the community of benthic (bottom-dwelling) organisms that live on rocky surfaces across a gradient of urbanization. To do this, I carefully combed through nautical charts to identify naturally occurring rocky outcroppings and artificial structure such as breakwaters, fishing reefs, and submerged pipelines (which are often covered in riprap to prevent erosion) in the shallow subtidal zone from north of Everett to south of Tacoma.

With the help of UW research divers Rhoda Green, Ed Gulleckson, Dave Thoreson, and many others, I visited each of these sites to collect “photoquadrats” — photos of a standard area of seafloor (Figure 3). These photos were then analyzed for species composition and percent cover in CoralNet, an online platform that uses artificial intelligence with image recognition software (a robot) to streamline the processing of photoquadrat data.

Statistical modeling from these data is still underway, but will ultimately allow me to ascertain how benthic species are distributed across more urban to less urban sites in Puget Sound. 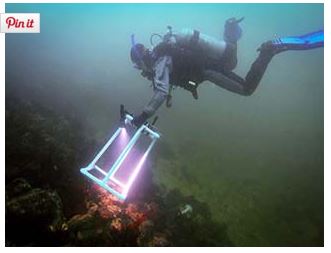 Fig. 3: Eliza conducting photo surveys at the Shilshole Marina breakwater in Seattle. The contraption attached to her camera is a quadrat framer that standardizes the area of rocky substrate to be analyzed. Photo credit: Amy Green.

While conducting photo surveys, I was impressed by the quantity of biomass produced by organisms that live on artificial rocky structures. Subtidal riprap was dominated by a variety rapidly-growing red macroalgae and encrusting invertebrates, such as barnacles and jingle shells. In subsequent sediment surveys, I found that red macroalgae and shell material from encrusting invertebrates were mixed into the soft sediments surrounding artificial structures.

This ultimately leads to the question of whether we are negatively impacting marine organisms by adding artificial structures to urban seascapes.

At this point, you may be thinking, ‘Yes, but tell me more about the giant octopus!’ The studies I’ve just described provided me with an improved understanding of the invertebrate communities inhabiting artificial structures and soft sediments in urban waterways of Puget Sound — important preparation for the adventure I undertook next, examining how Giant Pacific Octopus utilize urban environments in the region.

Fig. 5: Prey items from the midden of a Giant Pacific Octopus, as analyzed by Amy Green. Photo credit: Amy Green.

In the next stage of the project, I partnered with UW capstone student Amy Green. Together, Amy and I visited octopus dens throughout Puget Sound. Octopuses leave “midden” piles outside their dens — trash piles of shells from the various prey items they’ve consumed. For the ecological detective, these octopus trash piles are wonderfully informative, offering insight into the animal’s feeding behavior and prey composition. We collected 46 middens from 24 different sites.

There’s still much to learn about urban marine ecosystems. What is clear at this point is that they are not the depauperate landscapes we had originally assumed them to be. The next time you find yourself on the waterfront in Seattle or another coastal city, consider the complex living world that abounds below the water’s surface. Though it may not be evident to other passersby, the urban seascape is home to many a non-human city-dweller, as well as a surfeit of mysteries.

Eliza is a Ph.D. candidate in the UW Department of Biology and a graduate fellow in the IGERT Program on Ocean Change. She studies urban marine ecosystems under the guidance of Dr. Ken Sebens. If you like what you read above, check out her blog at www.urbanmarineecology.org.

Look for Tide Bites in your inbox at the start of each month! To view previous Tide Bites, visit the FHL archive page located on the Friday Harbor Lab website.