Sea urchins (Figure 1) are an important component of nearshore marine food webs. As grazers, they prevent seaweeds from becoming overabundant. They provide an important energetic link between algae and other organisms by partially digesting kelp into fecal pellets that benthic scavengers and filter feeders can consume. 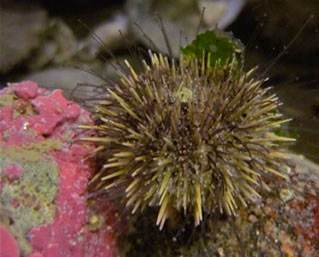 Urchins are also prey for invertebrates, fishes, and marine mammals. However, sea urchins are very powerful herbivores, and in large numbers can reduce subtidal kelp forests into empty landscapes known as urchin barrens. Similar to the effects of clear-cutting a terrestrial forest, this change impacts the species that depend on kelp for habitat and causes declines in species richness and diversity.

This destructive potential means that the interactions of urchins with their predators are extremely influential on biodiversity in coastal habitats. This is illustrated by the classic example of a trophic cascade, in which sea otters in coastal Alaska prey upon urchins, which in turn prevents urchins from overgrazing and allows kelp beds to exist. An analogous system exists here in the San Juan Archipelago, where there are rarely sea otters but the predatory Sunflower star (Pycnopodia helianthoides, Figure 2) was thought to be a driving force in keeping sea urchin populations in check. 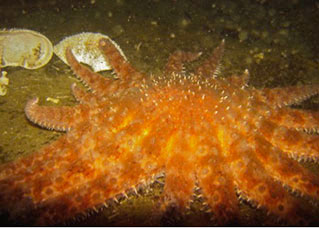 When hunters drove sea otters to near-extinction in the 1700s, the U.S. west coast experienced a rise in urchin populations that caused a transformative decline in kelp. Similarly, on the coast of Washington and here in the Salish Sea, the onset of sea star wasting disease in 2013 has decimated populations of many stars including Pycnopodia (see Tide Bite #14 and this UW News article). In some areas such as Howe Sound (British Columbia), loss of sea stars has already caused this same trophic cascade: releasing urchins from predation has led to more destructive grazing and loss of kelps. However, although the San Juan Islands have also been hit hard by sea star wasting disease, we have seen no evidence of kelp bed destruction here. 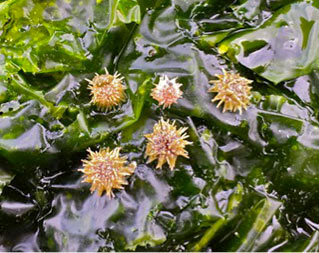 This unexpected lack of urchin response has led to interest in other factors that may affect the survival of sea urchins in the San Juans. Like other animals, urchins are most vulnerable during their larval and juvenile stages: many predatory animals can crush a small urchin (Figure 3), but as they grow, sea urchins reach a size at which they are safe from most predators that are unable to eat them. I postulated that there may be small predators that are able to eat small urchins as efficiently as top predators are known to consume adults and control urchin abundance in many areas. Although we don’t know much about these local 'mesopredators', they may be extremely important in terms of taking over one aspect of the ecological role of the top predator since Pycnopodia have functionally disappeared. 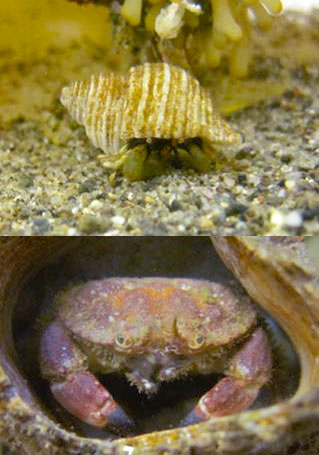 As a ZooBot student in Spring 2016 under the mentorship of Dr. Colette Feehan, I tested this hypothesis in the lab with five potentially predatory animals that are common to the San Juan Islands. Small six-armed seastars, tidepool sculpins, and shore crabs appeared to have no interest in eating juvenile green sea urchins (1-3 mm in diameter). However, hermit crabs did eat small urchins, and pygmy rock crabs (Figure 4) were the most voracious predator, consistently eating more than 80% of the baby urchins within the first day of our experimental trials.

While crab predation on juvenile urchins could be a huge cause of mortality, urchin interaction with their physical habitats strongly influences the efficiency of predation. Their ability to utilize refuges like rock crevices, undersides of cobble, and kelp holdfasts can reduce predation rates on small urchins drastically in comparison to those individuals who do not find a refuge. One structure of interest to me was articulated coralline algae: red algae that build calcareous skeletons (Figure 5). One of the many ecological functions of corallines is that they produce a chemical stimulus that tells free-swimming urchin larvae to settle. In laboratory experiments, I found that juvenile urchins retain their chemical attraction to a local species of coralline algae (Corallina vancouveriensis) and actively choose to move into it and hide themselves amongst its branches. This result indicated that there are benefits for juvenile urchins that live in association with coralline algae. It turns out that one of these benefits is protection from predation: further experiments showed that Corallina effectively increases the survival of juvenile urchins in the presence of both hermit crabs and pygmy rock crabs. This suggests that areas with a lot of coralline algae may help facilitate both urchin recruitment and survival, protecting baby urchins until they are too big for most predators. 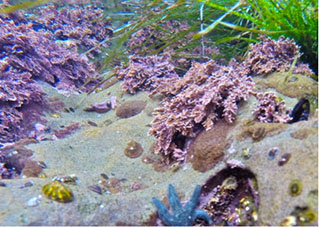 The intricate balance between predator efficiency and prey avoidance is a large component in determining sea urchin populations. The onset of sea star wasting disease has allowed some populations of sea urchins to increase drastically. But the San Juan Islands seem to be unique, in that disappearance of their top predator did not cause an urchin population explosion, and we cannot use the example of a trophic cascade from other systems to understand the full extent of the relationship between sea urchins and Pycnopodia here. Thus, further study of urchins in their vulnerable life stages will be necessary to learn how the disappearance of sea stars will change our kelp-dominated habitats. The ability to avoid predation through use of coralline algae as a refuge may be an important factor in determining predation rate, species abundance, and population dynamics. Due to sea urchins’ voracious herbivory, these interactions have consequential implications for the entire nearshore ecosystem in the San Juan Archipelago.

This research was supported by a Mary Gates Endowment Scholarship and was published as a short note in Marine Biology: Yiu D.S. and C.J. Feehan. 2017. Articulated coralline algae provide a spatial refuge to juvenile sea urchins from predatory crabs. Mar. Biol.: 164 (76).

Dara is an undergraduate in UW’s School of Aquatic & Fishery Sciences. She first joined Friday Harbor Laboratories as a ZooBot student in Spring 2016, and has returned the past two summers to work as a research assistant.