Tiny microbes are on the prowl to undermine the health of our oceans. Epidemics of our ocean biota are often unseen beneath the waves, so I have written a book about the impacts of underwater outbreaks, a first-hand account of our trials and adventures while chasing epidemics from Mexico and Hawaii to Indonesia and back to the Salish Sea. I focus on the stories of four of these outbreaks to describe how the epidemics unfolded, to figure out what microbe(s) were causing the outbreaks and to record the impacts to both ocean biodiversity and people. As a group, my students, colleagues and I have spent a lot of time underwater, so this is also a tale of our explorations, struggles and triumphs in strange places.

An excerpt from Ocean Outbreak about the Seastar Wasting Epidemic:

We had assumed in October 2013, when sent the photos from Neil McDaniel (below) showing a population of sunflower stars that were decimated over 3 weeks at Croker Island, B.C., that this was a localized event affecting a single species like the other events we had seen. Doubts about the geographic restriction of the starfish die-off had surfaced, however, when we learned in November 2013 that the Vancouver, Seattle, and Monterey aquariums had each lost dozens of stars in their tanks. Against this background, Pete Raimondi’s email saying that thousands of sea stars from at least ten species were dying fast in the waters around Monterey, California signaled something much more worrisome than a local die-off of one kind of sea star. Were we seeing the beginnings of a disease outbreak that could affect the entire Pacific coast? 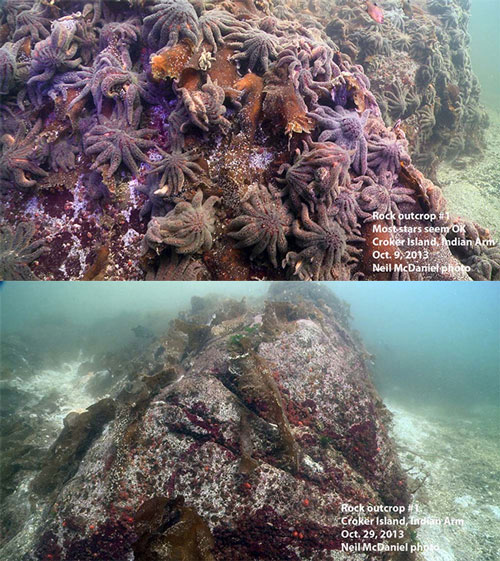 Croker Island before and after

In addition to being concerned about the broad geographic extent of the outbreak, I was worried because it involved sea stars, and not just one species but many. Sea stars may seem innocuous and almost inanimate given the glacial pace at which most species move, but they are the lions of our seascape. Even a few can control the structure and composition of the surrounding ecosystem by eating huge numbers of the mussels and oysters that would otherwise dominate. The West Coast of the United States has a bright medley of different sea star species, second only to Australia for temperate waters. There are approximately eighty species described in the eminent marine biologist Eugene Kozloff’s key for Puget Sound and the San Juan Islands in Washington. The catastrophic loss of not only ochre and sunflower stars but other species as well over a broad swath of ocean could have a domino effect on ocean ecology, causing a cascade of changes that might ultimately impact animals—such as abalone and salmon—that humans depend on for food. 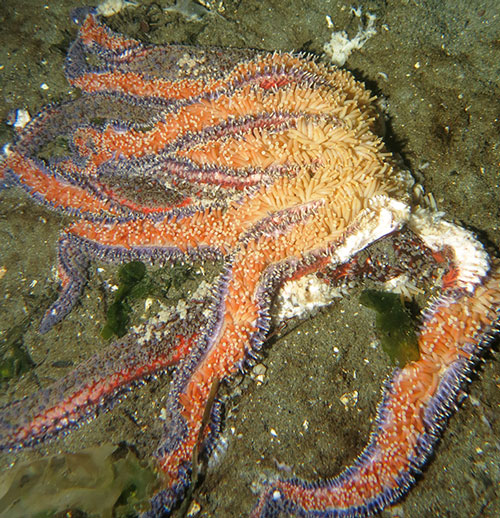 We stepped off our flight in Seattle at 4:00 pm in mid-December 2013 and ran for our car, hoping to beat the rising tide at Alki Beach. We reached the rain-slicked parking lot near Cove 1 at Alki Beach and put on our headlamps, donned plastic gloves, and pulled out our notebooks. Clambering in the dark over slippery boulders, we move down the beach toward the receding tide. Our headlamps picked up looming boulders and the edges of pilings on the dark shore as we crunched across gravel, looking for sea star bodies. Across Elliott Bay we could see the bright lights of Seattle.

“Yeah, that’s an Evasterias ,” I replied as I hunkered down to look at the deflated, ripped-off arm, tube feet moving slowly. “Oh, and I guess that’s the rest of it,” I said as I pointed to a flattened, almost-dead four-armed star.

We saw four purple stars clustered together, half in the water, with twisted arms and small lesions; we would come to recognize these as tell-tale signs of the wasting disease. As we walked along the water’s edge, we found more and more arms and parts of stars. I realized, with a sick feeling, that the beach was littered with them. Many were clearly dead, but occasionally we would find one with moving tube feet, or a star in the process of having its arm tear away from the body and walk off on its own. It was so unreal and unnerving. It was a macabre scene.

My brain was in overdrive trying to detect every clue to the cause and any patterns driven by variation in the environment. If an infectious agent was the cause, why was it suddenly breaking out? Why was it continuing into the winter? Why was it more lethal for sub-tidal stars? Was the agent killing other animals? How was it transmitted — was it conveyed in their food? How many species of star were affected? Another question with personal significance rapidly emerged: were the sea stars in the San Juan Islands sick as well? 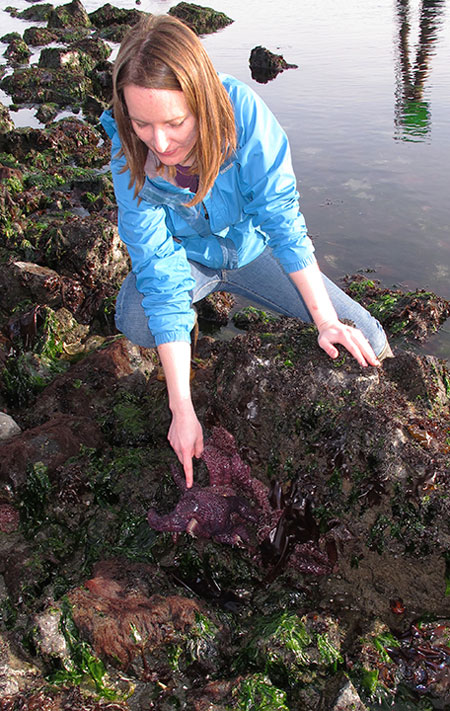 Morgan pointing to a Pisaster ochre star during an intertidal survey near Port Townsend.

Our sea star wasting epidemic research had its beginning at Friday Harbor Labs and constituted a class project in 2014 (Fuess et al. 2014) that showed the seastar immune response. In the early stages, our project relied on the help of our FHL Advancement Board. Kevin Schofield was visiting in spring 2014 and I showed him our dying sunflower stars ( Pycnopodia helianthoides) and explained the value of ecological surveys during the early epidemic.

When he heard that Arkansas school children had sent us a check for $400 raised from t-shirt and bake sales, Kevin contributed the rest. This funded boat fees for Morgan Eisenlord, Mo Turner and Pema’s subtidal diving class to do intertidal and subtidal surveys that led to key papers (Eisenlord et al. 2016) showing the huge impacts of this outbreak in the San Juan Islands and the Salish Sea.

Fast forward to 2019: we have just reported that Pycnopodia is imperiled from southern California to British Columbia and maybe even Alaska (Harvell et al. 2019). The sunflower star was the most susceptible of the 20 species infected, so it was the species we chose for our studies in 2014 (Hewson et al. 2014) to test the role of a viral-sized injectate as the cause of mortality.

In the new paper, we used citizen science diver REEF data to show the massive decline from San Diego to the Canadian border and that the timing and degree of decline was driven by temperature warming. We used NOAA deep trawl data to show that even down to 1,000 meters, sunflower star populations have collapsed. Click here for an animated figure showing both the nearshore and deep water declines of Pycnopodia. Hakai Magazine produced a video abstract, and Hakai divers contributed survey data showing the population collapse in pristine B.C. waters from Calvert Island.

Joe Gaydos (SeaDoc Society) and I are concerned about the ability of the sunflower star to recover from this epidemic, and are convening a panel of experts with The Seattle Aquarium to consider management priorities. I wrote Ocean Outbreak because I worry about the dangers to our biodiversity from infectious diseases in our warming ocean. We have quite poor data on how many species declines are actually caused by opportunistic diseases, and very few workable underwater management approaches. In Ocean Outbreak, I outline ideas for improving the health of our ocean biota. 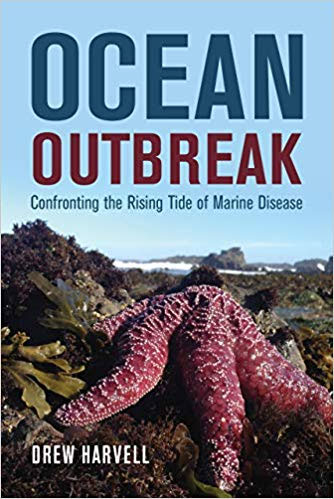 Drew Harvell is a Professor of Marine Ecology and Curator of Invertebrates at Cornell University, an Affiliate Faculty in the UW School of Aquatic and Fishery Sciences, and has been an FHL researcher for many years. She is also a member of FHL's Advancement Board. Her upcoming book Ocean Outbreak will be out for Earth Day this month.