The lab was buzzing with excitement when I arrived. A few weeks into the summer term, the water tables of Lab 3 were teeming with invertebrate life. All varieties of morphology and behavior were on display for our class to study. But something was different today: the lab had a new arrival. I was an undergraduate on my first visit to FHL in the summer of 2013. While my focus at the time was animal behavior, my experience with invertebrates was limited. I took the opportunity to delve into invertebrate diversity by enrolling in Marine Invertebrate Zoology. 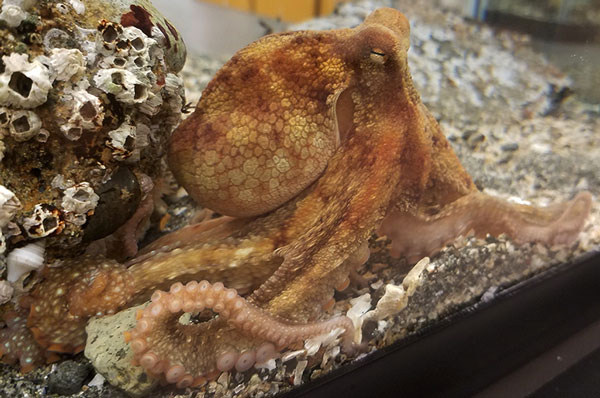 Shaped timidly into the corner of a critter container was a Pacific red octopus (Figure 1). There she waited, immobile but for a slight bob of her head, as she cautiously eyed those of us peering down at her. When the activity of the lab died down, she carefully felt her way around with her long, flexible arms. Her body rapidly shifted color when she was alerted to movement. She appeared to become interested in activity happening around her, but remained cautious. Despite these signs of acclimation, eventually there was a sudden decline in her behavior and she passed over the course of a day. While her death was untimely, it meant an opportunity to dissect and observe the octopus’ anatomy.

The skin was particularly fascinating to behold under a dissecting microscope: pearl-white and spotted with inactive chromatophores (the pigment-containing cells that generate the octopus’ camouflage) and glittering with green and yellow iridophores (Figure 2). Amazingly, the skin’s activity gradually returned. What began as an occasional pulse of activity in a sparse sample of chromatophores became a coordinated display of colored waves across the skin. This sustained chromatophore activity following the octopus’ death, I learned, is a phenomenon known as wandering clouds and was originally documented by physiologists in the 19th century. It was a brief and extraordinary glimpse into the mysterious world of the cephalopods. CLICK HERE for a video of this chromatophore activity. 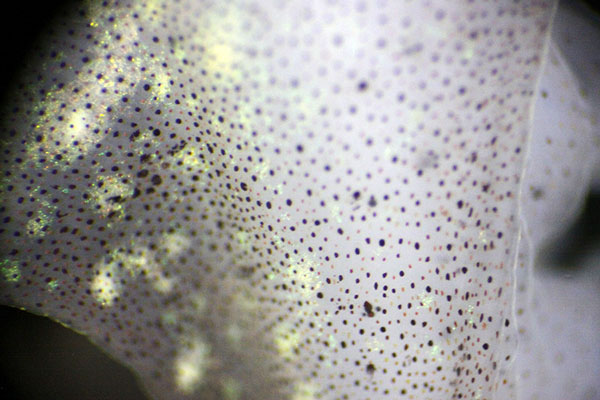 Fig. 2: Chromatophores and iridophores on the skin of a Pacific red octopus.

How did this creature evolve such incredible complexity of body and mind along a path which diverged from our vertebrate kin 500 million years ago? What has emerged on this remote branch on the tree of animal life? Octopuses, squid and cuttlefish have the largest and most complex nervous systems of all invertebrates. This is accompanied by sophisticated sensory systems, cognitive abilities and chromatophore systems which are used for both camouflage and communication. The octopus coordinates behavior across eight extremely flexible arms, each with hundreds of chemically- and mechanically-sensitive suckers. Of the octopus’ estimated 500 million neurons, 350 million exist within its arms, where it supports the complex sensory system of the suckers as well as the broad range of behaviors in which the suckers are employed, including locomotion, exploration, foraging, and manipulation. With this neural organization, the arms and suckers play a large role in the octopus’ perceptions, attention, and decision making. The octopus’ mind, I realized, is distributed into its arms.

Years after that first course, I returned to FHL to train as a scientific diver, where I learned the skill set necessary to collect my chosen model organism. Armed with these new skills and joined by a team of divers, I set out in search of our local octopus species. We quickly learned the challenges involved in finding an animal that evolved to not be found! With both the Pacific red octopus and giant Pacific octopus being nocturnal, the most likely way to encounter them out in the open was to dive at night. We spent weeks searching the dark green waters of the Pacific Northwest for what would appear to be a breathing rock with eyes. Needless to say, we had only a modest success rate. I wonder how many we missed that were right in front of our eyes. We needed a new strategy. Conveniently, octopuses frequently make their home among human debris. We began targeting areas where we would find glass bottles, jars, crates, and tires, and our success improved dramatically.

In captivity, the octopus brings another set of problems. They are sensitive to water quality and temperature, which need to be monitored closely in recirculating systems. They need dens and places to hide. Many species, including those local to the Salish Sea, will not hesitate to crawl out of the water if they feel motivated. They are also strong and can squeeze their bodies through cartoonishly small openings. Each tank, therefore, needs to be engineered to prevent the octopus from leaving. Tightly fitting lids with latches or weights are a must. Tanks can also be lined with astroturf above the waterline, which prevents their suckers from making a seal/grip. There can be no gaps large enough to fit through: not in the lid, at the water source, in the drain, anywhere. As curious and exploratory as they are, if a way out exists, they will find it. Without the challenges of their natural ecosystem to keep their mind occupied, octopuses require a great deal of enrichment. This can take the form of varying habitat elements and substrates in their tank, providing prey for them to capture, human interaction or toys. Legos usually do the trick. If deprived of enrichment, the octopus’ behavior can show a striking decline. They can stop eating, become skittish, avoidant, unusually determined to escape, or engage in self-harm.

Once all that was figured out, it was time for science. Where to begin? Exactly what role do the arms and suckers play in the octopus’ perceptions, attention, and decision making? Thankfully, the 20th century saw a number of key discoveries made by pioneers in the field, and recent decades have seen many important leaps as cephalopods grow in popularity as a scientific model in the fields of genetics, neuroscience and biomechanics. Despite the number of neurons within the brain and arms, the pathways of communication between these two levels of the nervous system are very limited. Only a small amount of information can be sent between the brain and arms at any given moment. Without information about the exact shape of the arms, for example, the brain is limited in its ability to send out detailed motor commands. Instead, a remarkable number of the octopus’ behaviors are generated by the local nervous system within the arms. Reaching, sucker adhesion, recoiling, grasping, and exploratory behavior can all be executed in the arms even when their connection is severed from the brain.

The brain appears to send global, generalized motor plans which serve to activate these locally organized behaviors, and the details of how these behaviors are executed are then determined by the sensory information gathered through the suckers. Simply put, the brain doesn’t tell the arm where to bend. It tells the arm that it needs to bend, and the suckers determine where.

Without a skeleton, the octopus appears to face a significant challenge in controlling the configuration of its highly flexible body. Being able to bend in any direction anywhere down their length, the octopus’ arms have seemingly infinite degrees of freedom. To study the strategies that the octopus uses to coordinate its arms, I design and 3D-print foraging tasks and track the octopus’ attempts to find and retrieve a food reward from within (such as a box). By varying the features of the task and the location of the food reward, I can characterize the strategies employed by the arms and suckers to search for and capture prey. CLICK HERE for a clip of a single octopus arm searching. CLICK HERE to view a video of multiple arms searching. These experiments have given me a chance to study the octopus’ distributed mind at work. Conveniently, they also serve as a source of enrichment for the octopuses, so they give us both a way to satisfy our curiosity.

As the lights begin to shut off for the night, I notice the lab denizens awake and watching my movement. I double check that everyone is in their tanks. I double check the water flow. I double check the lids. I check everything again, with what I hope is only a healthy amount of paranoia. As my eyes adjust to the fading light, I scan over the lab one last time, and leave the creatures to their nightly wandering.

Studying the octopus has been, and continues to be, a humbling journey. The truly rewarding part of this research is getting to spend so much time with such fascinating creatures, and in the process understand what it means to be a completely different form of intelligence. To that end, I am collaborating with the UW Reality Studio and a team of talented students to develop a virtual reality experience where a human can move and perceive the world as an octopus. As extraordinary and mysterious as they are, we aim to tell the octopus’ story first-hand. This project was born at FHL and continues to be supported by its wonderful community. I am grateful for all the staff, researchers and instructors who make FHL the center of research and education that it is. I also thank my advisor, Dr. David Gire, and lab mates for their support in bringing this project to life.

My research was made possible through generous support from the Friday Harbor Labs Research Fellowship Endowment, the Ellie Dorsey Memorial Fund, the Alan J. Kohn Endowed Fellowship, the UW Institute for Neuroengineering, the UW Center for Neurotechnology, and from the Ocean Memory Project. I would like to invite readers to help support these research efforts by contributing to the newly established Octopus Fund on this page. Your support is greatly appreciated.

Rowell C.F. 1966. Activity of interneurones in the arm of Octopus in response to tactile stimulation. Journal of Experimental Biology: 44(3), 589-605.